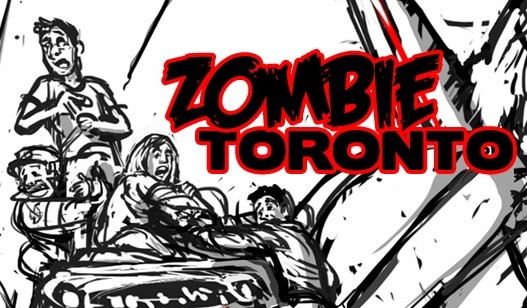 Comedy Bar mainstays Bad Dog Theatre are in the middle of a horror show. On purpose. They have one week left in their current episodic adventure, portraying Torontonian walkers and the people who run from them.

The show is a good one with a strong cast including director Peter Stevens in a happily more substantial role on stage than he had in Hogtown Empire. Standout character performer Kirsten Rasmussen plays his insufferable wife with grand bravura, hilariously desperate for attention and a cold Mike’s Hard Lemonade. The rest of the cast is a mix of the bold (Kyle Dooley, valiantly playing with a bizarre dud of an audience suggestion involving My Little Ponies) and the tepid (Simon Pond, trapped in a biodome and a punny rom-com). Ultimately- give or take the strength of any particular week’s audience suggestions- Zombie Toronto really works as an improv setup. Audience members are given a “ration” of Skittles at the door (a likeable little gimmick) and Bad Dog’s three pair formula allows for that week’s strongest scenario to carry its weakest, guaranteeing a certain baseline of enjoyment even on an off night.

As with most long-form improv, the moments of greatness require a proportionally big investment, but at $12 a ticket and just an hour of your time, it’s an investment worth making.