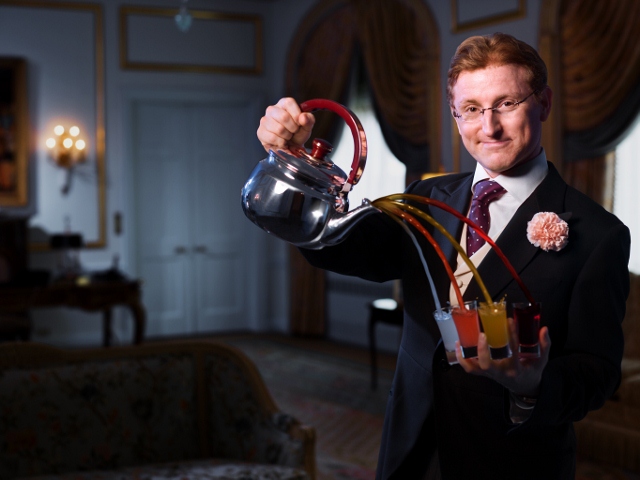 The reason I chose Chamber Magic as one of the few Luminato shows to review this year was that it promised to be simply enjoyable in a way that most of the over-lofty festival fare isn’t. I was totally down to sit in my mandatory cocktail attire and be amazed by some trickery and a lot of cleverness and- despite the over-crowded, over-heated horribleness of the chosen location in George Brown House- Chamber Magic did turn out to be perfectly pleasant, though not as mesmerizingly clever as I anticipated.

To start off, magician Steve Cohen balances very precariously on the line of defensiveness. When a trick doesn’t go exactly as planned or a chosen audience participant proves a little difficult, the man whose job it is to be ten steps ahead of everyone seems to get a little jumpy and his charm begins to wear thin. This would be fine if the majority of his tricks were up to the standard set by his best one- an old vaudeville game called “Think a Drink” that involves a trick teapot, a well-stocked bar, and (I’m assuming) an extraordinarily well-trained assistant. Terrified of audience participation as I am, this is one show where it pays to get picked on, especially in “Think a Drink”, because those picked and they alone can really verify specifics like Cohen’s claim that the red wine that appeared was really a 2006 Cabernet as demanded in the moment as opposed to written down beforehand. My money is that it was a generic red wine and the specificity was a combination power-of-suggestion mindtrick and gamble that the drinker wasn’t an expert.

Clearly a skeptic, I spent most of my time dissecting the scenario and trying to guess the tricks. Beyond the brilliance of how each drink (written or otherwise) managed to get into the multi-compartment pot, there were few that I couldn’t at least start to see the mechanism behind, leading me to believe that someone smarter than me would see through Cohen almost instantly. Yes, I know that such skepticism inherently robs me of the possibility of really enjoying such a show, and yes, I know that I’m ruining it for myself and others by being such a stick in the mud. But I like to be amazed, especially when someone is billed as brilliant and brought in specially for the occasion (Cohen’s American specificity showed to the point of limiting his act a bit in front of a Canadian audience. This got me thinking about why Luminato sought him out instead of finding a Canadian of similar talent, something that annoyed me more the more I thought about it). I want my expectations surpassed; I want someone who can make me believe. Cohen did entertain me, but the only thing he made me believe was that he’s well-practiced and owns one truly special teapot.