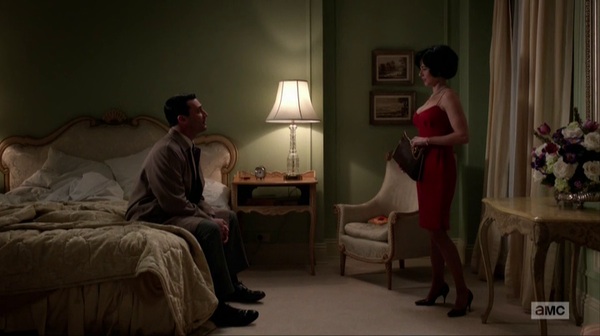 “It’s easy to give something up when you’re satisfied.”

Welcome to Fifty Shades of Mad Men. This week we saw the new partners move into the Sterling Cooper Draper Pryce office, Peggy chafed under her new/old bosses, Pete aced like a slime ball and Don went into full sex master mode.

Don likes power, he likes being in control, and he doesn’t like it when his control is challenged or threatened. With the new partners and other employees of Peggy’s new firm moving in as a result of the merger seen in last week’s episode, Don feels the need to assert himself. This need extends to his personal life, to his affair with Sylvia. He overhears a massive fight between Sylvia and her husband, and knows that she is in an emotional vulnerable state. When she calls him at the office for a rendezvous, he instead has her meet him at midtown hotel. Once at the hotel, Don begins to order Sylvia around, like he is her master. When he leaves, he orders Sylvia to stay until he gets back, whenever that happens to be. What is surprising that Sylvia totally went along with all of this. Don comes back and leaves again, and she still stays. Don returns a third time, needing to feel in control of something, only to be met by Sylvia, suddenly determined to end their affair. She just spent all day obeying his every order, but now it’s seems that she was just trying to escape the emotional pain from her marriage. Real relationships, and marriages, are complicated, so Don manipulated her so she would respond to something simple, like being ordered around, and uses her to satisfy his on needs. When Sylvia ends their affair, a tearful Don begs her not to, but he is really upset by what he feels is a loss of control over his own life. I know Don is the protagonist and we’re supposed to feel for him, but it was really difficult to care about his feeling after watching him creepily order around Sylvia all day.

Joan gets a bigger role in this episode, not merely supporting the other characters. On moving day she is quick to assert herself with the new staff members, even as a mysterious pain in her abdomen gets worse and worse. She can’t leave or give any indication of discomfort because that would be weakness. It’s up to Bob Benson to help Joan make a concealed escape to the ER, where she is diagnosed with an ovarian cyst. Bob turns up at her apartment the next day, ostensibly to check up on her, but really as a chance to flirt and drive up the level of sexual tension between them. At this point I should probably mention that NONE OF US HAVE ANY IDEA WHO BOB BENSON IS. He is a new character that just showed in the first episode this season, and all the characters acted like they knew him. There are tons of crazy fan theories regarding his character, but so far he has remained very mysterious. Bob has been in every episode this season, getting more and more screen time, so it certainly feels like the show is building him toward something.

There’s more bad news for Pete this episode, after his mother is revealed to be suffering from some form of dementia. Pete’s brother passes responsibility for her onto him, and Pete has to move his mother into his apartment with him. This gave us a couple good scenes of Pete’s mom constantly poking at him, while Pete, never missing an opportunity to be a jerk, uses her confusion to get her to stay inside. The payoff comes at the end of the episode when she wakes up Pete to tell him “that Kennedy boy” got shot on tv. Pete angrily reminds her that the JFK assassination was years ago and goes back to sleep. We then cut to a shot of Megan and Don, facing opposite directions, as they listen to the death of Bobby Kennedy on the news. It’s a poignant moment and both are upset, but for entirely different reasons.

I like Ted a lot. It seems like this season of Mad Men is built around people call Don out on his BS, and Ted is just perfect for doing that. Ted is to his firm what Don is to SCDP except, you know, not a huge jerk to everyone. When we first met Ted back in season four, he was an impressionable young executive that Don fooled into breaking the rules for a Honda presentation, thereby losing the account. This was the start of their rivalry, which continued with prank phone calls and attempts to woo various staff members away from SCDP. We finally saw Ted succeed when he convinced Peggy to leave at the end of last season, and the audience ended up rooting for both of them. Ted had seemingly evolved away from the Draper archetype, and was much less obnoxious by this point. It seemed like Peggy would finally get the attention and appreciation that her work deserves.

Then last week’s merger happened, leaving poor Ted in Don’s sights even more than his was before. When Ted walked into the new offices, it seemed like Don was already looking for a window to push him out of. Ted makes it a point to set himself apart from the other partners when he gives up his seat at a meeting for his secretary. Ted is cool, and unaffected by the desire for extreme internal competition that seems to define everyone else at SCDP. Or at least that’s the image he projects, and it’s entirely possible that this is Ted method for working himself into the fold, his cool façade could be just as fake as Don’s.

Don makes it a point right away to assert himself over Ted, and gets him blackout drunk at the office, embarrassing him in front of the junior workers and forcing him to sleep on the floor. This mirrors a scene way back in the early seasons show, when Don forced a drunken Roger to climb a dozen flights of stairs after eating seafood, resulting in Roger vomiting right in front of clients. Nobody uses alcoholism to such a personal advantage like Don Draper. Ted is not stupid and realizes what Don has done to him, and quickly plans his counter attack. Peggy even takes the time to talk to her old (and now new?) boss, telling Don that she was hoping Ted would rub off on Don, not the other way around. Peggy clearly has respect for both men, but she knows that Ted has geared himself towards long term success without the same amount of personal destruction.  Ted does get his revenge when he flies Don in his personal plane to a meeting upstate. The weather is bad, and seeing Don red in face, terrified, and on the verge of being sick, while Ted remains cool and collected, was priceless.