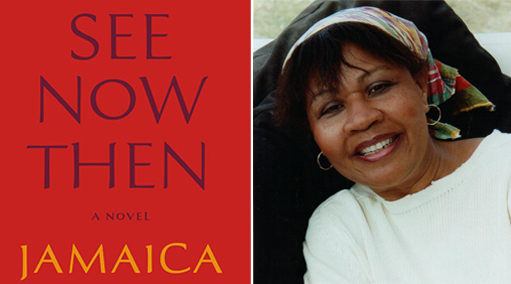 See Now Then by Jamaica Kincaid

I haven’t had a whole bunch of exposure to Jamaica Kincaid. I read Girl (which fairly blew my mind, GO READ THAT!), so there’s that, I guess. But I’m no expert. I’d never read one of her novels before See Now Then. I don’t know much about her life—I mean, I’ve heard that this particular novel is very ~semi-auto-biographical~ but what I’m saying is, that’s something I’ve heard, not something I really know enough about to bring to you with any certitude. Anyway.

See Now Then is a short, dense book. It can be tough to get through, delicious, decadent, simple, and it packs a wallop. Sometimes all at the very same time. I know that feels rather contradictory, but it’s a peculiar little book, so it’s all true.

I had mixed feelings about See Now Then.

On the one hand, I love Kincaid’s writing style. She piles clauses and phrases one on top of the other—never-stopping thoughts within thoughts within thoughts—which by the way reminds her of something only slightly different—until you figure the pile ought to be high enough to reach the moon (except you’re not sure that you were even vaguely climbing up before and now you don’t remember where you came from). The point: Dense, dense, dense. At least, in terms of the relentless torrent of thought that flows steady and unceasing. The words are simple. Generally, they’re pretty pretension-free (this particular book has some Mythical trappings), detailed, specific, but not fluffy or flowery or anything else that sounds like it should be pronounced with an exaggerated “fluh” and an eye-roll. I love her word smithery, is what I’m saying.

In the case of Girl, Kincaid’s writing style is not only unique and stylish but forceful and useful. It absolutely builds an oppressive wall of ought’s and should’s and ludicrous, unfair, mutually exclusive expectations/instructions for “good” girls, snide comments about how doomed the narrator is to never be a “good” girl. It makes you want to smash it. It’s a page. It’s amazing. And in that, Kincaid’s style has a real purpose. And not just purpose—force, weight, power.

In See Now Then, that same style is less exhuberant and more muddled, superfluous-seeming, and sometimes burdenous. I’m not saying that’s unintentional, but it is definitely less rousing and exciting. But I’m sure that has at least a little to do with my feelings on the subject matter of See Now Then.

Which is a little domestic drama about an American nuclear family. They live in a house with a mother, father, son, and a daughter. Two kids. Thank God no dog.

If you haven’t guessed, domestics are not my jam. I like when mom’s a spy, dad’s an alien, little Jack and Janie are actually trolls, etc, etc, etc. I love crazy stories, humor, green unicorns, pirates, monsters, all that.

Alas. Not so with this book. Just. Varying degrees of subtle-to-homicidal thoughts around mothering and fathering and general interpersonal/familial dynamics.

That’s not to say that the book is poorly done—I just… it would never have been my favorite.

Most of my favorites can be described as, “It’s a (funny) apocalypse.” Yes. Really.

And I don’t hate domestics, per se. I just don’t usually find them fascinating or relevatory or particularly fun or exciting or whatever. Some of them are, I will admit, important—but if it doesn’t hit me like a sledgehammer then I’m not usually too jazzed up about it (for an example of Sledgehammer Domestic Drama, see Albee’s Who’s Afraid of Virginia Woolf?).

See Now Then does domestics well. The issues of mothering, wife-ing—the feeling of needing to sacrifice or hide any personality independent of the role—the gendered and other unspoken but palpable roles, expectations, etc. are all interestingly explored. There’s some minor exploration of foreignness and otherness. The feelings—odd, subtle, and slippery, are all very carefully and fully developed. And they’re real. Kincaid’s tragedy of the modern unhappy family is murky and honest.

But it is long. Exhaustive. Repetitious. Sometimes boring.

I have already admitted that domestics and I are hardly ever friends. But—and this is hard, because if it is ~semi-autobiographical~ (or even just autobiographical. Hold the semi), then I understand the length.  If that’s the case, I understand the exhaustive, thorough exhuming of memory,  of “what if,” and slow, painful reanimation of the marriage of Mr. and Mrs. Sweet. It’s still not my favorite book, but I empathize better.

And possibly, for a different reader, this book will be relevatory. It could be a representation and explanation that speaks to them.

I can recognize the seeds of that in there.

But I’m not at a point where that speaks to me. I want swashbuckling and absurd humor and mad cubist colors.

It’s pretty good, but it’s not for me.