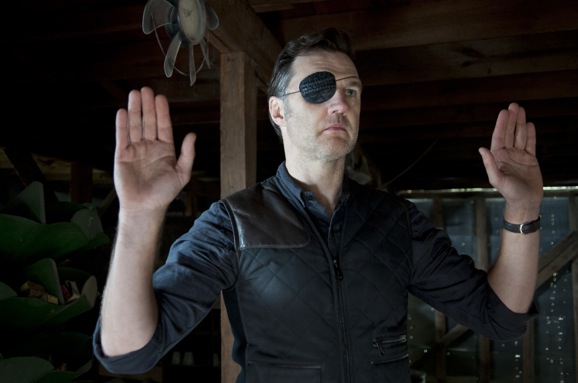 The most recent episode has the Governor and Rick meeting for a showdown in a dingy barn. At first, I was expecting a few pithy comments, a quick draw, and the death of the Governor. Then I remembered I wasn’t watching Justified. This is the Walking Dead, where tension often gets ratcheted to eleven.  Soon we see that this was a scheduled affair, like two diplomats looking to avoid war for their respective sides. Rick wants a dividing line between the two camps and an agreement to let one another simply be. The Governor wants absolute surrender, oh, and Michonne.

Should we believe anything the Governor says? Probably not. He makes a demonstration to Rick by hanging his gun belt up, but as he sits we see he still has a weapon within an arm’s reach, taped under the lip of the table. Rick seems willing talk because he knows his people are outnumbered and out supplied. Thankfully this is a recharged Rick, fresh off last week’s encounter with Morgan. This Rick is a touch more rational than the one chasing hallucinations of his ex-wife and taking calls on an unplugged phone. So when the Governor says if he gets Michonne the rest of the group goes free, Rick can recognize this as a lie.

While the two men are hashing out the details of their mutually assured destruction, other members of the group are learning a bit about each other. Daryl meets his equivalent from Woodbury, Martinez. Herschel speaks with Milton, Woodbury’s scientist/historian. Meanwhile, Andrea stands around and pouts. The most noteworthy of these interactions is between Milton and Herschel. Milton has towed the line for the Governor. He has questioned some of his actions, but has not gone so far as to defy any of his commands. Milton’s talk with Herschel humanizes Rick’s gang for Milton. Upon returning to Woodbury, the Governor outlines his plan for ambushing and killing Rick’s group if they choose to hand over Michonne. Milton doesn’t like the sound of it and labels it a slaughter. The Governor shrugs it off but the generally even tempered Milton doesn’t hide his concern. This may be the Governor’s key mistake, worrying too much about revenge and the end of Rick’s prison dwellers that he underestimates Milton. I’m starting to waver on my theory that this season will end with a John Woo style gun battle between Rick Grimes and The Governor. Woodbury may just implode, with Rick and company scavenging for backpacks.

Rick says war is coming, something the prison-dwellers have known for a while. Now they have a timetable; two days. Well, two days for Rick to decide if he’s going to hand Michonne over to the Governor.  Of course what’s discussed in the dingy work shed remains between the two leaders, except for a final scene where Herschel and Rick discuss the Michonne option. Herschel cites Michonne’s worth, but we see what Rick is agonizing over. If there is any chance the Governor is genuine in his offer, should the group hand over Michonne for their own greater survival?

Turning Michonne into the custody of the Governor takes the narrative into further darkness. I understand it’s a bleak and tragic world, but as we choose our entertainment there is only so much darkness we as an audience can cope with. My worry going into the second half of this third season was the decreasing likeability of the main characters. At least I had Carl to latch onto. Rick’s starting to come back to the sunny side of the street and the show is picking up momentum. That’s the thing about the zombie apocalypse, no matter how much progress you make you’re still one bad move away from everything ending in a spray of blood and bone.