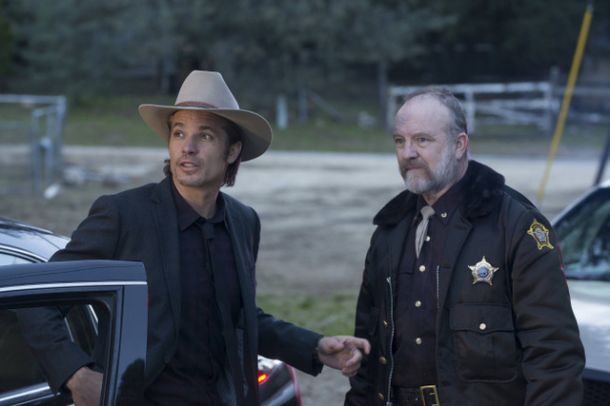 It was a straightforward, long-awaited Justified this week. In an opening scene, Raylan spells out that to “hash something out” comes from the French for cut; like hatchet, or as Raylan puts it: to cut through the bullshit. And that seems to be the intention of this episode.

First and foremost – and huge spoilers ahead of course – by episodes end, Drew Thompson is revealed. Rather, when former Sheriff Hunter says to reccurring character and current Sherriff Shelby, “what now, Drew?” the last word is essentially followed by a rainbow, an elbow to the ribs with a wink.

The writers have been dropping hints all season (lots of throwaway moments: the Drew Thompson file open on his computer in the background, him asking after his former widow) with the biggest one being last weeks speech to Ellen May. Ellen May, unsure of life outside prostitution, is reassured by Shelby that we become what we pretend to be.

Drew Thompson is not one of the Clover Hill elite, but truly a Justified regular. Drew stole $2 million dollars worth of cocaine, getting away with it by murder of a wife-beater and taking the eye of a mafia boss, in order to become a small town Sheriff. The stories, stylized dialogue, body count and swagger of Justified may be exaggerated, but it’s characters, and their motivations, are rarely grandiose.

Shelby is a likeable, up-standing character and what’s more, having him deeply ingrained in both the criminal and police worlds of Harlan County is definitely going to make the remaining episodes interesting.

The plot of the episode is fittingly straightforward: Raylan deals with his father’s death by taking control of Sheriff Hunter’s prison transfer, and thereby trying to regain control of the Drew Thompson case. Along the way, he conveniently picks up Drew Thompson himself.

The big reveal comes from Constable Bob, after Raylan stops a comedic shoot out between Bob and the Clover Hill elite – Bob reveals that his “go bag” from episode one contains an automatic rifle. Raylan’s eureka moment leads him to Shelby’s house, where Boyd arrives on his own mission, whereupon the light bulb turns on for him to.

Boyd arrives (at Shelby’s and at the realization) having spent the episode cutting through his own bullshit. I have found the Colt/Ellen May storyline almost irretrievably dark, and so I am glad to see it end. Cousin Johnny finally tells Ava and Boyd what he has known for weeks, that somewhere, Ellen May is still alive, and Colt has been lying.

Boyd and Tim (who is taking last week’s murder of his friend into his own hands) quickly start closing in on Colt, but it is Boyd who must deal with Colt, and Tim allows him to do so. In an intense scene, Boyd tells Colt that he has no idea what he has done. Colt has not just endangered Boyd, but his future, and more importantly, Ava, by telling Shelby that Ellen May is alive.

And so the episode ends with Boyd’s convenient arrival at Shelby’s house, filled to the brim with police officers. Instantly, Boyd realizes why – and so, both men’s search for Drew Thompson may truly begin.