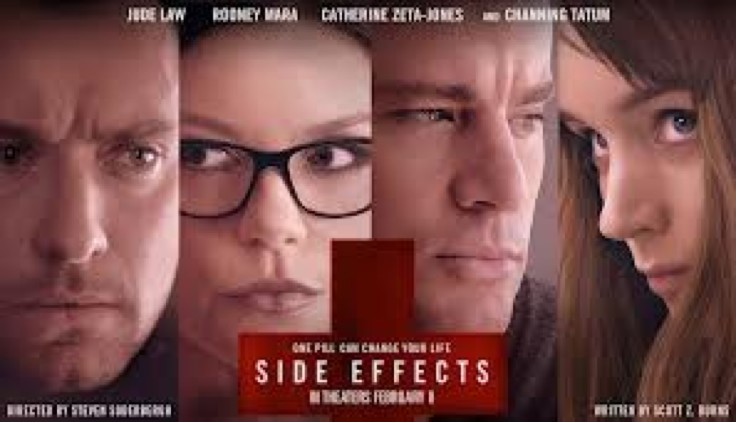 I wasn’t sure what to expect walking into Side Effects, Steven Soderbergh’s supposed last feature film. I went due to a never-ending love of Soderbergh, and a desire to see Rooney Mara outside of her mostly-naked, seriously angry Girl With a Dragon Tattoo context. Until the clearly marked SPOILER WARNING, I will try to avoid spoilers in this review, to help you go into the film in much the same way.

Because Side Effects is an easily spoiled movie, and speaking as vaguely as possible, I’m not sure it entirely holds up under scrutiny or benefits from pre-knowledge. It is definitely, however, a showcase for Soderbergh’s talent for elevating genre fair far beyond the confines of genre and worth checking out.

When I saw the previews, I thought I was walking into a dialectic on the hazards of our prescription drug culture. You’ll be forgiven if you don’t remember the previews (despite how famous HE is, Soderbergh’s films have a talent for sliding in under the radar), but they basically featured a sad looking Mara taking prescription drugs from a smarmy looking Jude Law, much to the bemusement of her husband (Channing Tatum). It was all intertwined with an air of mystery and dread, and dappled with ominous speeches from Catherine Zeta Jones. It seemed like The Constant Gardener or Promised Land, movies with a clear agenda to tear down an institution.

Instead, Side Effects is… well two different kinds of movies. The first half is a stunning portrait of depression so deep it transcends reason. The second half is a surprisingly sexy noir thriller. Both halves work due to the talent of Soderbergh, and the excellent performances by the actors.

But I questioned a few casting choices, and there’s really no way to discuss this without getting real spoilery up in this piece, so please, please enjoy a nice big SPOILER WARNING. Seriously. This is a movie that should probably be gone into cold, so I implore you to stop reading here, content in the knowledge that this is a well done thriller featuring good acting, excellent direction, and a few questionable choices that we can debate after you’ve seen the movie.

Okay, here goes. A major plot point involves the true motivations of Rooney Mara’s character, and specifically the way she feels about her Wall Street trader husband, Tatum. At the beginning of the movie, Tatum is freshly released from prison, where he served four years for insider trading. We’re given to believe that Mara had a slight breakdown following his arrest due to her whole world falling out from under her. During this breakdown, she saw Zeta-Jones’ shrink. Later, after Tatum’s release, Mara becomes depressed again, and goes to see psychiatrist Jude Law. After a slight amount of goading, Law prescribes her Ablixa, an anti-depressant, which causes Mara to sleepwalk. During one of her sleepwalks (HUGE BLINKING SPOILER ALERT NOW), Mara stabs Tatum.

And now things get really weird. When the media finds out about the sleepwalking and Ablixa link, Law’s whole life falls apart. And as it disintegrates, he begins to think he sees a forceful hand pulling it apart. As he studies this hand, it leads him to question everything, including Zeta Jones and Mara. In the end, the film’s center shifts from Mara onto Law. His final success is the film’s climax, and I think we are supposed to feel happy along with him.

Here are my problems with this. They start with the casting of Channing Tatum, who is charming and lovable, but never once seems like the money-hungry amoral Wall Street type. Maybe this is intentional by Soderbergh, or maybe he is just blinded by how much he likes Tatum as a movie star, but either way it made the revelation that Mara may have been intending her husband’s murder due to her anger at him feel fake. If Tatum had come across more like a wheeling and dealing douche, I would have bought in more to this plight. This isn’t a dig at Tatum – he’s perfectly adequate – the script just doesn’t give him enough to do, and his essential goodness (which makes us side with Tatum whether he’s playing a stripper, a star soccer player, or a wannabe hipster in a fedora) shines through.

No, my bigger problem comes with the ending, when Law gets his comeuppance on Rooney Mara. Law has pretty much always seemed weasely to me. Even when he plays “sincere” characters, he always has this slight hint of deviance to him. It makes him an electric performer, and adds dark shadings to movies like Closer or Gattaca. But in this movie, the script flips and wants us to root for him to defeat Mara. The problem is, Rooney Mara is the archetypal wronged female; her conviction and strange innocence make you root for her even as she rapes and tortures in Girl With a Dragon Tattoo. She is so intense and believable that you fall into her. There was no catharsis to be had, then, when Law succeeds in chemically lobotomizing her.

This may all be my own problem. Others may feel tricked by the movie’s lies in a way that feels less like the film was clever, and more like it was manipulative. I had no such problems. I loved the way the story came together. But there was no catharsis to me in Law’s victory, which made me feel like the film, as a whole, was unsatisfying.

*Obligatory feminist side note: I was sort of fascinated by the film’s treatment of women. Soderbergh has always been obsessed with sexuality and gender (see most of his films, but especially Sex, Lies and Videotape), and I’d like to see more discussion of the fact that nearly every woman in this film is mentally unstable and/or evil. I don’t think this was misogyny so much as intentional deconstruction, but I’m not equipped to do the requisite analysis.