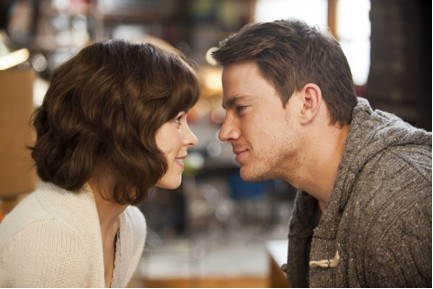 What to Expect from The Vow

The movie itself is no worse or better than the trailer. It plays right on the overwrought/adorable line, and for me, fell just barely on the adorable side. It’s an inherently silly movie made out of an intriguing premise. McAdams plays Paige, a successful Chicago-based sculptor who is married to Leo (Tatum), a music producer and hipster. They’re adorably hip and urban (they wear silly hats and get married by their friend in the middle of an art museum, without permission). They’re considering having a baby.

Then, in a beautiful Chicago snowstorm, the two are in a car accident. Paige wakes up without remembering the past six years of her life, her brain still back in the days when she was a conservative law student striving to make her parents happy and in love with a slimy, grinning fiancé played by Scott Speedman. The rest of the movie, as the trailer clues you in on, is about Leo’s pursuit to win Paige and figure out what their life looks like together, and Paige’s attempts to figure out who the hell she is.

Like I said, pretty intriguing, if overwrought, premise. But this isn’t an in-depth character drama, it’s a silly romantic trifle being handed out for Valentine’s Day. So Leo is the ideal man, played with a sensitive and romantic vulnerability by Tatum, who’s never selfish, who never seemed to fight with pre-trauma Paige, and who’s one compass throughout the film seems to be doing the right thing.  Channing Tatum is actually really good at this part, although he’s somewhat less convincing as a sensitive, music-producing hipster (through no fault of his own, but what hipster really spends that much time at the gym?).

For me, the most intriguing character was Paige. As rendered by McAdams, she remains an endearing presence, trying desperately to grab onto the familiar in the face of the horrifying reality of her situation. At times, the character should feel unlikeable, but McAdams (and that ridiculous toothy grin of hers) keeps her feeling real.

The movie succeeds, largely, because it manages to never give itself over to irony while still not taking itself entirely seriously. It’s a cheesy, uncomplicated film that believes in true love. It doesn’t quite earn its “true love” destination (far be it for me to compliment The Notebook after years and years of mocking it, but when Noah and Allie get together at the end you feel like you know what their life together is going to be like – here you feel like you know what an idealized clip show of their life would be like), but the likable leads and genuine chemistry make you happy it got there anyway.

As I said, you already know if you like The Vow. So rewatch the trailer, adjust your expectations, and then decide whether or not you should see it, or go watch The Notebook again instead.