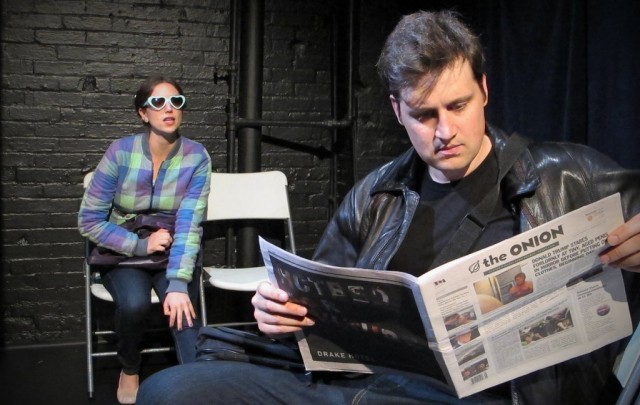 With Love and a Major Organ… and Vlogs

This show has led me to realize that “falling” in love is a rather ominous term.  It appears that relationships are doomed from the beginning, especially ones that have started off as a coup de feu: too intense to really survive their original spark.  It seems like this is the case between Anabel (Julia Lederer) and George (Robin Archer) who follow each other on a strangely romantic subway escapade that slowly moves from charming to doubtful to desperate, and, eventually, a fizzy finale.

As a huge fan of larger-than-life (that’s what theatre is right?) sweeping metaphors, and the son of a man with a heart transplant, I was extremely captivated by the concept of the kidnapped heart to articulate not only the idea of what it means to be left broken by love, but also, interestingly, to explore the mind and actions of those who take our hearts hostage without explanation.  Despite the fact that her attraction may be one-sided and highly inflated, George, truth be told, has displayed ambivalent gestures, made uncertain comments, left ambiguous notes, and incomprehensible audio recordings behind, all the while having taken something way too precious: a ladies heart!  Meanwhile, Mona (Martha Ross) attempts miserably to gather the pieces of her life, seeking to understand where she went wrong with her son, and desperately trying to break free of her loneliness.  The entire cast does a wonderful job of using voice and body to inject this absurd and fantastical story with “heart.”  For instance, if one minute we find ourselves laughing at how ridiculously unscrupulous Anabel must be to communicate with a practical stranger via cassette tape and later a whole array of current information technologies, the next minute we sympathize with someone who is just seeking a human response.  With Mona we laugh at how unaware she is of her embarrassingly uncouth mannerisms on speed dates, but then, seconds later, we feel sorry as we witness a vulnerable character grappling with isolation by hiding, ironically, behind “Google shrink”.  One of many hilarious word plays in the play, Google shrink, is in actuality, a service that reduces the length of URLs for use in social media, but here it becomes an online psychologist who examines things like intonation in a virtual patient’s voice before emailing advice.  As far as George is concerned things appear a little less oppositional: his behaviours appear to sit somewhere among the jurisdictions of mental illness, virtual personality disorder, or actual transplant patient.  After all, he does eventually give back Anabel’s heart only to replace it with a new one – a better fit – but I suppose this all leads back to the original metaphor.

As Anabel’s “night weeping” comes to an end and her rebirth demonstrates, sometimes it just takes time to show us that the heart we intended for ourselves is not exactly the right fit.  And, in fact, after the entire struggle, having come to terms with a new way of being, she initially resists taking her heart back.

Weaved throughout the script, as mentioned, are a long list of information technologies, from phone apps to Craigslist to blogs to chat-rooms to vlogs.  The latter becomes a critical mode of communication as a desperate Anabel attempts to relay video messages in hopes that an ever unreachable George might come across them and learn how badly her failing body could use its most precious organ.  In the absurdity of it all, she remembers to end each of her aloof posts by casually acknowledging all other viewers of this public forum, despite her videos having an obvious one-dimensional purpose.  The fact that we don’t get a full grasp of George’s motivations is significant.  As much as Anabel still embraces the nostalgia of the past with her love of cassette players, George is caught in a more uncertain state of being, one which is rather common these days.  Technology has certainly made the entire world accessible from our pockets but the diffusion of information has also led to widespread insignificance and, ironically, a reduction in critical thinking, as well as, communication abilities.  Archer does a fantastic job at capturing the nuances of this troubled, yet hopeful character, making him a pertinent case study beyond the stage.

With so many plays out there that make only small reference to the internet and other media, the talented Lederer who doubles as playwright, has infused this script with endless cultural references while carefully imparting a discussion of their social impact.  It is clear why this show has captured the hearts of so many, having sold-out at the 2012 Toronto Fringe and, now, playing to packed houses at the Next Stage Festival.