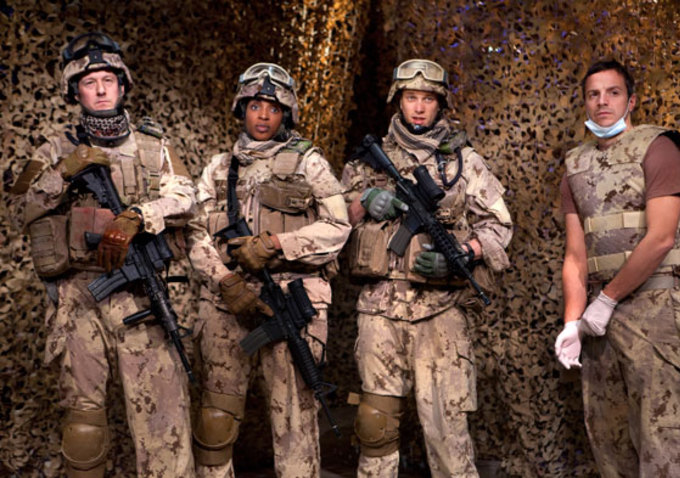 This is War by Hannah Moscovitch

Hannah Moscovitch is such a solid playwright. Her works is so consistently good it’s beginning to border on predictable. It’s rare that I’m completely enraptured by a Moscovitch piece but I’m always impressed and effected. She chooses hard subjects and captures them vividly with sharp, realistic dialogue and rich characterizations. A Moscovitch play is the perfect contemporary actor’s showcase and she attracts casts of a calibre that reflect that. For This is War, currently playing at Tarragon, director Richard Rose conducts a quartet of big talents each in compelling and diverse roles.

Stratford standout Ian Lake plays Joey, This is War‘s most dramatically conflicted and tragic figure, and he’s every bit as good as he’s always been (meaning marvelous- likable, detestable, pitiable and ultimately heart-wrenching). Unlike Lake, Ari Cohen’s recent work hasn’t showcased him at his best, but with This is War he’s finally in a role that fits like a glove. He was a bit too plain-spoken for the slickness of Speed-the-Plow and too steady and mature as waffling golden-boy Biff Loman, but “Sarge” fits just right with the wry machismo, leadership presence and ruling moral centre that Cohen plays effortlessly. This was my first time getting to see Lisa Berry in action and she’s likewise excellent as the lone woman in a suffocating Afghanistan base. Berry’s character is the anchor of Moscovitch’s play and she holds down the fort with surefooted intelligence and the perfect melange of tough-girl act and compassion-as-vulnerability. This was also my first encounter with Sergio Di Zio though my plus one nearly died of happiness when the Flashpoint star stepped on stage. Di Zio’s character, an army medic, fades into the background a bit but is a crucial calming voice amidst the big soldier personalities and ultimately hits a key emotional moment as the pieces of the narrative fold together.

That narrative follows a non-linear structure that is effective in emphasizing the idea of perspective and there being at least four sides to every story. It’s not, however, all that inventive and most of the revelations it leads to are less revelations than confirmations of assumptions I was able to make after seeing the first perspective. But that might be an indicator of how relatable Moscovitch’s characters are- their every move made sense to me, there was no big twist to throw everything up in the air, everything was grounded in strong character reality. The use of an off-stage interviewer dispatches exposition effectively and allows for some beautiful character moments within self-revelatory (and fantastically written) speeches. The all-encompassing dressing of Tarragon’s intimate Extra Space traps the audience in the claustrophobic story with the characters and the lighting illustrates the feeling of moments brilliantly through the use of selective darkness. Such immersive choices might have worked better without the distancing device of the interviewer but they were incredibly effective within the flashbacks that make up the majority of the action.

The playwright’s focus here is on Canadian troupes in Afghanistan- a largely overlooked subject amidst contemporary war narratives like the great American Iraq war play Fallujah– and she dives in with a brave eye towards ambiguity. This is a group of four heroes who all do questionable things in a terrifying place, and they all contribute to each others’ misery in some way or another. Moscovitch shines a light on massive issues like sexual harassment within the military without making her play a morality tale or exposé. It’s a story about four good people in a bad place and all the gray area that that produces.

This is War plays in the Tarragon Extra Space until February 3rd.