A Superb Weekend of BU Theatre

The weekend of  April 21-23rd was a phenomenal weekend of theatre in the BU community. I was lucky enough to see 3 excellent shows in two days on Thursday and Friday, all very different. Here’s a quick rundown of the awesome: 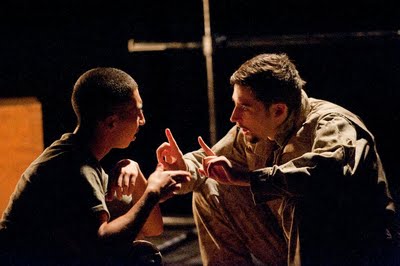 Fallujah has become something of a huge success story for BU theatre in the year since it was first staged. CFA ’10 graduate Evan Sanderson’s superbly moving script has been receiving accolades and awards across the country, and rightly so. His story of a journalist embedded in a marine unit in Iraq is smart, affecting and surprisingly funny. It delivers the horrors of war and its psychological effects but also allows the characters to be whole people, clinging to lightness wherever they can. There is a fundamental goodness to all Sanderson’s characters that quickly became my favourite thing about the piece. No matter how destructive, dark or limited they are throughout the play (these realities never being skirted or ignored), the well-intentioned heart is always evident, a truth very refreshing in such an upsetting piece. Of course this fact makes it all the more heartwrenching when these characters who’ve been so easy to invest in are thrust into grave danger in the battle of Fallujah. But that sort of ‘edge-of-your-seat, shaking uncontrollably, mad-at-the-playwright-for-putting-you-through-that’ effect, that’s good writing.

Script aside, the rest of the company pulls their weight beautifully. Director Jason King Jones infuses the play with an excellent sense of space and use of movement. The cage-like setting (designed by John Traub) allows the marines to bounce off the walls and swing from bars, driving home their outrageous strength, boyish energy, haunted restlessness and general lack of peace. Jesse Sheldon’s lighting design is wonderful, as is Stephen Dee’s sound- both do so much to establish the sense of place and highlight the haunting element of memory in the play. The high-pitched hum that lingers over the room after a large explosion is a perfect example of how Dee’s work draws the audience into the experience of the characters. 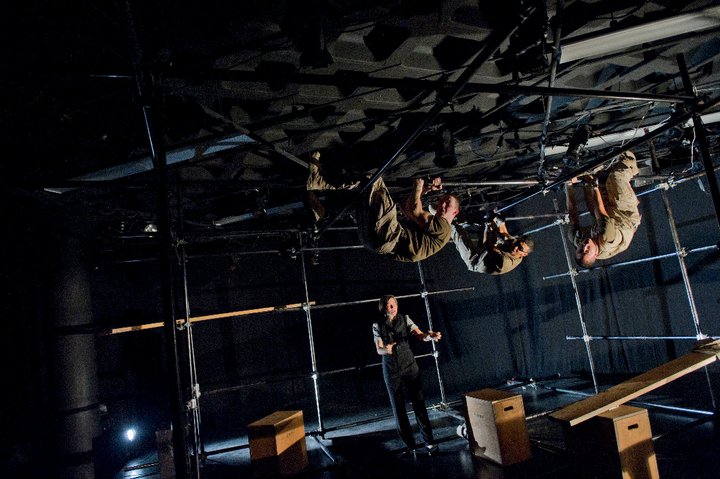 All this pairs with an exceptional ensemble cast. Alex Mandell anchors the piece beautifully as the journalist at its core. As the outsider coming into the unit, Mandell is the audience’s window. We understand him less and less as his experience pulls him further and further away from the world of coffee shops and blogs he enters from, but Mandell’s sincerity keeps us invested, dearly wishing we could understand again, make his journey a little less solitary. Experiencing that along with us is Marion Le Coguic as the lone woman in the play. As Mandell’s love interest and the sister of a devastatingly wounded vet, Le Coguic finds the perfect balance between supportive, understanding and unable to play the martyr. The character is the only one who doesn’t go through a war but her story represents the millions of loved ones who are irreparably hurt by it, something Le Coguic captures beautifully as the heartbreakingly conflicted character.

As the marines, Andrew Mayer, Matt Ketai and Mat Leonard create a fantastically cohesive unit. They seem as though it’s been just them against the world for quite some time- an almost impossible dynamic to sell onstage, especially by a cast as young as this one. But as perfectly as they fit together, their individual identities are as detailed in construction and execution (yet another credit to Sanderson and Jones as well as the actors themselves). Mayer, tasked with a real character and a hallucination, separates the two fairly well, infusing both with an endearing humanity as well as a haunting melancholy. Leonard, finally in a role he can really grab hold of, is the perfect Meathead. Not because he’s a meathead, that’s actually abundantly clear. But, rather, because he finds a way to tap into the naivete of the role without looking down on it. He then pairs it with a gruff manner (and brute strength), a young-seeming enthusiasm, intense loyalty and protective instincts and just a dash of comic ignorance (“never speak Spanish again!” he’s commanded). His Meathead can say some pretty backwards things and you still come away loving him, aware that he’s smarter than he seems, and convinced that he didn’t mean anything by the offense. Ketai rounds out the trio with a moving performance as the ranking member of the unit. Bringing an understated authority to the part, his soldier quickly became an audience favourite, spouting sharp one-liners and spinning stories, keeping the tone light in his unit. A rare creature at home in a place he doesn’t want to be, the grounded character demands a tricky balance of playfulness and solemnity, a balance Ketai strikes perfectly.

The whole piece is quite remarkable. I saw it in a tech rehearsal form- informal and somewhat incomplete- and it still took my breath away. If ever Fallujah comes to a venue near you, see it. 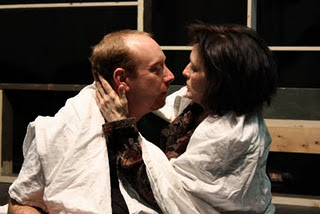 The next night, I was somewhat nervous about what I would think of Walking the Volcano. The playwright Jon Lipsky had very recently passed away and I’d been disappointed in the last work of his that I saw (The Actors’ Shakespeare Project’s Living in Exile). But when I exited the Playwright’s Theatre after Walking the Volcano I found myself quite relieved to have enjoyed the production as much as I did. A significantly more dynamic script than Living in Exile, Walking the Volcano is a series of 8 vignettes performed by 4 actors. Director Elaine Vaan Hogue gave the individual stories as sense of unity by establishing subtle offstage relationships for the actors to play with during the absurdly long transitions between scenes, though the transitions proved too long with or without the added interactions. 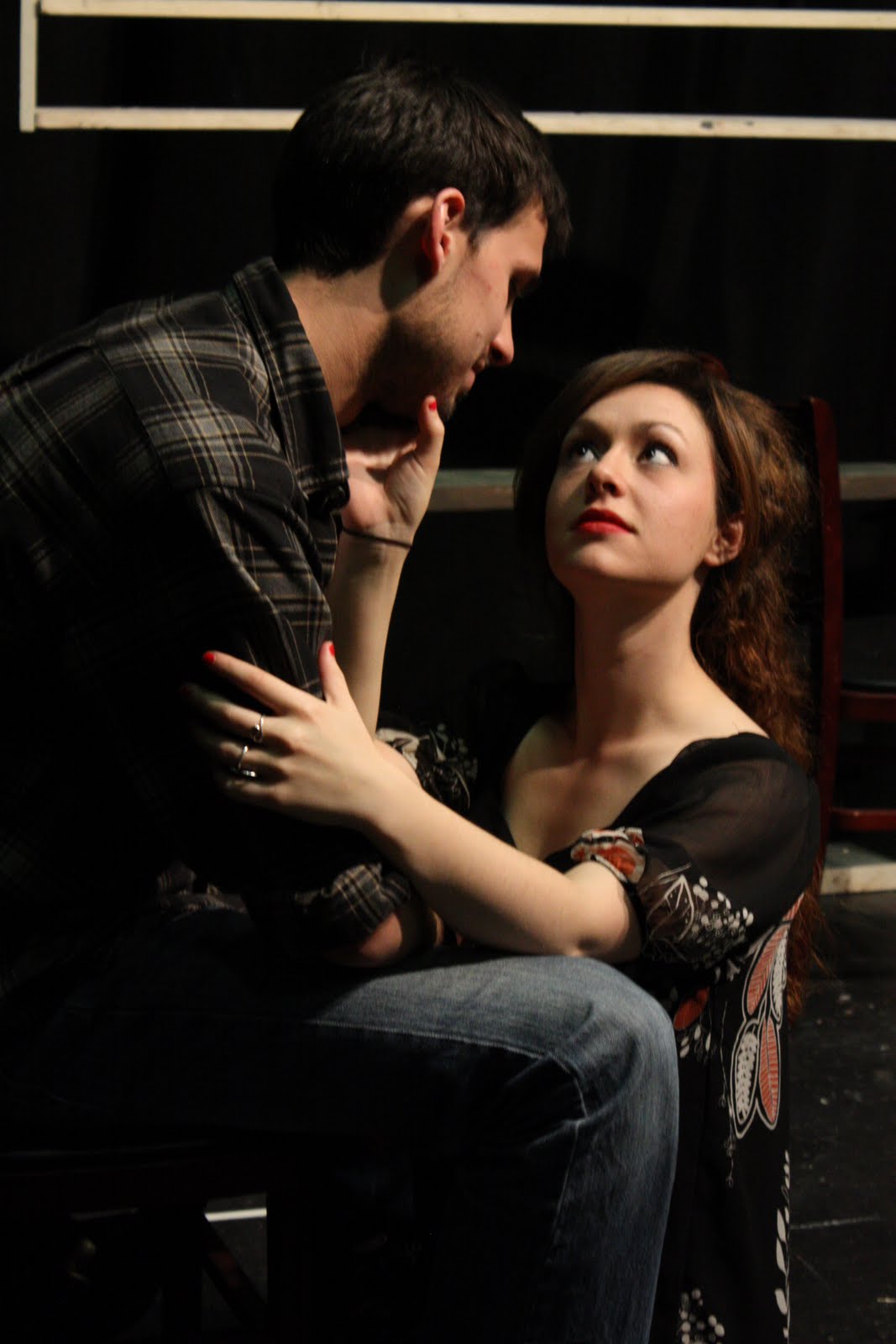 The cast, comprised of two CFA students and two established actors, proved mostly excellent. Paula Langton and Gabriel Kuttner were predictably good in the older roles. Kuttner, armed with a beautifully flawed charm, moved seamlessly between accents and played an enthralling mix of characters each as subtly detailed as the last. Langton was differently excellent with a showier tour-de-force series of performances beginning as an immature middle-aged narcissist and ending as a devastatingly evasive cancer patient. That last scene proved an emotional killer, bringing me easily to tears.

The younger cast members held their own decently opposite the vets. Brian Vaughn was eerily engaging as a series of substance abusers with violent tendencies (to put it simply), his charm making it easier to forgive the female characters for returning time after time. He consistently attacked his scenes with gigantic energy, sometimes to great effect and sometimes to an overwhelming one, but engaged his scene partner wonderfully and pulled the audience in alongside them. The final cast member, Jess Moss, inspired mixed emotions. Less engaging than her male counterpart but more adaptive, she moved easily between her contrasting roles but was never entirely effective in any of them. Vocal ticks limiting a convincing physical performance, the talented Moss proved the weakest member of a remarkably strong team. 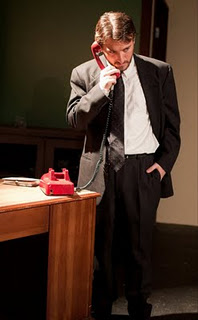 Finally, that same night, I had the pleasure of attending the midnight show of Wandering Minds’ Dial M for Murder. Far from a perfect production, Dial M greatly exceeded my expectations. Easily the best thing I’ve ever seen from Wandering Minds, Dial M was well-paced, decently cast and altogether effectively executed. Director Matt Hajek, an experienced carpenter and techie, designed an elaborate but effective set for the tech-heavy company to execute (which they did, beautifully) and his direction proved succinct and clever, utilizing the company’s strengths very efficiently.

The cast was comprised of the best talent in Wandering Minds. Phil Silberman took on the tricky role of Tony and fared quite well (though he is always at his best when displaying the comic skills he had to suppress for this role). Maggie Scull proved a wonderfully skittish Margot and Liam Wang a charming Max (though it would have served the play well had her chemistry been stronger with Wang less palpable with Silberman- but there’s little to be done about that). Wandering Minds president Travis Holloway earned great applause as Detective Hubbard in his final role at BU, tapping into his inherent trust-worthiness to catch the bad guy (hint: it’s Phil) and Liz Jerome gave her best BU performance yet as the cagey “victim” CA Lesgate.

Overall, Hajek found a way to highlight the strengths of the Wandering Minds company and put on their best show in years and a wonderful cap to an excellent weekend of BU theatre.

5 Responses to A Superb Weekend of BU Theatre