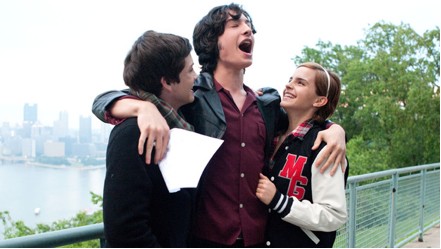 This is a hard thing to do at the end of every year. Take all the movies you’ve seen and break it down to your favourite ten of the year. It’s not as easy as it looks. Over the last fifty two weeks, I’ve watched over seventy movies and that was a hard list to narrow down to ten selections. I wrote this list out several times until I came up with one that I was confident in and ready to submit.

I am sure there are a lot of people who will scream from the roof tops when they find out what movies didn’t make the cut for my list this year, but this is just one writer’s opinion. These are not only my opinion of what I thought were the best movies of the year, but are the movies I had the most fun watching and I could sit down and watch these movies over and over again and enjoy them just as much as I did the first time I watched them.

So without further delay, here are my picks for the top ten movies of 2012:

10. Looper
By far the best Sci-fi film of 2012, Looper takes place 30 years into the future when time travel is used as a means of disposing bodies that are almost impossible to get rid of in the future. Organized crime syndicates send victims back in time where they’re shot and disposed of by agents in the past known as Loopers. Joseph Gordon-Levitt plays a Looper who had problems killing his last contract: his future self. Bruce Willis plays Levitt in 30 years which introduced some messed up travel paradoxes. With an original premise and some great direction, Looper was one of the best action movies of the year.

9.  The Avengers
This movie was the most fun I had in a theatre all year. Everyone had high expectations walking into this film and I can only speak for myself but Joss Whedon and Marvel/Disney exceeded them and then some. For a movie that featured at least four heroes from different film franchises coming together for one epic movie was something that many comic fans thought would be impossible to achieve. Not only did Whedon make a magnificent movie, but by choosing a villain we were already familiar with (Loki from Thor) it allowed us to concentrate more on the character development of our heroes and their dysfunctional relationship with one another. By far the best comic book movie of the year and while I’m sure I’ll get a few angry notes about that statement … I stand by it.

8. Flight
All I knew walking into this movie was there was a spectacular plane crash. That part was true: this film has an airline crash that doesn’t disappoint and was mind blowing to check out on the big screen. What came after was a stirring character piece about addiction and substance abuse. Denzel Washington puts in nothing short of an Oscar worthy performance as a airline pilot who gets in trouble for being noticed. By saving the day, he exposes himself to the spotlight and it tears him apart as his alcoholism and past ruin his career and threaten to land him in jail. The first non-animated movie directed by Academy Award winning director Robert Zemekis since Cast Away, it’s in my opinion one of his best motion pictures to date.

7. Seven Psychopaths
Director Martin McDonagh won my heart when he made a great movie a few years back titled In Bruges. That movie also starred Colin Farrell, which was why this movie was on my must see list for 2012. This movie was zany right from the start and is sure to be another McDonagh cult favourite. Basically this movie is about a struggling screenwriter (Farrell) who when trying to write his own film about psychopaths ends up getting caught up in a mess of violent elements who are chasing him and his friends for the stupidest of reasons. This leads the film to be very comical despite its apparent violent nature. Sam Rockwell plays Farrell’s friend who pretty much gets everyone into this mess and Christopher Walken more then impresses in his role as Rockwell’s counterpart in their ‘scheme’ that gets them into trouble. This movie was a lot of fun, which is what movie going is all about…

6. Skyfall
Sam Mendes directs the latest Bond film starring Daniel Craig as Agent 007, and the result is one of the best films in the franchise’s 50 year history. The story is gripping and comes together nicely and the action is well done as the shaky cam from the previous film was tossed away. The cast is exceptional, especially Javier Bardem who portrays one of the most menacing villains we’ve seen Bond clash with so far. There is a scene where the villain tries to intimidate 007 with some homosexual innuendo, one that is both shocking and funny at the same time. Skyfall comes full circle for its principal character. In Casino Royale, Bond was a young man just getting his feet wet in the field. In Skyfall Bond is getting older and not the young, reckless agent that he used to be. He’s both physically and emotionally vulnerable as the many years in the field have finally been taking their toll. It’s this deep storyline that makes the film a powerful treat, one that leaves us wanting more Bond when it’s all said and done. Hopefully we won’t wait too long to see Agent 007 return to duty once again.

5. Lincoln
The first five minutes of Lincoln try to shock you with the brutality that was the Civil War. Images of people being drowned on the battlefield, hundred of limbs being tossed into a hole behind a hospital after they’re amputated from wounded solders is the sight Spielberg wants us to see- a trick that worked well with Saving Private Ryan. But Lincoln’s best parts are the politics of bringing forth the 13th amendment, the very same that abolished slavery from the United States. It was a gripping story of how even back them, both sides fought for votes no less than they do today in Congress. By far the weight of this film is carried by Daniel Day-Lewis in what I believe was the single best performance of the year. His portrayal of Abraham Lincoln was stunning, and will no doubt land him his third Academy Award for Best Actor. Tommy Lee Jones, David Strathairn and James Spader are just a splinter of what is an enormous and impressive ensemble cast that made this one of Spielberg’s most gripping dramatic films ever.

4. Argo
Ben Affleck directed and starred in this movie concerning the hostage crisis that occurred in Iran during the Carter Administration. The CIA had learned that a handful of people from the embassy were hiding at the home of the Canadian Ambassador, and they had only a few months to figure out a way to get them out of the country. The CIA and the Canadians worked out a plan where they would fake the scouting of a movie and use that cover to smuggle the workers out of Iran as Canadians trying to make a movie for Hollywood. Based on the true story- though it’s still unknown how involved the CIA really was-, Argo was still a suspenseful movie that kept everyone on the edge of their seat. Ben Affleck’s best film to date, which is saying something because the other two films he directed (The Town, Gone Baby Gone) were both also very good. I really hope Ben keeps directing because he is really good at it.

3. Moonrise Kingdom
Wes Anderson’s first live motion picture in a few years, Moonrise Kingdom is a funny and very sweet story about young love and the crazy things kids do for it. Moonrise Kingdom surrounds teenage lovebirds with a mix of outrageous oddball characters who turn a simple runaway into an exciting adventure. Playing these odd characters are great actors such as Edward Norton, Bruce Willis and Bill Murray. Co-written with Roman Coppola, Anderson’s film takes a back seat to style as the film oozes with ‘Norman Rockwell’ like Americana which amplifies the film’s satire. With bright costumes, great music and a setting that transports us to another time, this is a sweet movie that was a joy to watch. Jason Schwartzman also has the best Cameo in the film, period.

2. Django Unchained
I have yet to watch a Quentin Tarantino film that I didn’t like. Yet after watching Django Unchained, I left the theatre thinking three things:
1)   This may be the best Tarantino movie I’ve ever seen.
2)   Does anyone feel like getting some KFC for dinner?
3)   Spike Lee is an idiot to bash this film without seeing it first.
This movie while tackling the subject of slavery in pre-civil war America, pays a wonderful homage to the old spaghetti westerns while at the same time keeping us entertained with a twist on a classic story that gets to us all: the damsel in distress. On a quest to free his wife from the bondage of a slave plantation, Jamie Foxx plays Django, a freed slave that helps a bounty hunter for the winter in exchange for the German’s help to free his wife. Christoph Waltz plays that bounty hunter and easily becomes a character we love to stand behind, as he’s against slavery and is a moral person despite the fact that he’s a killer who brings in corpses of outlaws for money. With some gruesome violence, some wacky humour and Don Johnson doing his best impersonation of Colonel Sanders, Django Unchained is another gem from director Quentin Tarantino who even had an explosive cameo in the film himself. Definitely worth checking out if you are a fan of his previous works.

1. The Perks of Being a Wallflower
The Perks of Being a Wallflower was written and directed by Stephen Chbosky (adapted from his own novel) and is a coming of age story about a boy entering high school and eventually adulthood. High school was never easy for most people, and in this film Charlie (Logan Lerman) is no different. While putting up with bullying and the odd taunts in class, Charlie becomes friends with Patrick (Ezra Miller) and his stepsister Sam (Emma Watson) and things seem to get better for a while. But there are plenty of things left unsaid that creep back into the film, especially when Charlie thinks back on the last best friend he had, which was his deceased Aunt. This movie has been getting a lot of comparisons to the works of the late John Hughes, and after seeing the movie I can tell why. This film is heart warming and the characters are very relatable, much like the ones we saw in the Hughes classics. This was a remarkable film and by far the best of 2012.