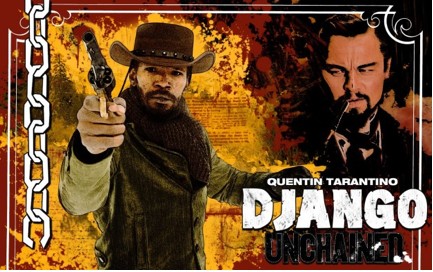 Just when we think we’ve seen the best from writer/director Quentin Tarantino, he comes out with another film that astounds us once again. Django Unchained, despite the idea that it’s a homage to classic ‘spaghetti westerns’ is a film that forces the audience to experience a multitude of emotions. Throughout the film we experience sadness, shame all the way over to happiness and even hilarity when the moment calls for it. While there are jokes made to lighten the mood, there are various moments when we are forced to look back at a chapter in history that isn’t exactly humanity’s finest hours. Tarantino doesn’t sugar coat a thing, exposing slavery for the ugly and very demented thing that it was. Some scenes are hard to get through but they are necessary so we can understand the plight of our hero. Each gut wrenching scene is a stark reminder of where Django Freeman came from and why he fights for the rescue his beloved wife from her oppressors and from the bondage of slavery. It’s a stunning film that is in this writer’s opinion one of Tarantino’s finest films to date. I thoroughly enjoyed watching it as it was hand down one of the best movies I’ve seen this year.

Carrying this film was the cast, a fine assembly of actors who brought this era to life for us in a way only Tarantino could. Jamie Foxx was a fine selection to play our hero Django (pronounced ‘Jango’ as the D is silent), Foxx’s finest performance since his Oscar winning role in Ray. This is a stark opposite of that stunning performance, as Django is a man who has been wronged and is full of rage. He has been a slave most of his life, separated from his wife for trying to run and meant to life out his days wondering where she is. We see very early in the film that Django has the potential to be great, but is hesitant to step up and take command of his new role in the world. Even when he is freed by Dr. King Shultz, it takes time for him to grow into and accept his new role as a free man and a bounty hunter.

In Dr. King Shultz, played brilliantly by Christoph Waltz, we are given a chance to root for a man who stands up for the side we want to root for. Shultz frees Djanjo in exchange in exchange for his help finding a bounty he is unable to identify. After completing the job, Dr. Shultz finds that Django would make a good partner as he has a knack for killing people, a proper way to vent out his anger for what has happened to him. It’s a partnership that defines the movie, and it’s Shultz’s compassion that leads the way for the films moral compass despite the fact that he’s a cold blooded bounty hunter who prefers to bring his men in dead rather than alive. It’s this duo that carries the film, giving us someone to root for as the film progresses. What I liked most is the fact that after playing so many villains in the few films we’ve seen him in so far, we are finally able to root for Waltz in the role of the man who is on the right side for a change. Christoph Waltz gives another award worthy performance as Dr. King Waltz presents every line and expression and finesse.

The rest of the cast is just as impressive. Some of the actors have hardly anything to say but their silence (and acceptance) of what is going on around is speaks volumes to the audience. Leonardo DiCaprio is a brutal and ignorant prick as Calvin Candie, the plantation owner. Samuel L. Jackson is stunning as his head manservant, who despite his ownership is very loyal to his master to the very end. We’re used to watching Mr. Jackson playing the tough man that’s always in your face. This time out, he practically steals every scene he’s in as a devious and very cunning old man that uses his wit and intelligence to service his master to the bitter end. Kerry Washington (from the TV show Scandal) did well with a very interesting role as Django’s wife. The scenes where she’s punished for trying to run away were some of the film’s most disturbing sights, a start reminder that even women of bondage were subject to the same brutality as the male slaves.

There are other standout performances that steal their respective scenes. I enjoyed watching Walton Goggins (from the show Justified) play one of Candie’s henchmen, and tarantino himself had a very explosive cameo as an Aussie of all things. Don Johnson also had a very interesting presence in a role that made me want to go out for fried chicken after the movie was done. Johnson’s scene with the lynch was hilarious, adding just the right humor to break the tension that we’d seen and were to experience later. I also want to make it perfectly clear that I didn’t miss the fact that James Remar (Harry Morgan from Dexter) had two different parts in this movie! While Remar’s second showing as Candie’s muscle didn’t have much to say, his brooding presence brought a lot of suspense to the film’s most intense moments.

Overall, ‘Django Unchained’ is brilliant film that will likely go down as one of Tarantino’s finest films. This movie worked for me a lot more than ‘Inglorious Basterds’ did. I liked that film, but I had a hard time getting into it and behind the characters who were indeed real bastards who did very bad things. In this movie it’s easier to rally behind these two men despite their profession because they are on a quest we can all understand, that being the damsel in distress. Their cause is worthy; to reunite two people who are bonded in marriage, which according to our heroes is stronger than the bondage of slavery. Tarantino had delivered a true western that is shocking, violent and at the same time gives the audience a lot to chew on when they leave the theatre. By far one of the best movies of 2012, hands down.