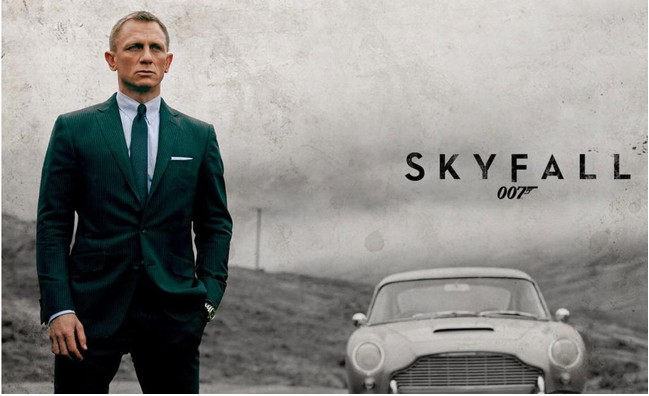 Bond Is Back: Skyfall Delivers

While I’ll be the first to admit that both Casino Royal and its ugly stepsister Quantum of Solace were not what I would consider the crème de la crème of the Bond franchise, I still found both films to be very enjoyable for one simple reason: Daniel Craig does good Bond. With his third swing at the plate, this latest version of Agent 007 has smashed the ball right out of the park. Not only is Skyfall by far the best Bond film of Craig’s series thus far but I will dare to even call it one of best Bond films ever. This film will win over stray fans that haven’t yet been won over by the Craig films. This is, without a doubt, one of the best films of 2012.

What I liked most about Skyfall‘s story was its loyalty to Bond films past while at the same time forcing the franchise to break new ground. The film is definitely far more focused than Quantum- which was all over the map and by the end turned into pure chaos. Writers John Logan, Robert Wade and Neal Purvis deserve acclaim for weaving together a story that works as they dig deep into Bond’s character (which is deeply flawed but fascinating to hang out with). Having a hero who is bulletproof and always manages to win gets boring after a while, but Bond is not a perfect hero. He doesn’t always win, but seems to bring his A game when it really counts. In Skyfall, Bond doesn’t win every battle, but instead focuses on the war instead.

Much of the credit for that has to be given to director Sam Mendes, whom we all know from his earlier works (films such as American Beauty and Road to Perdition, which also starred Daniel Craig) and in this film, Mendes delivers. Skyfall provides just enough action and story, pacing them both well to create a film that meets the needs of most fans who crave a strong story to go with their guns and explosions. Mendes’ work has always been rich in character and you can tell our director here gets Bond and what he truly stands for, despite what happens to him or what mistakes are made. When his homeland is under siege, 007 picks himself back up and returns to the game- a sound theme for a character who’s been on the silver screen for over fifty years.

The score by Thomas Newman (which I have been listening to for weeks actually) is deep and stirring and provides another layer of richness to the film and its characters alongside Adele’s powerful theme song (I’m shocked, by the way, that someone managed to create a song that works with that title).

Skyfall is also an ocular masterpiece. The great work of cinematographer Roger Deakin is truly remarkable and it’s hard not to stare with jaw dropped at some of the shots as we travel around the world with our favourite international spy.

While everything listed above is great, the cast is what really delivers here. With each film, Daniel Craig seems to get better and more in touch with the Bond I remember reading in the classic Ian Fleming novels. His performance provokes a lot of emotion out of the audience and we hang off of every line he says because of that, regardless if he’s staring down a villain or complimenting a bartender for properly shaking his martini. One thing I loved about Skyfall is the attention it pays to the film’s supporting characters. Dame Judi Dench delivers her best performance as M in her seventh film as Bond’s senior officer and Ben Whinshaw is a clever addition as the new Q, a fresh character that complements the changing times Bond has to adjust to. Then we come to the villain of the film (masterfully played by Javier Bardem) whose character is a reflection of what Bond could become if it wasn’t for his loyalty to country and to M. Bardem’s villain is witty and pretty much steals every scene he’s in. Thanks to this masterful actor, we truly believe our hero is in deep shit whenever the guy hits the scene.

Overall, Skyfall delivers. It’s the best Bond film starring Daniel Craig so far and will make for a very enjoyable movie going experience, especially for people who are already a fan of agent 007. Sam Mendes has created a bold and very thought provoking new chapter to what is already a solid franchise. If Skyfall is any indication of where things are going, I do look forward to watching more.

In the end, however, we are slapped between the eyes with a fact that even Bond himself cannot deny- he’s getting older and one day his time will come.

We’ll try to enjoy each adventure while we all still have some time left.