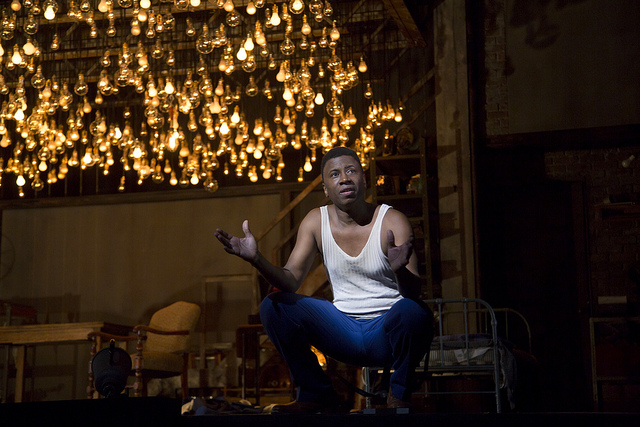 You could feel the hum of electricity in the theater, both in the metaphorical sense of the audience’s anticipation, and in the literal sense of thousands of light bulbs dangling brightly in front of your eyes. When the iconic ceiling of lights first came alive you could feel the electrical buzz, and there was a communal intake of breath at the spectacle. This was the general feeling at The Huntington Theater Company’s Invisible Man. Before I get into the details let me say, it is a masterful work and you should go see it; see it for the text, the tech, the acting – just see it.

I wasn’t overly familiar with Ralph Ellison’s novel before the show, so while the basic plot of the story was easy to follow, the narrator/protagonist’s vivid images at times escaped me. It was beautiful and moving, but there were moments I wished I could have the words in front of me; I wanted to roll them around in my head to get the full extent of what this brilliant and complex narrator wanted to tell me. But the show moved quickly, racing to get all the important beats of the novel into this small time frame. And while the actual plot of the novel is relatively short – or easily told, we experience it through the narrator’s retelling. His meandering train of thought between the present, the events of the plot, and his past experiences made the play a lot more rushed, or jumpy in its execution.

The set was an underground studio apartment, the home of the Invisible Man. This is where he lives unseen, where he steals light from white society, and where he listens to the blues. This is also the frame device for the story he tells us. The audience never really leaves the bright haven, although the wall of lights comes in and out as it pleases. Having other scenes play on top of the existing set is a great way to keep the frame device in the audience’s mind. A drive through the fields of a Black College, a paint factory, and a boxing match all happen around the apartment – making use of small movable pieces, or even rearranging the furniture. The sense of place is solidified through the use of three screens in the backdrop playing either stock footage of ‘a college’ or ‘a house’ or populating the landscape of the Invisible Man’s thoughts. While I loved the use of film to represent the less linear thoughts of a stream-of-consciousness novel, I found it less useful in the more straightforward scenes. If you say “gee isn’t this a lovely drive through the country” I don’t need pictures of fields to know where we are. It seemed to me they didn’t want the screens to be a one trick pony, so they went out of their way to find uses for them. But overall I think visual representation compliments the narrative on stage well in creating a comparable picture to the hyper-detailed world of a novel.

Of course, little could detract from the power of Teagle Bougere in the title role. It was no wonder I didn’t notice film playing, or care that the lights occasionally hurt my eyes – it was difficult to look at anything but him. Bougere and his co-stars took absolute command of the stage. I was happy to see Boston actor D’Lon Grant (of the Actors’ Shakespeare Project) as part of the mix as every single actor had a strong performance and there was no weak link – trust me, I love to spot them. The actors really put everything into the show, and the direction was tight and thoughtful. While I wish more Boston actors had been used, I can only admire the talent The Huntington has brought in for this production. It’s definitely one to remember.