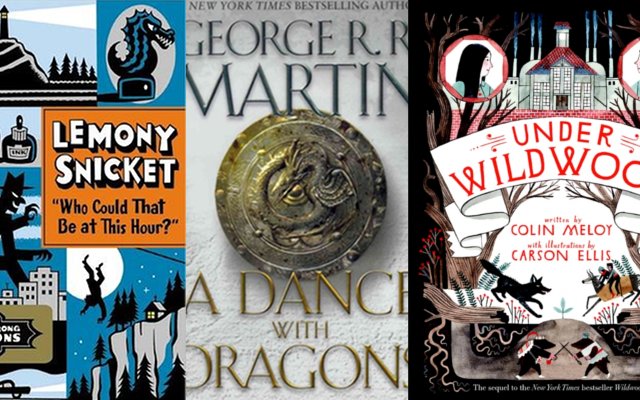 Generally speaking, I’m not very good at serials. I don’t watch TV when it airs (people watch things weekly?! How????), I always end up marathoning whole seasons in great swaths, or abandoning series partway through. For example, I have not finished either Battlestar Galactica OR Friday Night Lights yet. I love both of them, I’m just not great at big series commitments.

Why am I So Bad at Series? I think it’s because one installment of something bigger doesn’t feel like quite enough on it’s own, and then I get impatient that I can’t have the whole thing. But then, when I marathon, unless the series in question is utter perfection OR I’m laid up with some horrid disease for a long stretch of time, the Whole Series in one go often feels like too much. And I’m even worse with books than I am with TV. In the land of TV, you wait a week (usually) to get your next dose. With books you often wait multiple years (sometimes many more years than you were initially promised. THAT’S RIGHT MR. FFORDE. LOOKING AT YOU. EDDIE AND JANE. LET’S GO). Anyway, point is, I’m no great shakes at series. So for me to be really excited about them is notgonnalie kind of a big deal.

All The Wrong Questions, by Lemony Snicket
So I read the first of this series (Who Could That Be At This Hour?) earlier this year. And it was great—a word here meaning that if you like Lemony Snicket this book is great and that if you do not like Lemony Snicket you will not like this book. WCTBATH is chock full of Snicket-y neo-noir: tween detectives, duplicitous young girls, a Maltese SeahorseBeast (essentially), nosy reporters, and many many wrong questions. It’s really smart weird fun. The reason this book belongs here, though, is that I am specifically really excited to have all 4 planned books in the series out and available so that I can speed through them in rapid succession. Having read the first book (and thinking, “NO!!! Where’s the rest of it?! We’ve only just gotten started!”), four sounds like a pretty perfect amount. Less would be too little, certainly. Basically, my thoughts on this book are: you could definitely read it as a stand-alone. It will stand up and read well. But I want to wait until I can have all of them at my fingertips. You know, so I can know answer the right question: “What happens next?”

Wildwood Chronicles, by Colin Meloy
This is another kid’s series, but as you’ll know from my review, I loved the first book, and had wished for a sequel. And lo, the book gods heard, and delivered me a second book—Under Wildwood—with the promise of at least one more to come. This one’s here mostly because, come on, how often do the book gods actually hear/answer? Excitement abounds.

A Song of Ice And Fire by George RR Martin
Yes…. still. Even though we will be waiting years for the next one. I know, I’m soooo predictable. But—and I know other people have covered this series, so I promise not to beat the poor equine corpse too much—the world of the series is enormous, full of palace intrigue loosely based on the War of The Roses, stuffed with some of the very best female characters of fantasy literature ever, and has characters based on ALL OF MY FAVORITE ARCHETYPES. Stoic sailors? You bet ya. Disgraced-yet-honorable cops—I mean, knights? The place is crawling. Warrior-women? Yup. Unhomed people with father issues? OH, YOU MEAN EVERYONE EVER. I’m going to stop now. So the series certainly has some issues, and we will be waiting for … a while, to say the least, but I can’t wait for the next installment. (And, okay, yes, A Dance With Dragons came out in 2011, but we are talking about a series that has spanned literal DECADES. Exceptions can be made).