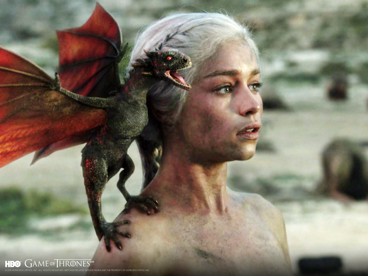 A Dance with Dragons, Interrupted

Rachael, you say, after post after post in breathless anticipation of A Dance With Dragons, how is it possible that you’ve yet to say anything about the latest in George R. R. Martin’s saga?

Well, hypothetical internet reader, I am ashamed to report that my radio silence comes from a rather pathetic place: I haven’t finished it yet. I was the girl who prided herself on finishing Harry Potter first in a house full of speed readers. And yet now here I sit, almost two weeks out from the release of A Dance With Dragons, and I’m on page 370?

I’m not sure what’s going on here, and it’s too early to declare anything definitive about the book, but the beginning has certainly been a struggle for me. I, unlike a lot of Song of Ice and Fire fandom, actually liked A Feast For Crows, and I’ve missed the presence of Brienne, Sansa, Arya, and Jamie acutely for this book. And although it’s exciting to have Danaerys and Tyrion back, I’ve yet to really latch on to either of their storylines. The tale of Danaerys attempting to tame the slave holders of Merreen hasn’t really gripped me, and can’t fail to feel like its treading water until she hits the real action. Danaerys, I’ve got to assume, is coming to Westeros sooner or later, and I’m hoping she heads in on the sooner side. And Tyrion. In the last twenty pages or so, he’s starting to get his spark back, but I want him less “captive” and more “captivating.”

I’m pretty sure I’m going to look back on this early hurdle as completely necessary ground work being laid for an amazing conclusion. I’m sure the heart aches and the shocks that the flesh is heir to are coming up, and I’ll get more than just creepy sex scenes between nose-less Tyrion and terrified prostitutes. But in the meanwhile, here’s hoping we find out “where the whores go” and how these disparate storylines come together soon.

*Side note: I sort of love the creepy Theon Greyjoy storyline, mainly because it’s the only one that has a whole lot of momentum right now, but could do with never having to read another rape-fantasy Asha chapter again.