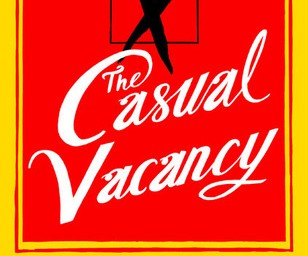 Being a 20something human with an intact soul and a love for the idea of children reading, it pretty much goes without saying that I love Harry Potter. I don’t love it as much as other people I know–I can’t name all the minor characters, nor can I recite any of the Sorting Hat songs–but I do love it, and have gotten much more fond of it in my old age. And yes, inevitably, Harry Potter will come up in my discussion of The Casual Vacancy.

Sorry Jo, but it is relevant and has a lot to do with my feelings.

Random Note: It was really odd to read Jo writing the word “erection.” It was just odd.

Anyway, onto real things. The Casual Vacancy is the story of one man’s death in the small town of Pagford and the ensuing ripples. Barry Fairbrother, a jolly, smart, personable, passionate, and well-liked man, dies suddenly on his way out to dinner with his wife. Barry Fairbrother’s death creates a casual vacancy on the town’s parish board, political strife, and quite a bit of personal chaos in the carefully contained dramatic lives of the people of Pagford—especially where it concerns the adjacent dilapidated Fields. And when The_Ghost_of_Barry_Fairbrother starts posting on the parish council’s website, things get really weird. The Casual Vacancy is an impassioned plea for empathy and social justice in the Dickensian tradition, but it is also the story of the town of Pagford.

I love stories about towns. We, The Drowned? Love it. A Rose For Emily? Love it. The really boring bits of a Hugo novel in between the parts of the real novel? …even I cannot. But you get it–I love the idea of the town as a prominent force or character in the story. But I did not love The Casual Vacancy.

I didn’t hate it. I just felt that it was often overdramatic, sensationalist, and that all it’s most “shocking” moments had been undercut by Skins, Law&Order, and the like (don’t worry, nobody gets forcibly sodomized or anything). The Casual Vacancy is an ensemble story with threads of casual domestic violence, verbal abuse, neglect, deviancy of all sorts, and a lot of care given to cataloguing the ways that people hurt each other. I accept that these things are a realistic part of many people’s lives—but the gross menagerie itself doesn’t really constitute a compelling story.

Another issue I had with the book was that I sometimes felt it was a message with a story, as opposed to a story with a message. The Casual Vacancy focuses a lot on class distinctions—the way that socioeconomic backgrounds drive opportunities and empowerment (or disenfranchisement). The central conflict in this arena is over the fate of “The Fields,” a poor area under Pagford’s purview. Some on the parish council want to jettison the Fields and others want to support the activities of the rehabilitation clinic and other support systems there. The story is pretty predictable, and felt more like a thinly veiled parable than a story for its own sake. Theoretically, I can get behind art as instructive (and I am all for social justice), but in reality, I prefer my art less blatantly educational. I want more story than message.

Other than that, it was … Fine. It was largely fine. There was one character I actually cared about–everyone else was interesting in different ways, but they didn’t grab me–and the writing couldn’t do anything to especially drive me. It’s hard to say this–because I so want to love this book–but The Casual Vacancy is mediocre.

Here’s where Harry Potter comes in.

And while the two are different in the obvious ways, for me, the biggest difference between the HP and The Casual Vacancy is the world building. You know I love some world-building. And man, can Jo build a world. From the food to the various aspects of government to books, fables, and other cultural references, the wizarding world is so richly detailed that it’s easy to imagine and fun to get lost in.

Naturally, the world building in a fantasy novel is going to play a larger role and be and more attention-grabbing than the world-building in a realistic fiction novel. That makes sense.

It just feels like something of a loss to know that the architect can make gorgeous, soaring cathedrals, and then watch her make a bus station instead (I prefer cathedrals to practically everything). And without a stronger story line or truly exceptional writing, The Casual Vacancy is just left being… less.

Just so you know, I do realize that’s unfair to hold almost anything to the standard of Harry Potter (and especially not my absolute favorite part of Harry Potter)—even Jo herself.

And I am sure that as a writer she wants to redefine herself, to reach, to write new things. Lovely aspirations, all.

But I can’t help wishing that she’d built another cathedral.

To be clear, I don’t want another Harry Potter book. I don’t want a book about any of the characters from Harry Potter. Their story is complete. But I would love to see Jo write another world as deeply, richly, and lovingly developed as the world of Hogwarts, The Ministry, The Quidditch Cup, and Privet Drive—because we know it’s wonderful when she does.