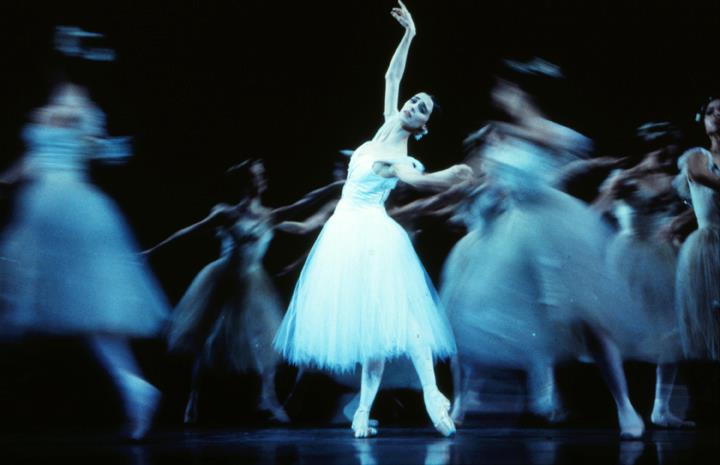 When they say Giselle is “the ballerina’s Hamlet”, there are lots of reasons that’s true (it’s a challenging, possibly infuriating title role that’s as self indulgent as it is beautiful) but part of it’s got to be the simple fact of name recognition. Other than roles made famous by another medium (Sleeping Beauty, Juliet, Carmen, etc) I can’t think of a prima ballerina character as famous as Giselle, at least in name. And, like Hamlet, far more people know the character’s name than what she does or who she is.  I certainly was one of those people. Coming to the world-famous ballet not quite sure why it was so famous, my experience at opening night of the National Ballet’s obscenely short-lived Giselle was a roller coaster of amazement.

I started out with ho-hum feelings as the ballet’s uninspiring first act rolled along. Guillaume Cote is always a dashing leading man but I wasn’t feeling much beyond basic charm from his Albrecht. I was similarly apathetic to Greta Hodgkinson’s technically perfect but magic-less Giselle. I’d never seen this particular pair together before and I found them a bit mismatched as they tried to sell act one’s strained love story. I didn’t really buy Piotr Stanczyk’s Hilarion either, I think mostly because neither the choreo nor this particular staging gave the character enough to do beyond facilitate Giselle going inexplicably mad and killing herself over the tiny insignificant detail of her peasant lover (Albrecht) really being a Count. The only thing I loved about act one was the pieces danced by Giselle’s friends, largely unconnected to the story. I generally don’t like large sections of dance that serve mostly as pretty distractions and don’t move the story along, but as danced by Elena Lobsanova, Chelsy Meiss, Patrick Lavoie and, the standout, Keiichi Hirano, they stole the act. By intermission, the main character was dead and I couldn’t understand why an overly simple and incredibly rushed pastoral lovers tragedy had spent 150 years on the “ballerina’s Hamlet” pedestal.

I’ve been starring at my keyboard for quite some time now, trying to think of the right way to say what I want to say about act two of Giselle, but I’m drawing a blank. I literally don’t have the words to tell you how transformative a 47 minutes it was. The act began with a singular ballerina- tall, thin, dark-haired and pale, clad all in white- upstage left. Plot-ignorant as I was, at first I thought it must be the ghost of Giselle, but as the dancer began a sweeping, diagonal pas de bourrée suivi towards downstage right I was flabbergasted at her transformation. There was a magical quality to her now, at once floating and deliberate. Then I looked more closely and realized that this was an entirely different character- Heather Ogden as Myrtha, Queen of the Wilis. With her blond hair died dark, Ogden could easily have been mistaken for almost any of the other principal female dancers at the National Ballet, if it weren’t for the magic that makes her, specifically, so much more than her technique. That quality made Ogden perfect for Myrtha, even if it is the smaller role. The magic and command of the stage she brought to her solo at the top of the act set up the second half of Giselle to lap the first ten times over.*

But even after Ogden swept to the side of the stage to supervise as her chorus of Wilis tormented first Hilarion then Albrecht, that ethereal and mesmerizing quality stayed on stage. The silly girl having died before intermission, Giselle was now mature and poised, and Hodgkinson danced her as such with all the expression and exquisite dazzle I was missing in the first half. Cote, too, stepped up his game as Albrecht transitioned from cagey lover to heartbroken and guilt-ridden mourner and victim of the Wilis’ torment. Their grand pas was breathtaking and I suddenly loved a partnership I’d severely doubted one mere hour earlier. The romantic costumes, designed by the legendary Desmond Heeley, donned by all the spirits flowed gloriously, especially on the corps de ballet as they executed some of the most challenging and beautiful corps work I’ve ever seen. Being a narrative lover, I’ve always fallen hard for the National’s principals, only noticing the corps if they were somehow out of step, but I simply couldn’t believe their work in the second act of Giselle– it’s beyond praise.

Coralli and Perrot’s choreography in act two is incomparable but even on a storytelling front it’s as though inspiration struck midway through the creation of Giselle. The story of redemption, regret and salvation is not only a Hamlet-like task dramatically, it is uniquely physical, expressed ideally through dance (something we learned last spring is not the case with Hamlet‘s story, despite the Herculean efforts of Cote in that title role). The second act of Giselle is a game-changer, not just capable of making-or-breaking a ballerina but capable of converting even the most cynical of audience members who think they’ve seen everything and felt all ballet could make them feel.

*I also can’t help but mention, on the subject of Ogden and her supporting role, the irresistible moment at curtain call when Cote took a rose from his own bouquet to give to his wife whom had just played the I’m-gonna-kill-you role and not the our-love-transcends-death role. Even when paired with other people, those two are just so lovely. On a related note, I would have been curious to see how the Hodgkinson- Etienne Lavigne marriage played onstage had their Giselle and Hilarion ever been paired; alas, maybe next time.