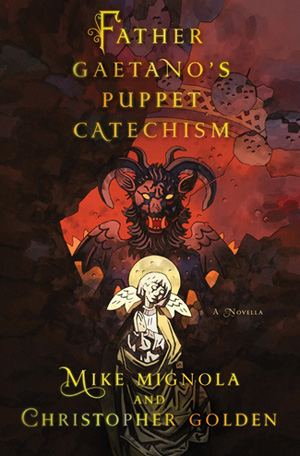 Father Gaetano’s Puppet Catechism is the latest effort from dark dream team Christopher Golden and Mike Mignola. It’s a little darker, a little more claustrophobic than their previous effort (Joe Golem And The Drowning City), and I had more mixed feelings about it. But if you can stand a little work, Father Gaetano’s grows into an intimate, intellectual, and spellbinding read.

Don’t let the title trick you into underestimating this book. Before I even opened the book, I thought I knew what it was about (Puppet Catchechism? Must mean Evil Priest and Evil Sentient/Possessed Puppets, obviously. Wrong). I was convinced I knew the story and wouldn’t like it. I was certain that I would be bored by a simplistic, tired story.

In the interest of full disclosure, for the first third of the book, I was a bit bored. There’s a lot of set up to go through before things get interesting. Golden and Mignola wrote Father Gaetano as a novella, but I think it would have been better as a short story or (ideally) a graphic novel. The backdrop–Sicily in the midst of WWII, a rectory repurposed as an orphanage for children unhomed by war–could have been rich and fascinating–an active player in the story–but instead seemed a limp sketch. A prop. And that loose, somewhat static backdrop could have worked, but we spent far too much time on it without learning anything new. So for the first third of the book I learned and relearned that orphans are sad, that orphans of war have crises of faith, that Father Gaetano is a well-intentioned man who perhaps should not have become a priest, and that Sebastiano loves his clown puppet that may or may not have a life of its own. The story is about guiltless people, and the inevitable forces that divorce them from innocence.

At any rate, push through that part, because when it gets going, we start to get into fascinating conversations about creation, personas, assigned/assumed roles, inherent traits, intention, and free will. I LOVE DIALECTICS. By the time I was about halfway through I was also all warmed up to Father Gaetano and some of the other major players. Interestingly, not Sebastiano–the orphan character we are most frequently told to watch–but Marcello, is may favorite. The core of the story–unfortunately pushed to the very last few pages–is wonderful. It’s subtler than I expected, beautiful in its balance of characters, and riveting.

When you get close to the end, tuck yourself into bed and read under the covers or with just a small light in the dark. It’s a shame that you’ll have to read the first third of the novella to get there, but trust me, if you like things that are creepy, richly dark, Poe-ish, or Miltonian, the end is worth it.