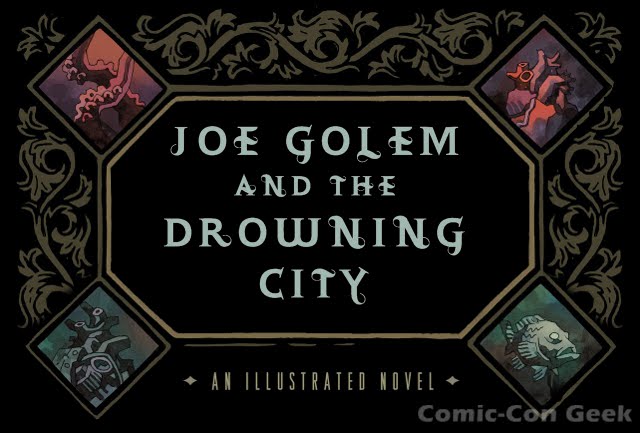 Joe Golem and The Drowning City

If the answer to most/all of these questions is “yes,” then this book is gonna be your jam.

If any/most of these things really annoy/bother you (maybe you’re deathly allergic to illustrations or something. I don’t know your life. I weep for your childhood, btw), don’t read this book, you probably won’t like it.

Joe Golem and The Drowning City is an illustrated novel co-authored by Mike Mignola (creator/artist behind the Hellboy series, among others) and Christopher Golden, and it’s got golems (you might have guessed), the occult (see previous), detectives, crazy people, fighting, and Cthulu (they don’t call it that… but that’s what it is).

And it’s pretty great. It’s not the best book I’ve read recently, but it’s quick, fun, engaging, and when it was over, I wanted a sequel (hallmark of success, yo).

In the book, the Downtown area of New York City suffered some earthquakes, subsequent tidal waves, and has been more than partially submerged for decades. That area’s now called the Drowning City. The story centers around a tough, scrappy, DrowningCity-born-and-bred 14-year-old girl named Molly McHugh and her friend/mentor/guardian, Felix Orlov. Felix is a retired magician, and sometimes medium, but one day a séance goes horribly awry (don’t they always?) and Felix is taken away by things in gas masks and yellow bio suits. While trying to figure out what these gas-men are/running for her life, Molly encounters Joe—the craggy-faced, heavy-hitting half of a detective duo—and starts trying to piece together how to save Felix (also, The World. But that comes later).

Joe Golem and The Drowning City is a fast, easy read. I started the book, and before I knew it, it was over. Like the action in the story, everything happens quickly—events are all, Bam!, Ka-Pow! Whoosh! (don’t worry, the book doesn’t actually use that kind of thing. Man, if only)—and it carries you along for the ride beautifully. The book draws on modern comic book sensibilities as well as hefty doses of neo-noir and horror. And the Drowning City feels appropriately decrepit and dangerous, moody and murky like a good ink wash—Golden does a great job of pairing his words with the tone of Mignola’s art (and it’s their second collaboration. Anyone else smell a dream team?).

Here is my chief complaint: The story’s not over. When I got to the end of the book, I expected (was hoping for) one of those sections that says, “A Preview for Molly McHugh and The Drowned City, the next book in the Joe Golem series” or something (I don’t know what they’d call the second book, but you get what I mean). But no. Just blank pages.

And that’s not to say that the story cuts off unexpectedly, or is unsatisfying, or something, but I just feel like there’s more there to explore that we haven’t really gotten to yet (and that I’d like to). Maybe the best way to think about my unfinished-feelings-issue is that this book felt like a great episode—but there’s still a whole season/mini-series worth of arcs and development and story left that didn’t fit into this one! Can I have that stuff too, please?

(And I mean, frankly, I’m glad that the authors didn’t try to fit all that stuff in this book—it might have smothered it—but I do want access to it.)

Hey! Mike and Chris, listen up:

Thing 1) Mike, I kowtow to your awesome art/innovation/storytelling prowess. You got style (and I hope you don’t mind me addressing you as Mike).

Thing 2) You both have me clamoring for more. Well done.

…Thing 3) You can start writing the second book now, kthnxbai.