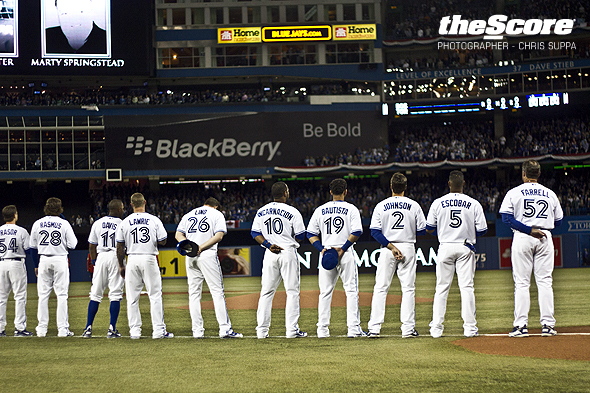 In parts 1 and 2 of this report card, the Blue Jays pitching woes were covered, and with them out of the way, it’s time to take a look at the other half of the diamond, and see how the Toronto lineup stacks up.

The Jays ended up in the middle of the pack offensively, with 716 runs scored over the course of the season, good for 14th in the Majors (and just two runs behind the World Series Champions, the San Francisco Giants).

So with that in mind, how does the team break down at each position?

J.P. Arencibia: B-
It’s likely that Arencibia has essentially peaked as a player, and as an average catcher overall. Despite a season slightly shortened by injury, he hit 18 home runs with a .233 average, but was hampered by a poor .275 OBP and a very high 29% K rate. Defensively, Arencibia made some improvements this year, and while he’ll never be an elite catcher, he’s serviceable as a regular starter. With Travis D’Arnaud waiting in the wings, though, it’s unclear how long he’ll hold on to that position.

Jeff Mathis: C+
Most backup catchers aren’t particularly known for their offensive prowess, and Mathis is no exception. He hit .218 for the season, with a less-than-impressive .249 OBP. However, Mathis is a solid defensive player, which makes up for what he lacks at the plate somewhat. It’s likely he’ll be back as the second-string catcher next season, regardless of who ends up winning the starting job in 2013.

Edwin Encarnacion: A+
It’s hard to describe Encarnacion’s 2012 season without resorting to superlatives. The 29-year old converted first baseman had a breakout year, smashing 42 home runs with 110 RBIs, far and away the best on the team. His .280 batting average and .941 OPS  also led the team, and with the majority of his starts in the field coming at first, the former third baseman has also improved his defensive game to a much more acceptable level. Having signed an extension midway through the year, the Jays will look to him to provide power alongside Jose Bautista in the middle of the order next year.

Adam Lind: D
Ever since his breakout season in 2009, Lind has struggled to recapture that magic at the plate, and 2012 was no different. After an abysmal start to the season, Lind was finally sent down to Triple A in June, and re-emerged in the big leagues towards the end of July. His numbers improved after the stint in the minors, but he struggled to hit home runs, a nearly essential part of the first base position. Ultimately, he finished near the bottom of the league in most offensive categories among first baseman, and his below-average defensive abilities don’t help his case, either.

David Cooper: B-
Cooper bounced around between Toronto and Triple A Los Vegas this season, but was able to do a solid job as an extra first baseman during Lind’s time in Los Vegas. He put up a .300 average in 45 games, but had trouble drawing walks and posted an OBP of .324. He also wasn’t able to provide much power, hitting just four home runs in his time with the team. He’ll most likely end up being a replacement player in 2013.

Yan Gomes: C-
Gomes became the first Brazilian-born player to reach the Major Leagues, appearing in 43 games for the Blue Jays, with 20 at first. He also made starts at third, catcher, and left field. Gomes wasn’t able to do much at the plate, putting up an average of just .204 and and OBP of .264. His main value comes from his defensive versatility, and he could see action as a call-up for injured players next season.

Kelly Johnson: D+
Johnson came to Toronto last season in exchange for fellow second-baseman Aaron Hill, in hopes that the move would rejuvenate both players. While Hill had an excellent season in Arizona, Johnson struggled for most of the year in Toronto, putting together a .225 average and an OPS of just .678. He did bring some solid defensive play to the field throughout the season, but unfortunately, it was nothing spectacular enough to outweigh a poor offensive showing. A free agent, Johnson is not expected to return to Toronto next season.

Omar Vizquel: C
As hard as it is to admit, Omar Vizquel was hardly a great player in 2012. While he’s still an excellent infielder and played around the diamond this past season, it’s clear that he’s lost a step or two in the field, tempering every spectacular play with a loss in range. He was also never a truly elite hitter, and struggled at the plate this year, hitting just .235 and with only six extra base hits. It wasn’t exactly a glorious end for a player of Vizquel’s calibre, but at least it wasn’t an embarrassing one.

Brett Lawrie: B
While Lawrie didn’t exactly have the superstar season that many Jays fans were hoping for, he did have a solid sophomore season, batting .273 with a .729 OPS, and hitting 11 home runs, and also showed that he’s an excellent defensive third baseman. However, some disciplinary issues, such as the helmet-throwing incident and some poor baserunning decisions marred Lawrie’s season overall. Still, it’s reasonable to expect him to continue to improve as he matures, and he should be Toronto’s starting third baseman for a long time to come.

Yunel Escobar: C
Setting aside the embarrassing eyeblack incident from the end of the season, Escobar had a disappointing year. After hitting near .300 for most of 2011, Escobar struggled at the plate in 2012. Despite a respectable .253 batting average, Escobar’s walk rate declined by nearly half, and he did not hit for extra bases at the same clip. Defensively, he was solid, but occasional mental lapses seemed to hurt his game, an issue that has plagued him throughout his career. Recent rumours suggest the Jays are looking to trade him, meaning that Escobar may already have played his last game as a Blue Jay

Adeiny Hechavarria: C-
A much touted Cuban prospect, Hechavarria made his Major League debut in 2012. A natural shortstop, Hechavarria has the potential to be one of the best fielders at the position in baseball, but before he can earn a full-time starting job, he’ll have to work on his hitting. In 41 games, he had a decent .254 batting average, but abysmal strikeout and walk rates, at 23.4% and 2.3%, respectably. If he can develop more discipline at the plate, he could be Toronto’s shortstop of the future.

Jose Bautista: A-
After struggling through April, Bautista seemed to regain his old form in May and June, and began sending balls out of the park at a steady clip. Unfortunately, an injury just after the All-Star Break limited his season to 92 games, and taking away a major piece of the Toronto offence. In the games he was able to play, Bautista hit 27 home runs with a .241 average and an .885 OPS. Having undergone wrist surgery in early-September, Bautista is expected to make a full recovery and be ready for the start of the 2013 season.

Anthony Gose: C-
Another of Toronto’s best-known prospects, Gose also got his first taste of the majors in 2012. The speedy outfielder was decent in the field, but struggled at the plate, posting a batting average of .223, along with a terrible 31% strikeout rate. There is one potential positive, though, as Gose’s numbers improved significantly in September, striking out less with more at bats, and walking much more. If he can keep those numbers up, there might be a place for him on the 2013 roster.

Moises Sierra: C
Another call-up during the season, Sierra was not a particularly spectacular addition to the team. His season had a familiar refrain for Toronto rookies, a low average (.224) with a high strikeout rate (31.4%). Defensively, he was reasonably solid, though he often looked a little uncertain in the field, he usually made all the plays that he needed to. However, with better options available in the outfield, it’s tough to imagine Sierra seeing much time in the Majors next season,

Colby Rasmus: C+
Acquired from St. Louis last season after struggling there, Toronto hoped that Rasmus could turn things around and return to the early form he had with the Cardinals. And while he rediscovered his power stroke this season, matching his career high of 23 home runs, Rasmus wasn’t able to excel at the plate, batting just .223 for the season. Defensively, he was excellent, but aside from a hot June, his work at the plate leaves much to be desired. All the same, it’s likely he’ll be back in centre field next season.

Rajai Davis: C+
Davis’s saving grace is his speed, having stolen 46 bases this season. Otherwise, he is fairly light-hitting, and went through a number of stretches where he was largely ineffective at the plate, in spite of his .257 batting average. He’s also something of a defensive liability, as he often has poor reads on fly balls, making up for it somewhat with his speed. Overall, he’s probably not an ideal starting left fielder, but if the Jays chose to retain him in 2013, he could be a solid fourth outfielder.

B-
The Jays have some big holes in their lineup, particularly at first base, second base, and left field, but they still managed to hold their own offensively, even without Bautista. The team could definitely use some true top-of-the-order hitters and a little more balance overall, but the problems here are nowhere near as major as in the starting rotation. The addition of a decent left fielder and a second baseman, at least one of whom hits for a high average, would do a lot to solidify the lineup in 2013.