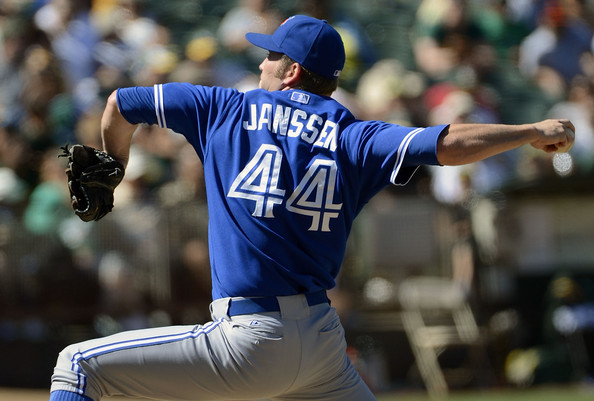 While it was a rough year for the Toronto Blue Jays starting pitchers (see part 1 of the report card), the bullpen fared somewhat better. After a rough start that saw highly touted new closer Sergio Santos lose his season due to an injury and veteran Francisco Cordero completely lose his edge, the Jays managed to quietly assemble a solid—if not spectacular—cast of relief pitchers in the second half of the season.

Before getting to the grades, a quick note: as the Jays used nearly thirty relievers over the course of the season, this article will only focus on players who are still with the team, and players who made a moderately significant contribution over the course of the season (somewhat arbitrarily defined as 15 or more innings pitched). Pitchers who received a grade in the starting pitcher rankings also do not appear.

Casey Janssen: A+
In the offseason, the  Jays acquired Santos from Chicago in a trade. While he was expected to be Toronto’s closer in the long-term, he struggled in April and eventually required season-ending shoulder surgery. Janssen took over the role from Francisco Cordero partway through the season, and ended up being a ninth inning anchor. He had 22 saves in 25 opportunities, struck out opposing batters at a steady clip, and maintained a sparkling 0.86 WHIP over the course of the season.

Darren Oliver: A+
At 41 and having played in parts of 19 different seasons, one could be forgiven for not expecting much from Oliver. However, the veteran reliever went on to have what was perhaps the best season of his career, with a team-best 2.06 ERA for the season, and a similarly excellent 1.02 WHIP. Oliver was a rock in the eighth inning, and could reliably be put into the game to protect a slim lead. While the Jays have an option to extend his contract for another year, Oliver has indicated that he may retire to spend time with his family (who live in Texas), so his future is currently up in the air.

Jason Frasor: C+
After being traded to Chicago partway through the 2011 season, Frasor was traded back to Toronto- where he has played almost all his career- in the offseason. While Frasor has never been a spectacular reliever, he’s generally been fairly reliable, though he took a bit of a step back this season. He posted a career-high WHIP of 1.47 and his ERA rose to 4.12, while giving up walks and home runs at a higher rate than in his last several seasons. Frasor may not have run out of gas yet, but he could end up on a short leash if the Jays retain him and his numbers continue to slide.

Luis Perez: B-
Early in the season, Perez was stellar, posting an ERA under 2.50 through April and May. However, his numbers fell off quite a bit in June and July, before an elbow injury ended his season just before the All-Star Break. His season ended with a 3.43 ERA and a 1.29 WHIP across 42 innings pitched, certainly respectable numbers for an undrafted player in his second full season in the Majors. Tommy John surgery will likely keep Perez out for most of 2013, but he could be a decent option to fill any gaps that arise in the bullpen towards the end of the season.

Aaron Loup: A
Loup has been one of the Jays’ pleasant late-season surprises in the bullpen. A ninth-round pick by Toronto in the 2009 draft, Loup spent his first few seasons languishing in rookie league and single A ball. However, he started 2012 with Double A New Hampshire and turned a corner, earning a call-up to the big club partway through the season. Loup posted a solid 2.64 ERA, along with a decent strikeout rate of 18% and an excellent walk rate of just 1.7%. Perhaps most impressively, he didn’t give up a single home run in 30.2 innings pitched. He’ll likely regress somewhat in a full season, but should play a role in the bullpen next year.

Steve Delabar: B+
Acquired from the Seattle Mariners in July for outfielder Eric Thames, Delabar was another solid midseason addition to the bullpen. He made news around the league in September for becoming the first pitcher in Major League history to strike out four batters in an extra inning, a feat that makes for something of a microcosm of his time in Toronto. He had an incredible 36.5% strikeout rate, along with a solid 3.38 ERA. His performance was dragged down somewhat by an excessive number of walks, but it seems likely that he will have a role to play in the bullpen next season as well.

Brad Lincoln: D+
Not all of the Blue Jays’ midseason changes to the bullpen were instant successes. Lincoln was brought over from Pittsburgh in exchange for Travis Snider, but struggled in Toronto. His ERA with the Jays was 5.65, compared to 2.73 with Pittsburgh, his WHIP climbed from 1.10 to 1.36, and his strikeout rate declined from 25.1% to 22.8%. That said, Lincoln still has potential to play a role; it’s possible he might begin 2013 in Triple A, and be an early call-up in case of an injury in the bullpen.

Brandon Lyon: A-
Lyon made his debut with the Jays way back in 2001, was traded in 2002, and has bounced around the league since then. He was traded back to Toronto from the Houston Astros in July, and put up some solid numbers in his two months back in a Blue Jays uniform, including a 2.88 ERA, a 1.12 WHIP, and a 26.9% strikeout rate. The 33 year-old’s future remains up in the air, however, as the three year, $15 million contract he signed with Houston has expired, and the Jays have yet to make any indication if they want to resign him.

Chad Jenkins \ Chad Beck: D-
Jenkins and Beck both split their time between the minors and the Blue Jays this season, and both got the majority of their Major League action in August and September. Neither pitcher posted spectacular numbers, with a 4.91 ERA for Jenkins and a 6.32 ERA for Beck. Both players are likely to spend most of their time in Triple A next season, barring a spectacular turnaround, and will likely only see Major League service in the event of injury.

Overall: C+
In spite of all the positive ratings here, the Toronto bullpen was only at its best in the second half of the season. The team spent far too long struggling to define roles, and its overall performance was hampered by several players, namely Cordero, Lincoln, Beck, and Jenkins. That said, there did seem to be a core of solid pitchers emerge after the All-Star Break, so with a little refinement, the Jays might find themselves with a solid bullpen in 2013.