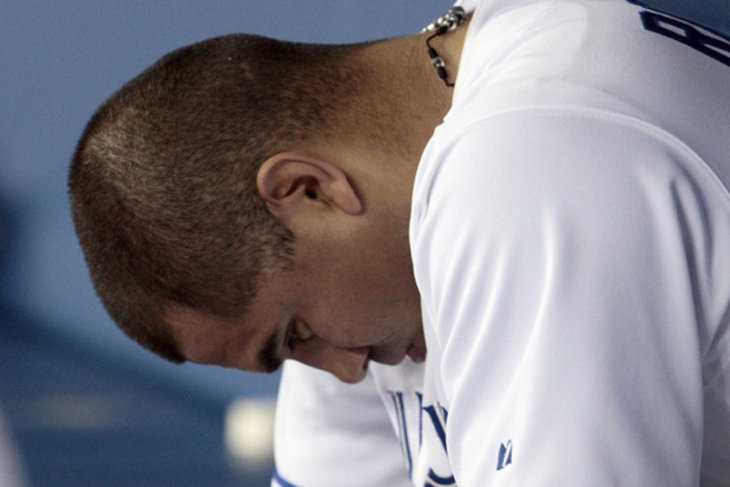 For Blue Jays fans, the 2012 season was one that started with high hopes, but ended in crushing disappointment. After having a stellar preseason and managing to stay in the wild card hunt up until the All-Star Break, the Jays fell apart in the latter half of the season, stumbling their way into a 73-89 record. A series of injuries and some disappointing under-performances from key players had a large role in their demise.

With that in mind, it’s time to take a look back on the season and which Blue Jays get a passing grade for their play, beginning  with the starting pitching.

Ricky Romero: F
It would be an understatement to say that the Jay’s supposed ace had a disappointing season. After a solid 2011, in which he put up a 15-11 record with a 2.92 ERA, Romero went 9-14 this year, with a staggering 5.77 ERA. His WHIP rose from 1.14 to 1.67, he walked 35 more batters while striking out 54 fewer, and pitched 44 fewer innings. It’s hard to say exactly what happened, but suffice to say that the Blue Jays will need Romero to rebound in 2013.

Brandon Morrow: A
Morrow was almost Romero’s opposite this year. Always considered a pitcher with high potential, Morrow has always struggled to put it all together. However Morrow managed to shine in 2012, putting together a 10-7 season, while leading the starting rotation with a 2.96 ERA. Unfortunately, a June injury sidelined Morrow for two months, preventing him from playing a full season. Some of his advanced stats, like a BABIP (Batting Average on Balls In Play) of .252 suggest he may regress a bit next season, but that doesn’t change the fact that he was easily Toronto’s best starter this year.

Henderson Alverez: D
Though Alvarez put up similar numbers to Romero (a 9-14 record with a 4.85 ERA) he gets a somewhat higher grade owing to having lower expectations. While he did lead the team in innings pitched, with 187, Alvarez suffered from being a contact pitcher who rarely strikes out opposing batters. His K\9 rate (strikeouts per nine innings) was 3.80, lowest among all Toronto pitchers. That said, Alvarez has very good stuff and is only 22, so if he can manage to add a strikeout pitch to his arsenal, he may yet have a future as a Major League starter.

J.A. Happ: B-
Acquired from the Astros in a midseason trade, Happ had a surprisingly good start as a Blue Jay. In six starts (with four relief appearances) before requiring season-ending foot surgery, he posted a 3-2 record with a 4.59 ERA. He also had a number of excellent peripheral numbers, including an impressive 10.53 K/9 rate, a team-low 0.54 HR/9 rate, and an excellent FIP (Fielder Independent Pitching, a measure of a pitcher’s expected ERA based upon league-average defence) of 2.70. He did only pitch 33 innings, though, so the big question is if Happ can carry his success as a Blue Jay across a full season.

Carlos Villenueva: C+
It’s hard to evaluate Villenueva’s season, as a terrible end casts a shadow over an otherwise strong season. After beginning the season in the bullpen and posting a 3.24 ERA across 33.1 innings pitched, Villenueva was promoted to the starting rotation to help fill in the gaps caused by injuries. In July and August, he had a solid 2.84 ERA, but ran out of gas in September, posting a staggering 8.10 ERA for the month. This lead to questions about his ability to pitch an entire season as a starter, including from General Manager Alex Anthopoulos, so it wouldn’t be surprising to see Villenueva test free agency in the offseason.

Drew Hutchison: B
Hutchinson made his Major League debut in late April at just 21 years old, and as you might expect from such an inexperienced pitcher, he struggled at first. However he seemed to steadily improve through May and into June, but suffered an injury just nine pitches into his 11th start, finishing his season with a 5-3 record and a 4.60 ERA. Having since undergone Tommy John surgery, it’s unlikely that Hutchinson will pitch much at the Major League level, if at all.

Brett Cecil: F
Cecil caught the attention of Jays fans in 2010, when he posted an impressive 15-7 with a 4.02 ERA. In the two seasons since, though, he hasn’t shown any ability to improve and was downright bad this year. Called up in mid-June to replace the injured Kyle Drabek, he went 2-4 with a 5.72 ERA in nine starts before being demoted back to Triple A. His 5.03 FIP indicates that Cecil likely doesn’t have much of a future with the Jays if the team wants to contend.

Aaron Laffey: D
Another pitcher called up in mid-June due to the raft of injuries at the time, Laffey did an adequate job as a replacement player. He went 4-6 with a 4.81 ERA, while his K/9 rate of 4.29 and FIP of 5.48 suggest that he does not have much of a future as a starter at the Major League level. It’s likely he’ll spend most of 2013 in the minors if the Jays make upgrades to their pitching staff in the offseason.

Kyle Drabek: D+
Acquired in 2009 from Philadelphia as part of the Roy Halladay deal, Drabek has yet to live up to his potential as the 18th overall pick in the 2006 draft. Before having his season ended in mid-June by the second Tommy John surgery of his career, he went 4-7 with a 4.67 ERA, despite being fairly lucky with a .269 BABIP. He didn’t show any significant improvement from his 2011 numbers, either, except for a bump in his ground ball percentage from 44% to 54%. At this point, it’s hard to see Drabek ever being anything more than a fifth starter or replacement player, barring any major changes he can bring to his game.

Overall: D+
Despite a few bright spots, such as the emergence of Brandon Morrow and some early promise from Drew Hutchinson, starting pitching was a major weakness for the Jays in 2011. Romero and Alvarez both had disappointing years, and the assortment of young players brought up to replace injured starters failed to dominate opposing batters. If the Jays are serious about competing in 2013, they’ll need to add at least a couple of veteran starters in the offseason, as well as hope for a rebound from Romero.

Next up: the bullpen.