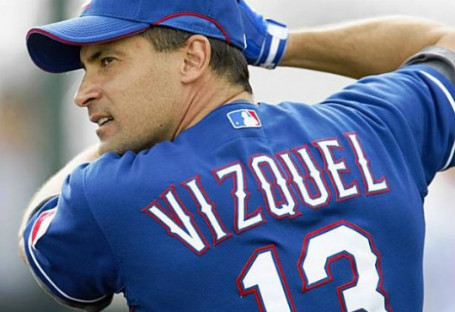 Omar Vizquel has barely taken the field in his one season with the Toronto Blue Jays, but at last night’s final game of the season, even the thousands of displaced hockey fans who had never heard of the man knew they were in the presence of a legend.

24 years in the major leagues, 11 gold gloves, #40 on the all-time hits list, all-time leader in double plays at SS, highest career fielding percentage for a shortstop, and a 3-time All Star player- Omar Vizquel is headed for Cooperstown one day. The 45-year-old Venezuelan started playing for the Seattle Mariners before I was born and, 6 teams later, I just saw him play the final game of his career at Toronto’s Rogers Centre in front of miserably small crowd of 20,000 and change. But we proved a lively 20,000 and change, cheering the Jays to a rare win at the end of a rough season and rushing to our feet no fewer than 5 times to applaud Vizquel.

In a show of great respect, fan-favourite third baseman Brett Lawrie donned a number 17 jersey instead of his usual 13, allowing the retiring shortstop to play his final game in the number he wore for most of his career. Vizquel came to bat 3 times in the 2-1 game against the Minnesota Twins (pitched expertly by the great Brandon Morrow) and went 1-3 at the plate with a single in the 7th. Though he’s been subbing around the infield all season and rarely replacing controversial shortstop Yunel Escobar, Vizquel took one last shot at the position that made him famous, turning a handful of double plays and making at least one spectacular catch.

Manager John Farrell sent utility man Mike McCoy in with 2 outs in the 9th, giving Vizquel his curtain call as he left the field to wild cheers and hugs of appreciation from his teammates. Reliever Brandon Lyon finished out the game and the congratulations lingered on the field a while longer than average as the fans and the Jays bid farewell to Omar and Omar Vizquel bid farewell to the game.

As we close out this horrible season full of injuries and embarrassment, it was nice to leave on a high note for a legendary player who not only showed us why he’s awesome but brought out what’s awesome in the young guys who are still working their way up. I’ll leave you with what catcher JP Arencibia tweeted after the game:

“It was an absolute honor (honour) playing in @VizquelOmar13 last game and I will remember that for the rest of my life! #HOF#1stClassMan”