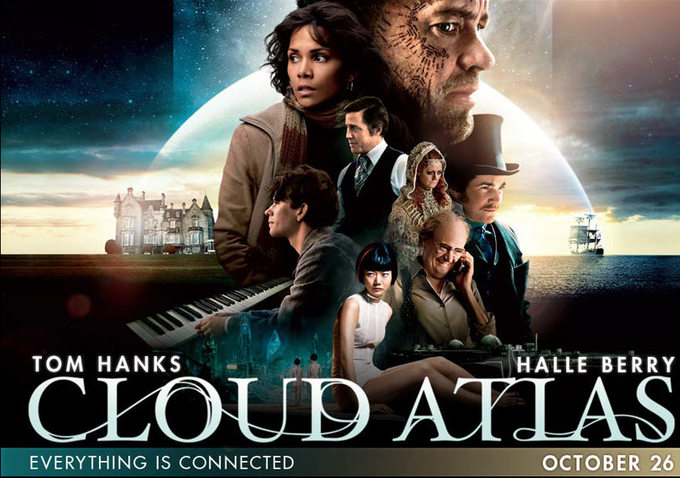 There’s an easy way and a hard to explain Cloud Atlas. The easy way: it simultaneously tells six linked stories taking place over the span of five hundred years. Individually these stories are (generally) easy to understand, and, just as importantly, easy to follow, as they weave in and out of one another. However, to use an English lit term, together these stories do not really make up a non-linear narrative, because there isn’t really a larger sequential story to unravel. Instead the movie relies on thematic links to make itself whole.

The harder way to explain Cloud Atlas is to talk of what the movie is about. And it certainly strives to be about something, as those six different stories are tied together through big, epic themes of freedom, struggle, and the value and power of the individual.

Before I embark on a long-winded paeon of praise about this movie, full disclosure. Personal Note one: I haven’t read the David Mitchell novel on which the movie is based, but I want to, because, Personal Note two: this kind of thing is right up my ally. I like a book so heavy I have to change purses just to carry it around, and thus, the scope of Cloud Atlas is made for me.

I almost always try to read the book first (as someone who recently gave away thousands of dollars to get a piece of paper proving this fact, I am required to state this) and the movie Cloud Atlas certainly made me want to read the source material. It’s a movie that’s hard to review, partially because I want to tell you, quite simply: ignore me, ignore everything I’ve said, and unpack and deliberate it yourself.

All that said, the movie is easy to recommend even if you’re not crazy like me, because despite its length (nearly three hours) and breadth, it never lags. The movie flashes between all six stories and their different tones and characters at lightning speed. At one point, for example, it cuts between a wacky car chase of elderly people to a dramatic and serious chase and shoot out, several unrelated decades previously, without ever losing your attention.

I mention not having read the source material, because, more than anything, Cloud Atlas ambitiously demonstrates how movies can tell this sort of epic story using the language of cinema. One of the most memorable elements of the movie is the fact that the stories are visually linked simply through the actors, as each actor plays multiple roles. Only in the end credits, through clips of every character each actor performed, do you realize how much you missed. The theatre I was in audibly “ooh”-ed during the credits for this reason, as the make up (mostly) successfully ages, disguises, or controversially, changes the race of several actors.

The thematic linking of events through human actions gets efficiently expressed through that multi-casting, especially through extremely recognizable actors like Tom Hanks and Halle Berry. It is an ensemble cast, and the acting is generally great. Hanks and Berry are the closest thing the movie has to main characters, and as such they appear in some form in each story. Hugh Grant and Hugo Weaving are the only others to appear in every storyline, as villains performed variously sinister, cruel or comic. Of the leads, Berry is far easier to believe in her two central roles; a 1970s whistle-blowing reporter and a post-apocalyptic explorer, trying to save the remains of the human race.

This leads me to my main problem with Cloud Atlas: you cannot extract Tom Hanks’ fame and ubiquity out of his acting any more. The movie is deeply immersive, but Tom Hanks being who he is takes you out of the experience. When he briefly shows up playing a ridiculous British gangster, the entire theatre laughed.

The characters of each story are connected to one another as the marginalised group of various eras – slaves, homosexuals, the elderly, clones – fighting to rise above their stations. I personally favoured ones using Hanks the least: Ben Wishaw as a gay composer in 1930s England, and the earlier of two dystopian futures, set in Korea and starring Doona Bae as a self-aware clone.

I have avoided detail as much as possible, because the bottom line is that while the specifics of each story are interesting and fun to watch, ultimately, it is the realization of the links that compose the movie that makes it so enjoyable.