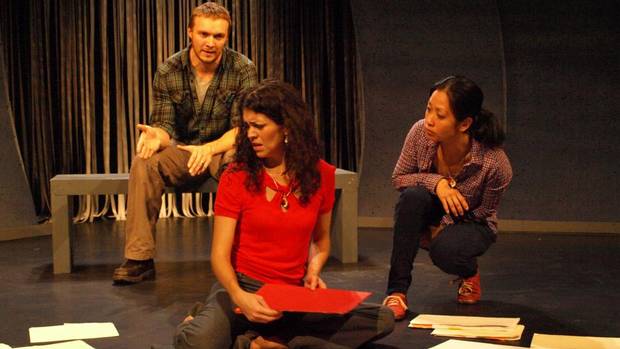 The Hours That Remain

On Dundas East, in Regent Park,  there is a fantastic new Toronto theatre. The Aki Studio Theatre in the beautiful Daniels Spectrum community centre is a truly great space: a big convertible black box that feels at once expansive and intimate- the perfect place to house Keith Barker’s new play that touches on how one family’s experience isn’t just their own. The Hours That Remain tells the story of Denise and her husband Daniel as they deal with the disappearance of Denise’s sister Michelle out on an expanse of highway in British Columbia tragically nicknamed “The Highway of Tears”. The site is notorious for (or, perhaps, criminal unknown despite) the disappearance of a startling number of Aboriginal women. The play- nor the director’s note, nor the playwright’s statement- doesn’t give many specifics, but we do get an emotional roadmap for how we should feel about that lack of specifics. The play follows Denise as she searches for and mourns her sister 5 years after Michelle’s disappearance, and along the way introduces us, through Denise’s “visions”, to a host of women with stories like Michelle’s on that same stretch of highway.

The play’s point is good, and David Storch’s direction is lovely (as is Andy Moro’s functionally beautiful set design and Samuel Shouldice’s evocative sound design), but I feel as though the play itself doesn’t entirely make its good point. I’m always intrigued when a playwright decides to take on an issue because they feel it is being largely overlooked, and I appreciate Barker’s universal-via-personal approach, but by the end of the hour-long play I didn’t know significantly more about the issue than I did at the beginning. I cared more about the fact that I didn’t know more, but I wasn’t armed with the knowledge or ability to do anything about it. It’s as if the play is a call to arms in a war where the enemy is still elusive. I don’t disapprove of nagging ambiguity as a fascinating emotional response, and I certainly wouldn’t suggest that the play be turned into a factual lecture on the issue, I just wish there was more of a conclusion to draw. Perhaps its because the disappearances are still a mystery even to those already aware and involved in trying to stop them, but I came away feeling guilty and concerned but with no course of action to correct that; the world is not a better place because I now know about one of its sadder realities. There are larger statements that could have been made about how modern Canadian culture overlooks aboriginals or how systematic segregation between European descendants and First Nations is ultimately less helpful to both parties (an interesting question for a Métis playwright, specifically, to address) but those do not appear to be Barker’s themes. He wants to point out an issue and tell a very sad story about it- which,  don’t get me wrong,  he does effectively- but once it’s been pointed out, something more needs to be said about the issue.

Saskatchewan Native Theatre Company and New Harlem Productions have assembled a pretty good cast to carry the point-making, including one of my current Toronto favourites Eli Ham as Denise’s patient and loving husband. Last time I saw Ham it was his frantic, macho Macbeth, so to see him play a role with such soft-spoken kindess is a fascinating shift, but he pulls it off beautifully, pulling me easily in to his concern for his wife. Tara Beagan plays Denise with unsettled longing, a choice that speaks volumes about the character’s state of mind and, as the cleverly executed trick in the play’s structure reveals, state of being. Keira Loughran has the most challenging task, playing a host of characters who are all simultaneously different yet the same, as though the victims of The Highway of Tears are linked through her. The result is some understandable cartoonishness, though she pulls it out when needed for key moments like a tense tight-spot-lit monologue from the point of view of a woman dying in the grass by the side of the road.

The acting and production quality of The Hours That Remain does the subject matter justice but outweighs the play’s unfinished conclusions. Barker offers up a script with excellent structure, sound inspiration, and a few standout moments such as the quietly sad ending that so perfectly spotlight’s Ham’s ability to share his despair with an audience. But the play needs an epilogue,  something that tells us where to go from here now that our eyes are finally open.