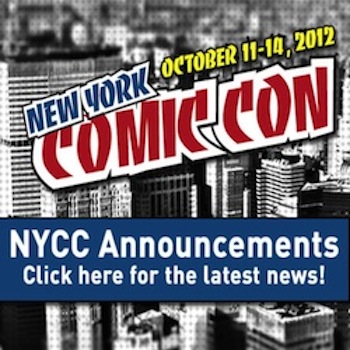 I’ve touched on this a little before, but it bears repeating. While historically, Comic Cons were mainly a method for learning more about the comic book industry and acquiring rare or vintage editions of things, recently they’ve become more of a vehicle for publicity—particularly sneak peeks at things and grand unveilings.

Here’s a little bit of what we learned at NYCC.

In terms of the big two comic book publishers (DC and Marvel), they’ve both had pretty big years. DC’s just wrapped up its first year of The New 52, and is gearing up for more books in the Before Watchmen series, while Marvel’s riding the wave of Avengers success.

DC has been doing some crazy stuff in the past year. If you’re not familiar with it, The New 52 is a re-vamp and re-introduction of The DC Universe and its major players. Last September we had all new introductions to our favorite superheroes from brand new issue 1s. And a lot has happened since then.

-For example, Superman and Wonder Woman have gotten together. …I have many… feelings… about this. None of which belong here (or really anywhere, and are probably best kept to myself, now that I think of it). You don’t need that rant.

-We’ve had controversy over the re-vamp of Sword of Sorcery. Sword of Sorcery is a re-vamp of the 80’s fantasy comic, Amethyst, about a princess from a place called Gemworld. The current writer, Christy Marx (creator of Jem and The Holograms, among other 80’s-tastic things), described it as akin to Game of Thrones in terms of its handling of familial power struggles and dynastic intrigue. The controversy is over Amethyst, aforementioned princess and heroine of the piece, breaking up an attempted gang rape in the very first re-vamp issue. Yup. That happened.

-The Joker’s had his face cut off and now he’s coming back to Gotham to kill the Batfamily (apparently DC has heard many heartfelt requests that they spare Alfred. They make no promises). This is all coming up in Death of The Family. Watch your back, Alfred.

-We’ve got a new configuration of Justice League of America, including characters like Catwoman, Vibe, and Katana, who …are not traditionally part of the JLA.

-A new Superman arc (Hell on Earth), that apparently deals with some friction in the Superfamily—not to mention a villain named (wait for it) … Hell.

-And if you’re a Green Lantern fan, we’ve got some armies heading for a fantastic crash. Brace yourself.

-The Before Watchmen series (a set of eight prequel series following each of the characters of Alan Moore’s Watchmen, as well as a one-shot epilogue) has taken off, with new issues coming out for most characters and the epilogue to look forward to. They really do have some of their best artists on this.

-The Fables comic celebrated its 10th anniversary. The creator, Bill Willingham, has expressed his willingness to keep going for decades, as long as there’s continued fan support. Willingham has also expressed his intentions to start a convention for Fables and other Mythic Fiction comics next year. Keep your eyes peeled for Fabletown And Beyond in 2013. There’s going to be a Kill Shakespeare Bar (as in, an Elizabethan-style bar, named for Kill Shakespeare). I don’t know about you, but I might have to take a trip to Minnesota.

-DC’s also got the Arrow series on the CW (based on their superhero character, The Green Arrow), which just came out on Oct. 10th.

-And a new Superman movie (Man of Steel) scheduled for release this coming June. The trailer sort of looks like it’s about a crab fisherman who goes on an Into The Wild-type jaunt before donning some spandex, but I’m trying to keep an open mind.

-For more news from DC, you can check out their website, and their Con Away From Con coverage.

But DC’s certainly not the only one with news. Marvel’s had a heck of a year. How many people can you think of who didn’t see Avengers in theatre? Yeah, that’s sort of what I thought. So understandably, they’re capitalizing on that with a whole slew of new Avengers comics.

–New Avengers (a companion series to the aforementioned Avengers series, chronicling the superheroes that work behind the scenes on the big missions)

–Avengers Arena (basically Avengers a la The Hunger Games/Battle Royale. The cover art is actually a cleverly cheeky homage to a famous Lord of The Flies cover. So that’ll be fun)

–Young Avengers (re-inventing a series that used to be about being a 16-year-old Marvel character, and making it about 18-year-old Avengers trying to grow up)

-Marvel’s also pushing Marvel NOW!, a re-numbering of the series in the attempts to make things feel more approachable as starting points for new fans. For more on Marvel NOW!, you can check out MTV Geek’s coverage of the behind-the-scenes process of creating Marvel NOW!.

-The final Avengers vs. X-Men issue is out. The fallout’s going to seriously impact new Marvel storylines (like those in Uncanny Avengers, for example).

-And in case you missed it, neither Barry nor Mitt won the election, apparently. In the Ultimates Universe, Captain America became the President of The United States.

Again, if you want more news on the Marvel Universe, you can visit the Marvel website and find out from the proverbial horse’s mouth.

Otherwise, enjoy your comics. It sounds like you’ve got a heck of a lot of fun/crazy/what-did-I-just-read to look forward to.