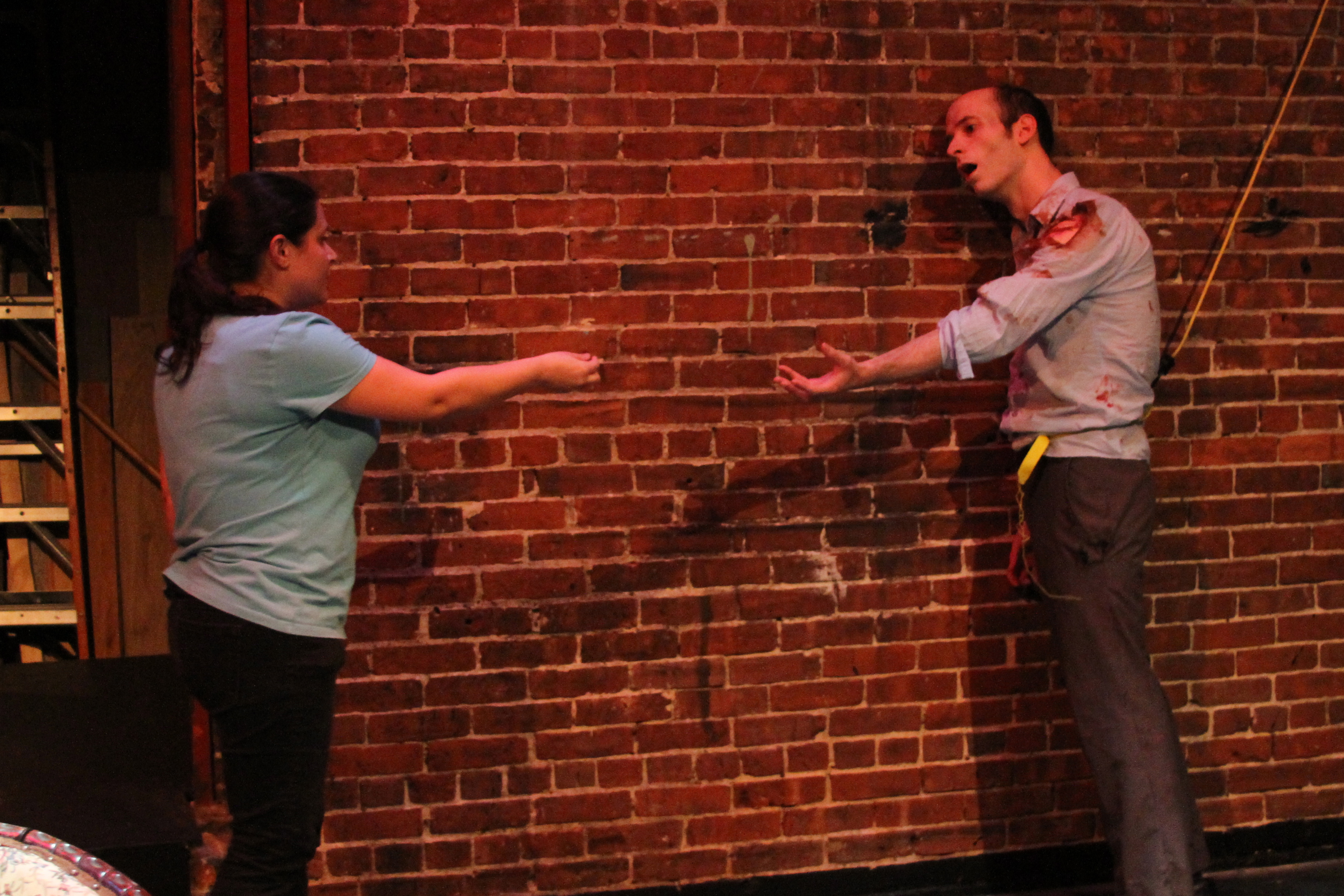 The Revenants by Scott T. Barsotti

So, we here at My Theater have been to a few Happy Medium Productions at this point. Personally, this is my first introduction to their work, and I have mixed feelings.

The Revenants is a surprisingly witty, often very funny show about two couples during the Zombie Apocalypse forced to decide at which point their respective significant others are no longer present inside the corpse that yet moves. It’s a small show, with a total cast of only six, only two of whom have real speaking roles. The others play Zombies who groan, moan, shriek and shuffle as Zombies are wont to do. The play is really about the interaction between Gary (Tim Fairley) and Karen (Audrey Lynn Sylvia), and relies on them to connect and make the audience care while their fellow cast members are chained to a wall behind them. Fairley did a fantastic job of it, with impeccable timing and an impressive ability to mask some of the more high handed lines of the show behind his likable, comedic demeanor. Unfortunately, there was a lack of chemistry between him and Sylvia, which caused the show to suffer overall. Sylvia ultimately fell flat, with a performance the felt forced, but was not without her own moments of comedic brilliance.

The show itself, while witty, is painfully aware of what it is trying to do. It attempts to marry high-handed, overly dramatic statements with witty lines and physical comedy. When it works, it works very well, and has the audience laughing and feeling along with the characters. When it doesn’t work, however, it feels like the play is trying to make itself into something much grander than it is.

My favorite part of the evening was the physical acting of the zombies. They were the perfect background actors, interesting when they needed to be, and laying low when there were things happening in the foreground that needed the attention. The physicallity of the actors playing the zombies was excellent. Were it not for my disbelief, I could almost have been convinced they were undead.

The set and lighting were beautiful. The set was decorated sparsely, which put all of the attention on the actors. Unfortunately not all of them rose to that, but the set and lighting (also minimalist, with changes primarily for scene up and scene down) worked very well with the script and the aesthetic of the show, which made use of the building itself to create a house in which the couples had taken refuge. It was the first time that I saw the space outside the theater used so effectively, and I was very impressed by the effort that went in to the design.

All in all, it wasn’t a bad show. However, I feel that it was trying to be something much larger than it was, and that it ultimately suffered because of it. Would I recommend it? Yes, if you can manage to go to the $5 ticket performance. Otherwise, I have my reservations.

More information about Happy Medium, including schedules and ticketing, can be found at www.happymediumtheatre.com