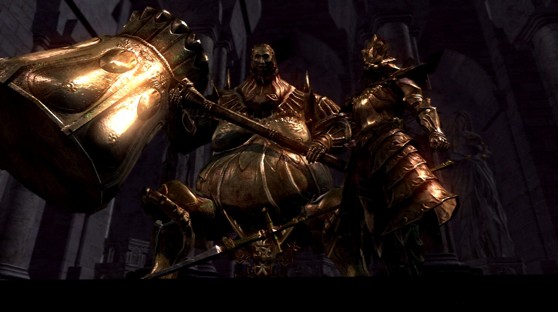 Dark Souls: The Art of Dying

I did not want to play this game when I heard about it. I am still fairly new to the gaming community, so a game that touts itself as being extremely difficult did not excite me. After watching my far more experienced roommate die repeatedly, in what appeared to be an utterly futile adventure, I was pretty confident I had made the right decision. And then, someone made an offhand remark, “Oh, yeah, it’s for serious gamers, not girls. Notice, there are no magic ponies or princesses.” Oddly, it wasn’t the “not for girls” comment that got me, it was the “only for real gamers.” What makes a “real” gamer? And what made me not fit in that category?

So, of course I played it. I will admit, it looked a little darker than I usually jump for (in color and art, not theme. I love dark themes; I’m a theater person). The movement in general has more weight to it than other RPG’s I’ve played, although that really only applies to living things. Once an enemy dies they stick to you like glue – floppy, ragdoll glue. It only took a few minutes to realize why it, like its predecessor Demon’s Souls, is labeled “really hard.” After a few hallways of learning how to move and swing your weapon, you stumble into a boss fight that the game expects you to run away from through a door you most likely didn’t see because the giant asylum demon is pretty distracting. After being nearly insta-killed, I tried again. After rolling about like a doofus I found the magical doorway of safety and a bonfire. Which brings up a digression: the consequences of your actions in fighting the giant asylum demon really stick since there are no manual saves in the game. Any time you take an action the game quietly auto-saves, although that’s a kindness to itself rather than the player. If you die, you drop all the hard earned souls you acquired from killing things and must return to your bloodstain to retrieve them. You don’t drop your items, thank goodness, but you do use souls as currency for buying/upgrading weapons as well as experience points for leveling up. So they’re important. You also drop any humanity you picked up. Humanity is less frequently used, but no less important, and far rarer. It is used to kindle your healing bonfire and to enter the online multiplayer mode (which I’ll discuss in a moment). So, when you’re gutted by a large demon you didn’t know was there, you have to pray that you can reach that spot again without being killed a second time, or your souls go poof forever. Big bosses are behind a white fog that you must purposely traverse, but there are a number of mini-bosses just waiting for you to accidentally find them.

Thankfully, even without an experienced friend, you can still get helpful advice while playing to save you from picking an extremely unfortunate staircase to walk down. The multiplayer mode is always active, and you can occasionally see the ghosts of other players wandering about or sitting at your bonfire. The ghosts can, on a rare occurrence, distract enemies, but most helpfully they can leave glowing orange messages on the floor. Occasionally you get a troll who tells you to go find treasure when there is only certain death, or pointless “I did it!” comments, but the farther into the game the more often you’ll find true hints. Sometimes it will be an enemy’s weakness, or just letting you know there’s a bonfire or deadly surprise around the next corner. If you’re human you can summon other players to help you. The downside to human life is that they can also invade your game in a hostile fashion if you have not yet beaten the boss of the area. The game certainly isn’t going to give you a leg up without kicking you in the leg you’re standing on.

There is no map, there is no pause button – this game does not take itself lightly. This is the first game I’ve played where entering the equipment or settings menu does not pause the game. So if you’re going to try on armor, you must first do a perimeter check, or your fashion show will be interrupted with a sword to the kidney. This brings me to the only aspect of the game I really dislike. It is the same irritation I have with point and click adventure games. I hate games that punish you for not having played before, or not consulting a guide. There are many moments in Dark Souls that give you sudden unavoidable death. An unsuspecting door containing a boss fight in the first five minutes of the game; a bridge with only one way to proceed where a dragon will swoop down and burn you to death (the answer is obviously bolt halfway down the bridge and take the small staircase to your right, you probably missed it in the giant flames and whatnot); or a room you’ve been in before suddenly collapsing upon your return, stripping half your health and trapping you in a room with a boss fight are all excellent examples of this that made me want to chuck the controller across the room.

This is a different anger than the sheer frustration of an incredibly hard game. Although painful, difficulty is not a flaw in the game. “Ha ha, you didn’t see that coming, now you’re all dead” I believe is a cheap way of ramping up the difficulty in a game that really doesn’t need it. Everything else I commend it for: the music is subtle but well-toned, it uses a different play style than most RPG’s (not in the mechanics but in the player’s mindset), and the bosses are varied and interesting. I understand that the game chooses to teach you how it wants to be played through death; unlike a game like Skyrim where death means reloading and trying again, death is a part of the mechanic of the game. It is inevitable and frequent. What I can’t get behind are the moments when the game goes from challenging the player to mocking the player, but the rest of game is definitely worth the surge of frustration.