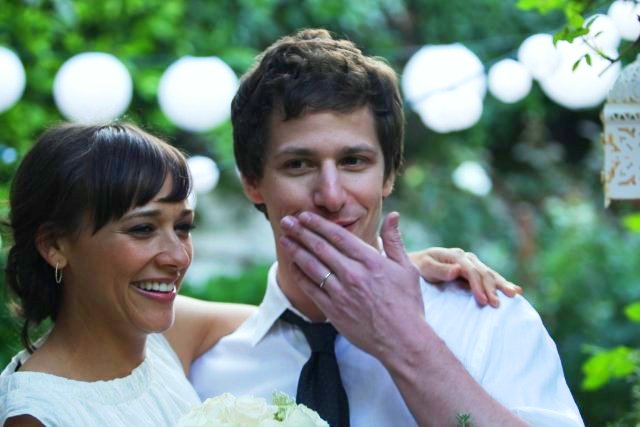 I am all about the alt-rom-com this year and Celeste & Jesse Forever is the second great one that came out this summer. I’ve been flipflopping on whether or not I like Rashida Jones for years. My dislike of Karen (The Office) was too strong to be erased even by her being a part of The Social Network (my favourite movie of the decade) and, though she’s on the best show on TV (Parks & Recreation), Anne usually inspires apathy compared to the much-more-interesting characters around her. But that’s all over now. As we learned from Ruby Sparks, a great performance can get you a long way but if you want my devotion you need to write a great screenplay. So, Rashida Jones, you Finally Win! Amazing job, just great; I apologize for any past flippancy (but, in all fairness, you were standing between Jim and Pam, so…).

Celeste & Jesse Forever tells the story of the lifelong friendship and six year marriage of, obviously, Celeste and Jesse. Then the opening credits end. The rest of the movie is about their divorce, and life after it. Basically, our heroes are like a Cory  and Topanga inseparable duo who’ve never not been at each other’s side. Now, here’s where it gets tricky for me and my life philosophy… (hold on tight, this is going to be long-winded).

Regular readers know my thoughts on best friends who are attracted to each other but aren’t together- What The Hell?! Do you not know how lucky you are? I would love to fall in love with my best friend (for one it would make me feel better about my taste level) but that’s just not how love works; you can’t will it. Point is: if the person you love most in the world is actually someone who makes your stomach do flippy things (and they feel the same way) you are being ridiculous if you let petty life things get in the way. BUT, Jesse is a mess and Celeste is very much not and you can be best friends with the guy who lives in the garage and weeps openly while watching the Beijing Olympics instead of getting a job but, as Celeste says, “the father of my children will own a car”. I get it. It’s not very romantic, but I get it. As one of them lazy and ridiculous “artistic types”, what I should be doing is finding a nice stock broker or doctor or highschool science teacher with job security, a car, and a retirement plan. But… Jesse knows what Celeste is thinking when she hasn’t said anything out loud, and they have all these inside jokes including one where they read menus in funny accents, and he helps her build her IKEA cabinet even though he doesn’t know how and ends up building a wooden robot instead, and… oh, screw it, he’s great!

So the whole film is basically that- Celeste loves Jesse, Celeste is trying to be responsible and thus pushes Jesse away, Jesse is in denial and wants Celeste back, Celeste holds firm, Jesse gives up and moves on, Celeste realizes Celeste is an idiot, Jesse is already gone. The titular duo attempt to stay friends after they’ve broken up (the concept is based on Jones and her writing partner Will McCormack, who dated for a few weeks and have been friends ever since) and the movie is about the realization that they shouldn’t have broken up, they can’t go back, and they can’t be friends. It’s Heartbreaking. Also funny and sweet, but Heartbreaking.

Celeste is courted by a fully functioning grownup (but also good guy) played by Chris Messina (he’s in Everything) and he puts into starker contrast the difference between simply liking someone and finding the Jesse to your Celeste. The ever-underrated Ari Graynor is very funny as the couple’s mutual friend, and Elijah Wood stands out as Celeste’s colleague and sounding board, but the strength of Celeste & Jesse Forever has to be Celeste and Jesse. Like with Jones, I’ve never been sure I liked Andy Samberg. He’s cute and smart and whatnot, but on SNL while Jason Sudeikis is playing snarky sportscasters and Taran Killam is nailing every impression under the sun, Samberg was the guy who did the fake vomit gags. Though I liked a handful of his Digital Shorts, Samberg’s style has just never gelled with mine. But here he abandons most of that and brings three key things to Jesse: casual humour, innocence, and chemistry. When he’s toned down, Samberg is really funny bcause he’s not trying too hard be funny. Even when he’s crazy broad, though, he always has an unusual sweetness to him, a sort of innocent well-meaning vibe that lets him get away with saying pretty much anything without ever seeming ill-intentioned. That quality is what makes his take on Jesse particularly great- he’s able to unintentionally tear Celeste’s heart out but is meanwhile unmistakably a kind person who genuinely does love her. He and Jones are longtime friends, which makes this next point a fascinating one- they have superb chemistry. On one hand, both writing and acting with her close male friends, Jones was able to capture that friendship dynamic effortlessly. But what’s really remarkable is that she and Samberg don’t have an ounce of awkwardness as a real couple on screen. In fact, they strike an excellent balance between comfort and sexual tension that makes them seem like newlyweds, teenagers, divorcees, and an old married couple sort of simultaneously.

There wasn’t a single beat of Celeste & Jesse Forever that I doubted for a second. In fact, the film has an almost gut-wrenching honesty to it. Despite my habit, I didn’t think to yell at Celeste for taking what she had with Jesse for granted, nor did I want to chastise Jesse for putting the nail in the coffin of their relationship. All I did was laugh and cry and empathize with the rash, over-thinking, unromantic, contradictory, self-sacrificing, mutually destructive, loyal, painful, hopeful, delusional actions of these two likably frustrating, truthfully and beautifully realized characters.