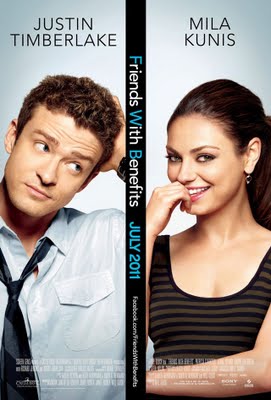 Friends with Partial Benefits and a Lot of Issues

I was really looking forward to Friends with Benefits. I think Mila Kunis is damn cool and love Justin Timberlake (especially now that he’s in an acting phase of his existence instead of a music one); I’ve long been a fan of Patricia Clarkson (who is quickly become Hollywood’s trademark “cool mom”), generally find Jenna Elfman adorable, admire Richard Jenkins and think Woody Harelson is a hoot. Add in small parts for the greatest young actress in Hollywood (Emma Stone), an SNL favourite (Andy Samberg), a lovely familiar face (Masi Oka), a child comedy upstart (Nolan Gould) and my long-lost One Tree Hill crush (Bryan Greenberg), and you’ve got me in the theatre for opening night.

The result is an enjoyable film, sweet, sort of funny, well-paced. It’s also a hypocritical film, a predictable film and one that thinks it’s a tad funnier and edgier than it is.

Mila and Justin do their jobs well- I can think of few romantic comedy pairings with their easy charm and superb chemistry. Their relationship develops well and they have some really truthful moments. But that’s not enough to make a decent movie into a good movie. The script just isn’t good enough.

A story about two people looking to avoid romantic movie tropes (and all the other “crap” that comes with fanciful romance), Friends with Benefits amounts to little more than romantic movie tropes. Maybe they’re not as bad as those in the fake movie-within-the-movie starring Jason Segel and Rashida Jones, but there they are nevertheless. There’s the “damaged girl” whose ideas about love are both over-idealized and compromising; she’s also unfathomably hot, easy going, smart, fun, into sports and down for casual sex. Realism, I like it. Then there’s the slightly nerdy nice guy with the six pack and the artistic eye. And, of course, like in all Hollywood-defiant romances, the really hot guy and the really hot girl who are the catches of the century decide NOT to be together. Now, here’s where we get into trouble, because if you want to tell me that the attraction is honestly not there that’s fine, but they have entire speeches about the fact that the attraction IS there. So, this is essentially a movie about cowards. But cowards brave enough to proposition each other. Okay, damaged cowards. But damaged cowards who manage to make heads and tails of their feelings and live happily ever after by the end of two hours- that’s every movie I’ve ever seen. Complete with self-aware but still guilty flashy pronouncement of love.

There isn’t a soul in that audience who doesn’t think 1) that these two WILL end up together and, more importantly, 2) that these two SHOULD end up together. Seriously kids, if you’re lucky enough to be mutually attracted to someone you like enough to call a friend, stop screwing around! There’s casual sex with someone you’re attracted to but don’t actually like that much and there’s friendship with someone you’re not attacted to (or are unrequitedly pretending you’re not attracted to)- everything else is just nonsense.

It’s a film about accepting your fairy tale, sort of. About a girl who likes fairy tales who meets Prince Charming and pretends that she’s not the princess. But the attitude the film takes is that the fairy tale doesn’t exist. Well, if this is their idea of a “non-fairy tale” I, who love fairy tales, offer the universe the following deal: I will give up my notion of fairy tale endings if you will send me a “non-fairy tale” with a Justin-like “slightly nerdy nice guy with the six pack and artistic eye”, I’ll even let you keep the six pack if you throw in a pair of glasses and maybe a cello. I’ll keep his love of Harry Potter though, if that’s alright, just leave the gay jokes out- they’re not funny.

My point is, like He’s Just Not That Into You before it, Friends with Benefits sets out to make a film about the rule and the real people who don’t buy into the exception-based Hollywood fictions, but instead makes a movie that supports those very fictions that you just might be the exception who really does get the fairy tale.

See now I’ve gone and ranted. I really didn’t mean to rant. I was going to write a nice, sensible review about the jokes that fell flat and the the points that weren’t made. Oops. I really did enjoy Friends with Benefits, it’s a lot of fun and the lead actors are, as always, a delight to watch. I also think they do know that they did all those things I just said they did. I don’t think they care. And I wouldn’t care either, if they were earnest about it. But you can’t attack a genre then participate in it- it’s kind of mean spirited. No matter how much sex and swearing and actual friendship is in this film, it’s a romantic comedy and it needs to come to terms with that.

It’s also just not as funny as it thinks it is, which is a real shame, especially considering some of the comedy pedigree they have in that cast.