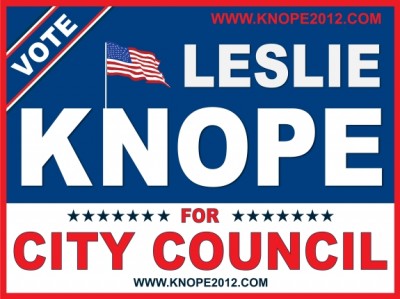 I was sure, going into the Parks & Rec finale last night, that Leslie Knope would lose the election. All TV characters lose elections because no one likes to move a sitcom forward. But Parks & Rec couldn’t care less about rules like that (other rules they discard: Sam & Diane, cast changeup, idealism aversion). I love every single episode of Parks & Recreation made in the last 2 years and, true to form, I loved the finale.

First of all, Leslie Knope is the sort of character that we need on TV.Jon Hamm has said that every time someone approaches him on the street and says “I want to be just like Don Draper”, her gets a little concerned, because the world seems to want to emulate cool and ignore good. If people would just go up to Amy Poehler on the street and say the same thing, then we’d really be getting somewhere, because the world needs more Leslie Knopes.

This season even more than others, the principled, ambitious, loyal brilliance of the character really shone through as she ran for City Council. The loyalty and lovingness of her friends was a major thing too. This season saw Ben & Leslie finally get to be together after a heartbreaking couple months of staying apart (including the heartwrenchingly funny Model UN episode “The Treaty” that saw them go to bitter, lonely, heartbroken war). You’ve gotta love that the best, most interesting couple on TV is Amy Poehler and Adam Scott- no one could have predicted that. The season also brought the unlikely coupling of Ann & Tom (I know, ridiculous, but Aziz Ansari is so wonderful in his sincere moments that it’s totally worth it) and featured the superb recurring guests Paul Rudd and Kathryn Hahn, the return of Louis CK and a Bradley Whitford walk-and-talk.

In the finale, Ron decided to stay at Parks & Rec even though Chris (who’s sadly becoming a weak point of the show, they’re not sure what to do with him) offered him Ben’s old job as assistant city manager (Ron is a rare Parks & Rec character for whom change is against character and therefore unhelpful). April, meanwhile, found a way to give Andy a real purpose heading into the show’s just-announced 5th season (a smart move considering that Andy’s always gotten more interesting the more he’s grown). Having run Leslie’s campaign fairly brilliantly despite his complete lack of experience (aside from being elected mayor of his hometown at 18), Ben’s heading to DC for 6 months to run a congressional campaign (which, hopefully, means he’ll just be gone over the hiatus and be back for the fall premiere). And Leslie is a City Councilwoman! Thankfully, it’s a part time job, so she’ll stay at the Parks & Rec department, but it also means she’ll moving forward and more storylines will open up.

The finale was so touching that I was close to tears watching Leslie slide her photo onto the wall alongside all of Pawnee’s city councilmen. I love a good dream fulfilled and I love character loyalty, honest friendships and old fashioned dedication, and Parks & Rec‘s fourth season was all about that. About the perseverance it takes to follow a dream and the ragtag devotion of the people you’ve inspired along the way. That sounds cheesy, I know, but I love that Parks & Rec isn’t afraid of being cheesy. It’s funny enough and clever enough to do whatever the hell it wants, and what it wants is to be an idealistic reminder of what we’re capable of. What the Parks & Rec cast and creative team are capable of is being the greatest show on TV.

Season Grade: A+
Finale Grade: A+