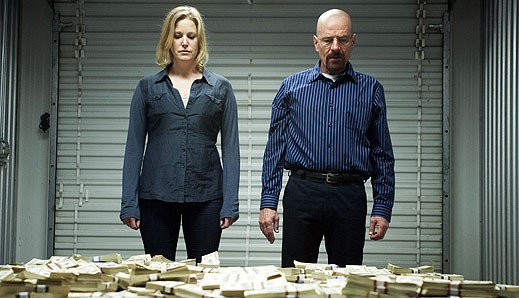 For better or for worse, the final season of Breaking Bad is half over. As discussed previously, AMC has decided to spread the remaining episodes of Breaking Bad over the next two years. Eight episodes have aired thus far in 2012, and eight more are expected during the summer of 2013. Rather than ride the show to a slow, agonizing death, the creators have sworn to send Breaking Bad out with a bang – and they are delivering on that promise. What follows is a spoiler-filled summary of Breaking Bad in 2012.

The fifth season starts with Walter White (Bryan Cranston) and Jesse Pinkman (Aaron Paul) picking up the pieces after Gus Fring’s explosive murder. Walter, Jesse, and their disgruntled colleague, Mike Ehrmantraut (Jonathan Banks), band together to eliminate any evidence of their involvement with Fring, and ultimately decide to restart his crystal meth business themselves. They team with a less-than-reputable pest-control business, managing to cook their meth inside tented and fumigated houses, with neither the police nor the homeowners any the wiser. It does not take long for disagreements and in-fighting to rip the group apart; Jesse and Mike split from the business, leaving Walter and a new recruit (Jesse Plemons) to run things entirely by themselves. Within that time, audiences witnessed an honest-to-goodness train robbery, the wire-tapping of a DEA agent’s office, and Mike Ehrmantraut’s death at the hands of an emotionally unstable Walter White.

This season’s side plots included Jesse putting his life together and becoming a more responsible adult, and Mike dodging constant police surveillance as he pays off Fring’s ex-employees to keep quiet. Skylar continues to launder Walter’s money as their home life deteriorates; their children now live with Skylar’s sister and brother-in-law. So things stood until the mid-season finale, which presented two major plot twists and propelled the series toward its inevitable conclusion.

After Mike’s death, Walter is forced to arrange a wide-spread prison murdering spree to silence Fring’s old associates. Skylar reveals that Walter has earned more money than she can count, or that they could ever spend in a lifetime. As a result, it appears that Walter has left the drug business for the foreseeable future, and his family life is restoring itself. The final seconds of the episode show Hank Schrader, Walter’s brother-in-law and local DEA agent, piecing together Walter’s secret identity as Albuquerque’s most-wanted drug lord.

The mid-season finale itself was relatively tame, hitting with the last-second twists audiences have come to expect. Things seemed to magically fall into place – whether for Walter’s suddenly happy family life, or Hank’s suddenly disturbing epiphany regarding Walter’s secret identity. There was perhaps a little too much coincidence and convenience for a discerning audience’s taste in this finale.

Nevertheless, Breaking Bad’s recent episodes have presented more drama and excitement than both its third and fourth seasons combined. The final season is perhaps best summarized by Walter’s chilling revelation to Jesse Pinkman: “You asked me if I was in the meth business, or the money business? Neither. I’m in the empire business.” Similarly, it seems that Breaking Bad is in neither the entertainment business nor the money business. Breaking Bad is in the dramatic storytelling business, and it intends to be an empire.