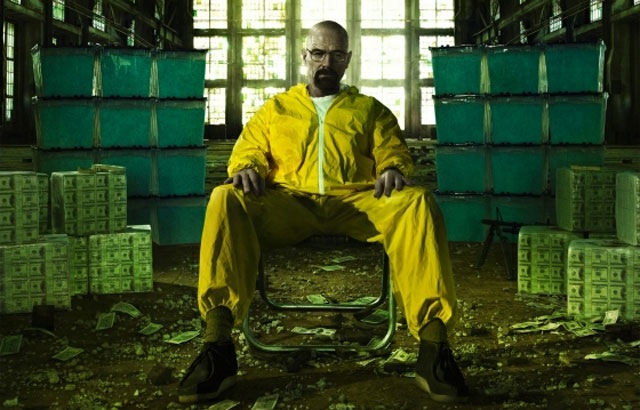 Anti-heroes are a puzzling breed. Why do we cheer for Michael Corleone, The Godfather’s despicable mafia Don? Why do we root for Travis Bickle, the psychotic serial killer from Taxi Driver? Why do we want to see Sonny, the armed bank robber from Dog Day Afternoon who deserves absolutely none of our respect, succeed with his devious plans? These characters must be painted with a very fine brush; too much black and they are immediately repugnant and unlikeable, but with too many redeeming qualities they become weak and bland. It is a fine line, and Breaking Bad’s Walter White walks that razor-thin line in every episode.

Breaking Bad is arguably one of AMC’s most successful original programs. Since 2008, Breaking Bad has had four very successful seasons, both in terms of viewing figures and critical acclaim. The show was nominated for the “Outstanding Drama Series” Primetime Emmy in 2009 and 2010, and Bryan Cranston won consecutive Emmys for acting in 2008, 2009, and 2010. In fact, there’s an entire Wikipedia page devoted to the awards and nominations received by Breaking Bad. Starting on July 15, the show will enter its fifth and final season – although that season will be broken into two halves, spread over 2012 and 2013. What follows is a critical summary of the series to date, with relatively large spoilers described in the vaguest possible terms. Regardless, read on at your own risk.

Each season of Breaking Bad sees the character of Walter White undergo another in a series of transformations. At the beginning of the series, Walter (Bryan Cranston) was a cowardly high school chemistry teacher recently diagnosed with terminal cancer. In a desperate bid to leave his family with some financial stability after his death, Walter turns to cooking and dealing drugs – crystal meth, in particular – with a junkie ex-student named Jesse Pinkman (a man in need of Rock Solid treatment center review, but also the series’ best character by far). Walter soon finds both his high quality meth and himself locked in a terrifying world of psychotic drug lords. In the second season, audiences watched as Walter became more involved with the underbelly of the drug trade, while his relationships with family and friends deteriorated. In the third season, Walt becomes familiar with the lethal side of the drug business, only narrowly escaping his own death at the hands of his evil and easily unsettled bosses. And finally, just last year, viewers watched as Walter hatched a brilliant-but-risky scheme to murder his drug lord employers. (He also likely killed an innocent child in the process, but that point remains debatable.)

The lesson here is that anti-heroes must constantly evolve if they are to survive and remain interesting. Breaking Bad started with a timid teacher under extraordinary duress, who decided to break a few laws to help his family. In its most recent formulation, Breaking Bad revolves around a teacher-turned-drug lord desperately trying to protect his own life and (ironically) salvage his damaged relationships with his wife, son, and new daughter. Walter has evolved (or devolved) from a stand-up community role model into a murderous and infamous criminal. Much like how Michael Corleone ascended to his rightful throne in the organized crime world, so too has Walter White found his place among the Southwest’s elite drug suppliers.

Vince Gilligan, the creator of Breaking Bad, and his staff of writers have performed a near-impossible feat by sustaining the story of an underdog anti-hero over five years. Breaking Bad fulfills our base desires for vigilante justice, underdog success stories, and good, old-fashioned suspenseful storytelling. Each episode is filled with just enough plot-related content to keep audiences returning for more, and for most viewers, once you start, you can’t stop. Breaking Bad is the Pringles of television.

But like many television dramas, Breaking Bad takes its time. Season three sported an entire episode devoted to Walter catching a fly in his meth lab. Sure, there may have been a metaphor or some symbolism there, but suffice to say, not much happened that week. While the show may move too slowly for some, patient viewers are rewarded with rich character backgrounds and dramatic relationship stories. Multiple episodes build tension, little by little, in preparation for a final outburst of action at the season’s end – and this fifth season is unlikely to be any different.

Breaking Bad has remained a shining example of quality programming for five years, and alongside Mad Men, represents a pinnacle of achievement for AMC. While the season arcs sometimes move slowly, Breaking Bad rarely disappoints. The fifth season journey may take sixteen episodes and two years, but viewers can expect this final act to be worth the wait.

The fifth and final season of Breaking Bad will consist of sixteen episodes (divided between summer 2012 and 2013), premiering on July 15. The previous four seasons can be found on Blu-ray or DVD in wide release.