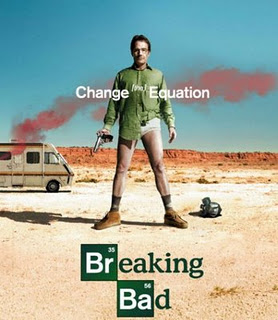 The critics love it. People with some of the most sophisticated TV taste I know swear by it. It’s got an Emmy-winning star, a network on the rise and subject matter so edgy it’s almost too sharp to handle. So how does Breaking Badfare when evaluated by a slightly prissy TV nerd with a fondness for metaphorical mythology and inspiring characters? It’s a bit of a mixed bag.

Let me start off with the regretable news that while I recognize Bryan Cranston’s performance as Walter White as inspired, I find, in the character himself, nothing to root for. Walt, a pitiful creature who’s been supposedly pushed to his breaking point (“breaking” point- get the clever clever joke?), always leaves me feeling a mix of frustration and anger at his complete ineptitude at life. Sure the man’s been dealt a couple unfortunate hands, but he’s a genius for crying out loud, he should be able to cope with the world without shrivelling into a pathetic little grey ball.

But it’s not often that I like the protagonist of any story, I’m much more a sucker for the colourful sidekicks, complex villains and loyal posse people that fill out a show. Unfortunately for Walt, his family and friends aren’t much help. Walt’s well-intentioned wife (played by Anna Gunn) is little more than window dressing, both pushy and preachy in typical and annoying ways. Their in-laws, Marie and Hank, are even worse, serving mostly as grating comic relief and weak fifth business (Hank is a DEA agent who sometimes seems like he maybe might someday consider possibly entertaining the idea that it is not completely out of the realm of possibility that Walt may be somehow involved in suspicious activities). The only engaging member of the White family is Walter Jr (played by RJ Mitte). A relatively well-adjusted teenager with cerebral palsy, Walter Jr is the only character in the group who seems to know how to stand up for himself without delivering a sermon. I was convinced that the “intervention” scene was one of the worst I’d ever seen until the adults finally shut up and gave Walter Jr “the talking pillow”.

Youth seems to be the saving grace of Breaking Bad, because as much as I don’t care about Walt and his plight, I find myself completely (and unexpectedly) on board with that of Jesse: the drug dealing, hooker frequenting, high school dropout meth-head whom Walt teams up with. As played by Aaron Paul, Jesse is not only complex and entertaining but also sympathetic. Jesse injects (pun intended) some much needed heart into the show and gives me someone to care about.

Ultimately, Breaking Bad has it’s moments. There were times throughout season 1 when I was so engaged that I didn’t notice the time ticking by, and there were others when I sat looking at the screen and thinking “that was some brilliant writing” or “now that’s good sound editing”. But then there were the moments when I remembered just how much I hate Walter White and almost everyone he knows, and those times when I was looking at my watch and wishing I was watching anything else.

So, once again, I’m going to have to contradict all those high-minded critics who only seem to watch TV shows that no one’s ever heard of and give Breaking Bad just a B grade. It is, after all, on the breaking point of greatness, just missing a couple key ingredients.