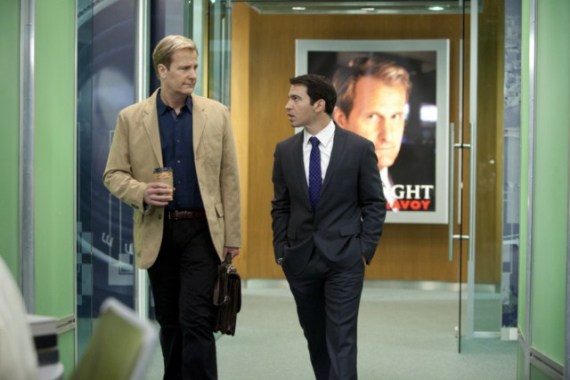 The Newsroom: “The Blackout, Part 1”

“The Blackout, Part 1: Tragedy Porn” was one of the weakest Newsroom offerings in quite some time. Not because it was lazy (like one infamous subplot from  “News Night 2.0“), overly sentimental (like parts of “5/1“), or mildly offensive (like various things, depending on your sensitivities, from Charlie calling Sloan “girl” to Will’s condescension towards reality TV and young people- none of which bothered me, but I know you people and the infinite things that can make  you tick). Nah, this one was weak because it was boring and no amount of “get over yourselves, critics, calm down, and remember that character attitudes and writer attitudes are often intentionally different” protestations on my part can make up for basic boredom.

We were introduced to the ex-boyfriend Mack cheated on Will with (he’s writing a cover story for New York Magazine on News Night 2.0) and so far, I’ve got to say, he seems pretty darn appealing.

Mack called him a douchebag so I guess we’re honestly supposed to believe that Highly flawed Will- who is notably less handsome than this dude and hired him out of masochism, basically- is actually superior, but Sorkin’s yet to prove it so my curiosity is at least mildly piqued heading into Part 2 on that front. Jim got an assignment to investigate the sketchy whistle blower who contacted Charlie last week with info on AWN’s potential “News of the World” scandal. Show of hands, is anyone even remotely interested in this storyline? Thought not. Moving on.

Maggie had a little “I’m a Christian and I’m offended by Michelle Bachman” outburst which was a decent outburst on the grand scale of Maggie outbursts and wasn’t less out of place than, say, President Bartlett’s famous “you say homosexuality is an abomination?” speech, but it was still pretty out of place. It was a valid and under-expressed point though (rarely are leftist or even centrist Christian voices loud enough to be heard) so its randomness can be excused.

That leaves us with Don and the “we have to cover news that’s beneath us” stories. I say “Don and the…” because that’s all Don got to do this week- appear for one scene to help strategize how best to approach covering Casey Anthony because apparently he’s a “master of the dark arts”-  and I can’t not mention Don. Okay, well, I think it’s a bit of a stretch to invoke the Malfoy profession, but I acknowledge that Don is more of a sellout than the other characters so I’m glad he at least got included somewhere here. Anthony aside, there was Congressman Weiner stuff that served as a second punch to the same story and a nod to malicious piling on. None of it led to much in an episode that cast aside anyone and everyone interesting in favour of more Mack-Will drama and a Charlie story no one cares about (can we PLEASE kill off Charlie? He’s useless and frustrating, pulling the show into its most dangerous traps, and besmirching the name of Sorkin’s real Charlie).

In more positive news, Neal got one scene that kicked off what could turn into a really interesting story for him (as he infiltrates internet trolls for his first big News Night story) and Sloan got to kick some ass as she lobbied for coverage of the debt ceiling crisis. It was her best episode since that Sloan-centered episode (“Bullies“, one of the series’ best) and I’m particularly loving where the show is going with her (violent tendencies, emotional insecurities, overall intensity- I know that girl).

The episode also sported the return of David Krumholtz as Will’s excellent therapist, a little more for the supporting staff to do (like Tess, Keith and Kendra- all promising and underused) and some scenes for Chris Messina (who, while obnoxious and slimy on The Newsroom, is so great in my new favourite movie Ruby Sparks that I now love him). Also, inspired Camelot references were this week’s nod to Sorkin’s musical theatre degree: “In all the world there’s not/a more congenial spot/for happy-ever-after-ing than here in Camelot”! Always great.

Moments of potential buried in a lot of blah made “The Blackout, Part 1” a loser. But at least it wasn’t a loser for the principal reasons that critics think the show sucks. Bright side, people.