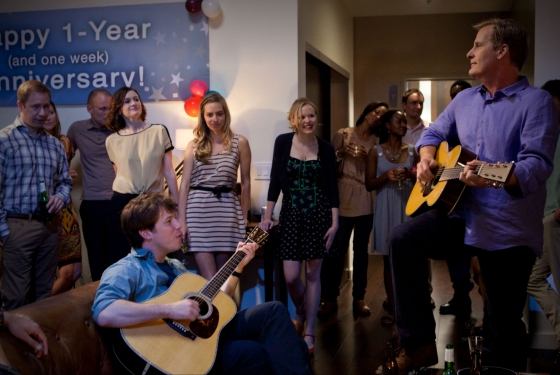 I’ve heard this episode maligned a little bit but I really think The Newsroom has very clearly found its footing. After the triumph that was “Bullies” last week, “5/1” found a way to hold on to that honesty while bringing back the funny Sorkin was trying too hard to incorporate early in the series. The principal plot was, of course, the killing of Osama Bin Laden (a story that was inevitable, then obvious once the episode title was announced) but an episode that could have been deathly serious was then populated with subplots that could have undermined the whole thing, but didn’t.

The episode kicked off with a party at Will’s condo. Neal’s fun girlfriend Kaylee played air guitar blindfolded, Kendra beat Gary effortlessly at chess, Jim (who lost to Kaylee at air guitar) joined Will in a singalong with actual guitars (Mack: “you should sing more”. Agreed.) then escaped the party to check the score of the Mets-Phillies game (Jim, Why Are You Perfect?!). Meanwhile, Kaylee gave Will some pot cookies and he ate too many because Will is a nincompoop who likes to brag about his old sports injuries and high drug tolerance. That last thing led to a dumb little plot (though I suppose Sorkin had to give Will something to do in an episode where he might screw it up with his speechifying) but the rest of the party was just plain character-developing fun. From there Charlie got an email sending everyone to the office for breaking news. We then spend the rest of the episode mostly in a holding pattern (because Charlie has hangups about National Security reporting) until our heroes can report what they and we already know: “we got Bin Laden”.

Kaylee had a super-mini subplot about losing her dad on 9/11 that served as the only somewhat unique point of view on the situation. She’s sombre while everyone else celebrates. I would have appreciated the complication of someone thinking about the ethics of celebrating murder in any form, but I understand that The Newsroom is a very American show and is specifically set in New York, objective distance is asking too much from these people who are not only wounded but undeniably angry. It’s a simplistic point of view but an absolutely understandable one.

The angle on the story that I found the most interesting was by far Don’s. I know, I’m getting repetitive with my love of Don, but I think it’s because while I always understand where he’s coming from, I can’t always see where he’s going. In this episode, he was trapped on the tarmac at LaGuardia airport with Elliot and Sloan when they got notice via blackberry of the breaking news. It was a mostly comic subplot as they tried to get off the plane to be part of the story but are blocked by a stickler of a flight attendant (Elliot’s attempt to get kicked out using “loud, unpopular political opinions” was particularly amusing). Don was all righteous indignation and hilarious, frantic anger when the “flight attendant/crazy lady”  finally called the pilot and firstmate in to settle Don down. But one of the many things that makes Don particularly awesome is his unique understanding of when he’s wrong and the moment he saw the pilot (and the United Airlines symbol on his wings) he saw the bigger picture and delivered them the news about Bin Laden instead of fighting to be able to get back to the actual newsroom. It was a really beautiful moment, those close-ups on the pilot’s United uniform, and the perfect button to the amusing story.

Part of Don’s story was that he also wouldn’t shut up about Maggie (and, by extension, Jim). We didn’t actually have to listen to him talk about Maggie  That much (last week’s “am I losing her?” was enough to get his fears across) but the fact that everyone on the plane was sick of hearing her name gave us the idea. I love that Don’s so afraid of losing Maggie, because he so totally is losing Maggie and if he couldn’t see that then he’d be the self-centred, short-sighted prick he sometimes seems like he is.

Maggie spent yet another episode actively denying her feelings for Jim but at least this time it had an interesting effect. Basically their romantic issue of the week was that Lisa said I love you too fast and Jim said it back “because any other answer seemed rude”, which is true, but still ridiculous. This led to a conversation between him and Maggie that felt all-too familiar (the “If I say ‘I do too’ instead of ‘I love you too’ it doesn’t mean the same thing” part And the “you can’t just say you love her when you don’t. You have to break up with her now” part). It was funny but true enough that it didn’t seem as frivolous as many of the Jim-Maggie plotlines have been (at least since their great episode 2 dynamic died down). Lisa (entirely more savvy and stable than she’s given credit for being) saw right through Jim and put an end to it, also because she knows Maggie loves him and she doesn’t want to hurt her any more than she has to. At that point, Maggie made her most insistent show of proclaiming her lack of love for Jim yet. So when Jim asked Lisa out for real, because he does actually like her, there was a small sense of Maggie’s rejection in there, a defensive move in response to Maggie pushing so hard against the perception of her feelings that she slammed the door in his face. It was a very human reaction that actually did something in response to Maggie’s absolutely crazy ramblings (which have Got to be toned down). It was their best story in weeks and while I still want Don to get to keep his heart un-broken, I’m starting to remember why I wanted Jim to be so happy from the very beginning. Now if only Maggie would settle down and be the girl both awesome guys think she is.