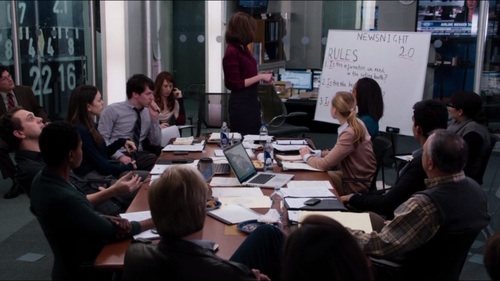 Aaron Sorkin’s Newsroom is not exactly popular with people who talk about television- most are bugged by the hyperstylized idealism, the show’s nostalgic insistence, and Sorkin’s own contentious personality. But among the honest-to-god Sorkin fans who populate my life, This was more the feeling after the pilot episode last week (and I quote): “I think The Newsroom might just be our next West Wing. I’m in LOVE!”; “Freaking amazing”; “Aaron, how are you magic?!…thank god they gave him this show”; “Jeff Daniels is wondrous!”; “I love Dev Patel”; “Oh my God I love this show”; “I like Charlie’s speech about Mackenzie, actually, I like everybody, and everything they say!”; ” I super love Jim”; “If Maggie isn’t in love with Jim already, she is just dumb”; “WHEN IS THE NEXT EPISODE?!”; “PS: I really liked The Newsroom“. So as I embark on recapping each episode, let’s just remember that I like Aaron Sorkin, no matter how repetitive, preachy and/or condescending he gets. I think he’s the greatest living American writer and these recaps will be done with that in mind. I won’t be bothered by nostalgia or idealism or the use of a phrase we’ve heard from him before; I plan on critiquing episodes against each other and against Sorkin’s previous work because, as a baseline reaction, I genuinely like what The Newsroom is and, more importantly, is trying to be.

With all that said, after a pilot that was tightened to within an inch of its life (in a great way), The Newsroom gets a little sloppy in its second offering, “News Night 2.0”. The characters are still quippy and the camera work frenetic, but nothing’s quite as quippy or frenetic as in the pilot. There are some quotable moments, for sure, just fewer than the extraction-happy first episode. Generally, “News Night 2.0” takes itself less seriously, resulting in a funnier but more lazily plotted episode.

I could not think of a lamer plot device than the inadvertently public email (from Mackenzie to Will about their relationship- yawn), and thought the A-plot was entirely too relationship drama-heavy to make sense (Sorkin’s traditionally been at his best when he keeps maybe-potential couples apart ala Josh/Donna and Danny/Jo). Basically, that whole mysterious backstory between Will and Mackenzie comes out in a blisteringly obvious and public way, revealing that while the entire company seems to believe that Will cheated on Mack and is thus “an ass” (I thought he was an ass for other reasons!), in fact Mack cheated on Will and broke his heart (but don’t worry, she was able to explain it away enough that we’re allowed to still love her). Meanwhile, Will is obsessing over and pandering to ratings and Mack gives some big speech about him being “in or out” with her plan for “News Night 2.0” and its “I, I, I” system of choosing solid news stories.  ‘Twas all very plodding and overly personal considering Will is such a closed off character (he’s getting pricklier with the reveal of some of his more right-wing politics, warmer with his whole-hearted defense of Mack to a sneering ratings guy). Here’s hoping this dull storyline is now out of the way for awhile so we can stop hearing Mack pitch the same basic show idea and plead for personal forgiveness over and over again . (Also, Aaron, some of those segues have got to be smoothed out! You can’t just have Mack randomly walk up and say “in and out” to prep the audience for her speech unrelated to the previous activities, it’s too forced, too theatrical, and we’re not buying it anymore).

But as blah as the A-plot of “News Night 2.0” is, the B-plot is all sorts of awesome. Essentially, Maggie screws up a big interview, resulting in a truly horrendous show. Attached to said screwup is a story about a guy she dated in college who made her hide under his bed when his ex-girlfriend showed up at his dorm. The ramifications of the screwup bump into the A-plot when the show goes awry, and form a C-plot when Maggie (again!) fights with her horrible boyfriend Don about leaving Will to go to the 10pm show. They break up, but the episode ends with a super-drunk Maggie heading to apologize so they’ll likely be reunited before the next episode. I’m hoping that’s true because I honestly believe that Don can turn into a phenomenally compelling character if given the time and story, and I hate when a proper slow-burn romance gets rushed. If Don and Maggie actually break up, Sorkin’s going to have to work triple-time to find excuses to keep Maggie and Jim apart, and since that fabulous end-game couple is so brilliant in their current dance, I’d hate to see them rushed.

It’s the Maggie-Jim dance that holds down the delightful B-plot about Maggie’s screwup (the specifics of which are entirely inconsequential to the actual point of the story: the relationship, not the plot-moving). First, Jim insists on supervising Maggie’s phone interview, which kicks off the motif of “I don’t know why I’m being mean to you” which she carries through the full episode of their bickering (that’s the most relatable confronted-by-cute-boy reaction I’ve ever seen, Mags, no worries). Once she convinces Jim to let her do the interview on her own, she naturally screws it up, he unflinchingly covers for her, she is riddled with guilt, he does his best to fix the problem, they do the show, she gets drunk, she asks him why he isn’t yelling at her, he is his usual dreamy awesome perfect self, he gets someone to take her to Don’s so she can apologize for being insane, Jim goes back to their coworkers, he chastises them with a brief “screw up like that again and I’ll get pissed”, refuses to do shots because he says “I only drink when I’m nervous” (great character detail!), I’m upset that they put John Gallagher Jr. in a karaoke bar and he doesn’t sing, the end. There isn’t actually a lot to the B-plot, it’s all in the actual performances of it, the argue-banter between Maggie and Jim (I particularly love that he calls her on being a wuss, saying “I don’t know anyone in the whole world who would have hidden under the bed”), the actors’ fantastic chemistry and the incredible awesomeness of them both in performance and theory (mostly Jim, but both of them, but mostly Jim).

Elsewhere at ACN, Mack hires a sexy economist to do 5 minutes a night in place of the popular youtube and hollywood segments. I appreciated that said point about legitimacy was made without too much posturing about the shallow nature of entertainment news (when TV shows do that, the hypocrisy makes my head hurt) and Olivia Munn is so far pretty likable and believably smart in a role that is refreshingly aware of its own incredibility (unlike every other role that is played by an inexplicably hot person- here’s looking at you Mack, Jim and random bookers/interns). Also, Charlie’s been severely toned down from the pilot and is starting to resemble a character who might realistically be employed to run the news division of a multi-national corporation, so that’s certainly a step in the right direction (and Sam Waterston has taken leaps and bounds in the Sorkinese delivery department). And Dev Patel’s Neal got a tiny bit more to do this week, informing Will of a tragic story that could put a human face on this week’s recent-history-current-event, Arizona’s SB1070 immigration bill. Apparently when he saw who they cast in that bit part and Dev did a lot with his few lines in the pilot, Sorkin started writing to him more, so hopefully there will be lots more of Neal to come.

While merely a shadow of the boldly “SORKIN-esque” pilot episode, The Newsroom‘s second offering isn’t half bad. It mostly survives on its sense of humour and on the backs of those two wonderful, complicated, engrossing, crazy kids.