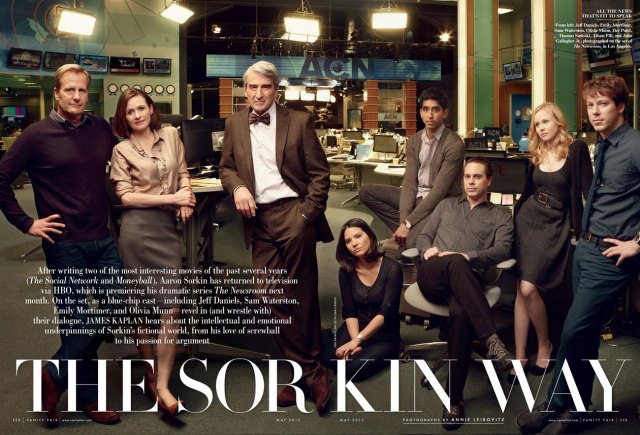 My expectations could not have been higher for The Newsroom. From A Few Good Men to Sports Night, The West Wing, The Social Network, all the way to The Farnsworth Invention, Aaron Sorkin has written almost everything I love. There is literally no writer like him in the history of English-language art (I mean it, his closest peer is Shakespeare, and, before you malign my hyperbole, know that I have an hour’s worth of evidence to back up that comparison). So, naturally, though it has its flaws, I adore The Newsroom already after tonight’s pilot. As the characters grow into themselves I have every faith that it will only get better. But for now I have one primary concern:

As an advocate of broadcast over cable, at first I didn’t see why The Newsroom needed to be on HBO, but Sorkin shows need to be written by Sorkin, not Sorkin’s staff, so nowadays he needs the time frame and freedom of a cable schedule, not to mention the hands-off approach to auteurism, higher budget and ratings patience. However, there will absolutely be people who hate this show for its politics and/or unflagging idealism, and I think that criticism will far outweigh the apathy of the folks who will call The Newsroom too much work for 10pm, and certainly the ones who would really just rather watch X Factor. Those last two groups aren’t watching HBO, but that first group is plenty threatening to the Sorkin brand. Cable is generally home to bad people, shady dealings and a tone that could be called perpetually sardonic. That’s largely because there’s a pervading attitude in criticism right now that says complexity and darkness are intrinsically linked. Think about the big cable hits (and I’ll include basic as well as pay): The Sopranos, Mad Men, Breaking Bad, Dexter, Weeds, True Blood, ….. they all have a stylish pessimism that Sorkin fundamentally rejects. He’s all about idealism, improving oneself and ones world, love and loyalty and the value of a well-intentioned smart kid. He is, as stated in the Newsroom pilot, really into Don Quixote and anything quixotic. Cable audiences don’t generally jive with that. It will be interesting to see if audiences respond to The Newsroom or if it does in fact turn out to be an entity that cannot survive alongside Veep (the cable show most like The Newsroom in subject, its opposite in tone). I want more than anything for The Newsroom to survive, but save some miraculous reversal in national attitudes, I think the only way it does is if Aaron Sorkin can save it on reputation alone.

That’s not to say the pilot isn’t fantastic TV. My one, and really only, gripe would be with Sam Waterston’s Charlie, the head of the network’s news division. Charged with some of Sorkin’s statements of purpose, Waterston isn’t as on top of the dialogue as the rest of the ensemble. Those are tricky rhythms and massive tonal shifts and Waterston, a veteran of simpler fare on Law & Order, isn’t as smooth yet as he should be. A random outburst here, a dramatic pronouncement there, Charlie doesn’t quite make sense yet.

On the flip side of that, Jeff Daniels is exceptional as newsman Will McAvoy. It feels like he’s been spouting Sorkinese for decades and his Will is particularly nuanced and complicated. This is where those cynic cable fans should turn. Will is a good guy determined to be better but he’s difficult and sometimes mean and a lot broken. After only the pilot, I’m fascinated to see where Will will go. Daniels’ foil comes in the unlikely form of Emily Mortimer. I was prepared not to like Mackenzie (Mortimer’s plucky, prestigious character) because, as the determined executive producer who gives speeches about Don Quixote and has a complicated romantic history with her on-air talent, I was expecting a Dana rehash (Felicity Huffman’s wonderful Sports Night character). But Mortimer is great and Sorkin’s done a fantastic job of retreading territory in a completely different way (as he always does- The Newsroom‘s pilot contains almost every Sorkin trope from Shakespeare and musical theatre references to the walk-and-talk to deeply loyal wunderkinds to baseball affinity to behind-the-scenes stories. The only thing missing is a character named Danny). Mortimer is all over her big speeches (which can be So Hard to deliver without sounding like a soap box) and idiosyncrasies and Mackenzie already holds down two of the show’s most compelling relationships. The Will-Mackenzie backstory is the obvious one with tons of tension and mystery built into the script, but Mortimer is particularly fantastic opposite her beloved senior producer Jim Harper (2007 Tony winner John Gallagher Jr). Their chatty co-dependence is fascinating and years together in the middle-east foxhole gives them an intimacy that doesn’t need to be explained but is awfully interesting to watch.

Gallagher Jr’s Jim, on his own, is probably my favourite character from the pilot (and so fantastically different from Moritz Stiefel, it’s hard to believe it’s the same guy) but it’s his relationship with Mackenzie that really sets him apart. The uber-talented wunderkind in a cast with multiple uber-talented wunderkinds (I’m excited for the lovely Dev Patel’s Neal to get more story and am already enchanted by Alison Pill’s associate producer Maggie), Jim is neurotic and funny and idealistic while also decently practical (something his neurotic/funny/idealistic wunderkind predecessor, Sam Seaborn, lacked. But Sam had those cheekbones, so…). Jim’s developing crush on Maggie has the potential to be lovely if it’s given plenty of time and room to fester. I’ve been fond of the great, understated Alison Pill for years and years (and she’s engaged to fellow Canadian Jay Baruchel!)  so I’m thrilled to see her take on a promising part like Maggie, especially considering her interesting dynamics with both Will and her problematic boyfriend Don (Thomas Sadoski, promising but an as-of-now underdeveloped character).

The flow of the Newsroom set is great and the visuals awesome (the frenetic movement of the teaser, the colour pallette, the beautiful photos of newsdesk heroes Murrow and Cronkite in the opening credits). The pacing is on point and the comedy-drama balance decent, though I will admit to missing Tommy Schlamme’s Sorkin-friendly direction at least a little bit. There’s also a fun little voice cameo from Social Network star Jesse Eisenberg that you’ll miss unless you’re listening for it. The mid-episode of reveal of just when we are in history serves as a sort of witty twist while also arming the audience with hindsight that lets us better evaluate the characters and their actions. I’m not that into Charlie and Don quite yet but the whole ensemble is already compelling and the standouts- Will, Mackenzie, Jim and Maggie- particularly standout.

What it all comes down to, really, is how much you like Aaron Sorkin. The Newsroom is well cast, beautifully directed and absolutely up to standard (falling somewhere between the brilliance of Sports Night season one/West Wing season two and less awesome West Wing season four/Studio 60; around American President territory). But while he’s internationally acclaimed and multi-massive-award-winning, Sorkin is really really not for everyone. In fact, he’s not for an awful lot of people. And if you are one of those people, just don’t watch The Newsroom. Maybe give it a one-episode try but please don’t watch it every week and every week complain about its preachy idealism and stylised, poetic dialogue. Just don’t. Because Sorkin is doing all that stuff on purpose, they’re not flaws, they’re his style; and Aaron Sorkin’s not changing for you or anybody else. So get on board, or turn off your TV and tune in next spring in time for season two of Veep.