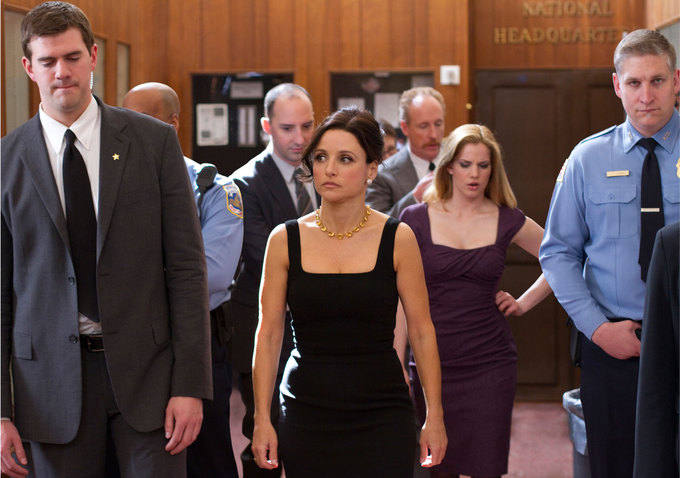 Full Disclosure: I’m a West Wing-raised political idealist. I believe in the determination to do good and the advancement of the smart kids. So I found Veep kind of depressing. It’s a behind-the-scenes story of a non-partisan Vice President (aka primary loser) whose staff is as useless and self-obsessed as she is. Come on, people, we live in the age of Obama– lighten up. My obscenely smart brother is in politics, and he would most likely weep at the sight of these patheticos far too high up in the ranks. But narcissist behaviour can sometimes make good TV (see, for example, star Julia Louis-Dreyfus’ iconic Elaine Benes) and loserdom can be a laugh riot (Raising Hope is priceless), the issue with Veep– more than the looming shadow of the great white house show of the past, more than the upsetting reality of watching powerful people let you down, more than anything else- is that it’s really not very funny.

Oh, it’s on HBO so there’s plenty of gratuitous un-PC jabber of the honest-to-god offensive kind and the basic desensitized swear word/sex talk kind. And maybe there are people out there for whom the sight of a polished political operative saying the word “tit” is thrilling enough to inspire a giggle, but I’m certainly not one of them. God, please, would someone throw me a well-crafted character joke or some smart-aleck wordplay? (The Newsroom– I’m ready for you!). A bit about the cover-up when VP Selena Meyers used the word “retard” was the plot highlight of the pilot and a close-call with the unseen President’s would-be heart attack brought the titular Veep to the White House situation room in episode 2’s slightly better scenario. The second episode was, for sure, an improvement on the first- a feature of many a wonderful show that just had a shaky pilot- but I’m still not quite convinced. I like Reid Scott’s manipulative upstart communications advisor (mostly because I love him- partly from The Big C, mostly from My Boys) and Anna Chlumsky’s chief of staff has quickly become a scene-saver with her always-amusing reaction shots. But Tony Hale- only particularly funny in Arrested Development– was tiresome within minutes and I’m finding Julia Louis-Dreyfus bland and uninspiring in a role that makes or breaks the series.

The bottom line, after 2 episodes, is that Veep has a slight possibility of growing into something pretty good. I’m quite convinced it will never be great, but the second episode showed that it is, at least, getting a little bit better.