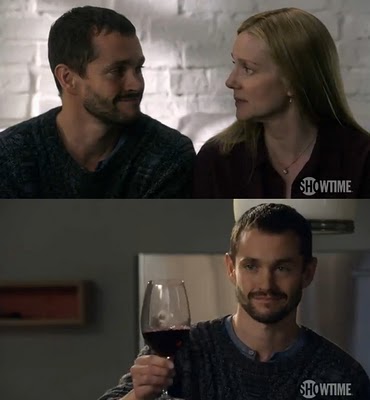 Season Wrap Up: The Big C

Today I was asked a question that I’m asked quite often: what’s your favourite TV show on the air? I barely paused before giving my answer: there’s nothing currently airing that’s as touching or achingly real as the genius of The Big C. For half an hour a week I completely lose track of everything but Cathy Jamison and and her fight for happiness, fulfillment, love and survival. It’s a show unlike any other and in season two it reached new heights.

We began the season with Cathy’s decision to fight, something she resisted for much of season one. As she embarked on a clinical trial led by a distant and methodical Alan Alda, Laura Linney’s Cathy embraced the concept of “going out ugly” and began to cherish the idea of losing her fingernails, no matter how unpleasant (because it meant the drugs were working).

In the trial, she met the character who made season two more than just excellent. As played by Hugh Dancy, Cathy’s “molemate” Lee quickly became my reason for turning on the TV every Monday night. The achingly real character was made up of label after label (“gay”, “Buddhist”, “wine connoisseur”, “athlete”, “dying”) none of which ever pined him down to any sort of defined existence. Lee was achingly real and painfully engaging, the sort that you love so instantly and so fully that you know it’ll end in heartbreak. *spoiler alert*. And I assure you it ended in nothing less; I’ve never cried so hard as when Lee slipped away, calling Cathy to his side so he could say goodbye to his soulmmate. I love the idea of an unromantic soulmmate and without threatening Paul, Lee was just that in Cathy’s life. From his snarky first appearances to the warmth in his silent “thank you” to Cathy as she crossed the finish line of his marathon, Lee’s arc was the best thing about a spectacular season of television and I will forever love Hugh Dancy for so perfectly bringing him to life, however temporary.

Some of the other storylines were less inspired. As much as I love Gabourey Sidibe (seriously, that girl is damn cool), the writers are having to bend over backwards to keep Andrea involved in the story. Her romance was interesting but a little lightweight, ultimately just a distraction from the weightier plots (after all, this show is still pretending it’s a comedy). Adam’s quest to grow up too fast (and that ridiculous plot involving Parker Posey) undermined the interesting things the excellently subtle Gabriel Basso was doing with his grief and avoidance. Paul’s financial struggles had their moments, but his getting lost in theft and drugs, though appropriately desperate, were a bit much. *spoiler alert* His subtle throughline about his own health, on the other hand, beautifully foreshadowed the season finale’s tragic reversal without making it come out of nowhere or crop up as merely a result of his new cocaine habit, which I appreciated.

As for my favourite series regular, season two was an important one for the character of Sean (the genius John Bejamin Hickey). Motivated by the prospect of being a father, Sean made a concentrated play for sanity this season, resulting in a less broad and even more complex character for Hickey to take hold of. Balanced by his girlfriend/fiancee, the slightly-off Rebbecca (played with great neurotic nuance by Cynthia Nixon), Sean filtered his insanity into a wave of enthusiasm that all came crashing down in the most resounding of ways at the absurd funeral for unborn baby Cathy. Sean’s subsequent disappearance and the effect it had on his sister was a remarkable and brave story to tell, sending one of the series’ most popular actors away for a multi-episode arc. And his warm and reassuring return came at exactly the moment when what the show and Cathy really needed was a hug from Sean and the hope that it might be okay.

I can’t say enough about The Big C. The amazing cast, the superb writing- it’s just remarkable. There are few shows ever produced that can move me like The Big C can.

Finale Grade: A
Season Grade: A+