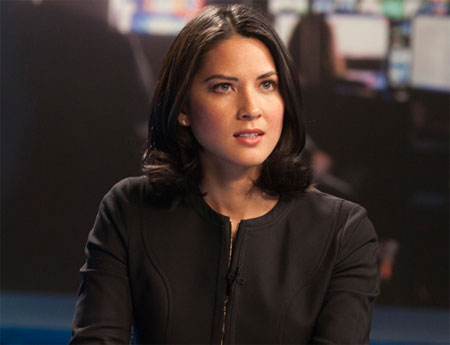 “Bullies” was the darkest Newsroom episode yet as Sorkin used an insomnia-prompted therapy session to explore a bit more of the darkness in his principal “hero”. The format is a winner, as we’d already learned from a pretty good Sports Night episode and a spectacular West Wing episode (season two’s “Noel”- one of television’s greatest outings) and the episode one of the series’ best so far.

There was no principal “story of the day” that needed moral-high-ground coverage. Instead, Will was busy dealing with a death threat that came via a comment on his website and the ways in which his own screwed up, bullying behaviour affected two other characters (one a regular, one a guest). Maggie and Jim got no story aside from Mack ordering them to do “opposition research” on Will to help her fend off incoming TMI attacks. The research storyline didn’t lead to much aside from Will making Mack feel even worse by pretending he had been ready to propose to her back in the day of the World’s Most Important Cheating Scandal and the moment in which Don finally sees the chemistry between Jim and Maggie and breaks down, asking Sloan if he’s losing Maggie (a lovely, inevitable moment). This was all sub-subplot, as it absolutely should be. Keeping it in the sub-subplot allows Jim and Maggie to slow down their rushed slow-burn, keeps Don’s heart from being shattered too fast, and pushes the Mack-Will drama further outside of the office- all good things.

The main action (as it informed the main-main action/frame device of Will’s reluctant therapy session with David Krumholtz, aka, This Guy!) centered on two on-air interview disasters. The first belonged to Sloan, a quickly improving character who is just now getting her footing. When Elliot can’t make the 10pm broadcast, Don asks Sloan to fill in and she turns to Will for help. Being Will, his advice is draped in condescension and unnecessary intensity, which sets Sloan up for an interview failure involving a spokesman claiming off-the-record that the Fukushima INES level was a 7 then on-the-air claiming it’s a 5. The story hit on the oh-so-popular “white male supremacy” accusation that lazy critics always want to hit Sorkin with (literally, I was just looking up reviews of “Bullies” to make sure I got the Fukushima terminology right and I found 7 articles all desperate to say the same, simplistic thing). Everyone was so upset when Sorkin called a reporter “internet girl” back in June, so he hit on it here when Charlie- flying into a typical Charlie rage, this time about Sloan screwing up on air- called Sloan “girl”, to which Sloan fantastically replied with “do not call me ‘girl’, sir”. The characters then reach a crossroads in which the only way to save Sloan and the spokesman she interviewed’s jobs is to have her lie on air and claim it was an honest mistake instead of a conscious but misguided decision. Basically, they want Sloan to say she’s not as smart as she is- that her Japanese isn’t perfect, that nuclear things are hard to understand, that she is in fact “girl” and not “Ms. Sabbith”. It’s a grossly misogynist and condescending story. And it Never could have been written by a misogynist- it’s too self-aware for that. Sloan knows it’s wrong, Mack knows it’s wrong, hell even Will knows it’s wrong but Charlie is a problematically tempered, old-fashioned, black-and-white drunk and therefore the only person who would ever have come up with that solution. It’s about the world not being fair and the fact that sometimes smart people look stupid for reasons other than their being stupid, out of necessity. I wish Sorkin would find another incompetence joke target other than Mack but the point is still that the men (except Don, who is pretty good in the situation, considering it was his voice she ripped from her ear when “going rogue”) are bullies, not that the women can’t hold their own.

What grumpy viewers STILL (how?!) aren’t getting is the mea culpa factor in Sorkin’s writing (especially his writing of Will). People seem to think that because he’s the closest thing the writer has to a proxy character that he thinks Will is a saint (because apparently he thinks of himself as perfect? Have you ever met a recovering addict of whom that was true?). But this episode made Will say out loud what I’ve been saying for a month now but apparently viewers have been missing, that he’s a bully. And if we know anything about our stubbornly post-modern world it’s that bullies are the basest form of human life. Will was the villain of The Newsroom this week. Do you understand yet? Still no? Try taking another look at his on-air interview with the former Santorum advisor. Yes, the ending is a little flimsy (as though Sorkin chickened out and thought the viewers might abandon Will if he didn’t have the last word- he’s never been good at reading his audience, that’s horrifyingly clear) but the bulk of the piece is about how simplistic Will’s view of villainy is, how narcissistically self-righteous he is, how absurd his hero complex seems to adults fully capable of saving themselves. It was a fascinating argument- delivered Beautifully by Damon Gupton- that puts Will in his place for being the blowhard that he is. It should be pointed out that here, as is often the overlooked case, Mack serves as the smart but kind voice of reason.

In the most predictable twist in the world, Will is revealed to have had an abusive alcoholic father. Father issues are common with Sorkin, as are alcohol issues and stories involving therapists who unravel a non-linear episode narrative. But it’s predictable, not offensive and I really think this episode Has to be the end of that hare-brained argument. You can say the show is bad if you honestly believe that, but I’m sick and tired of you saying it’s wrong. Watching the following speech and saying the show (not Will, the show) is condescending is like listening to Shylock in 3.1 and saying The Merchant of Venice is anti-semitic (yes, there are characters who are, but Shakespeare didn’t think the audience should be). That’s simplistic and narrow-minded and, frankly, something Will McAvoy would say. And I know how much you guys love him.