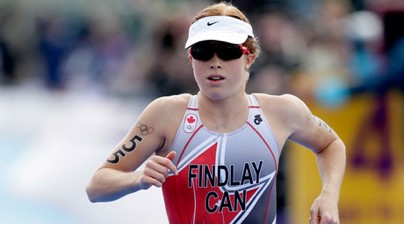 Olympian Of The Day: Paula Findlay

It’d be hard to find a more heartbreaking finish for a triathlete’s Olympic debut than that of Paula Findlay.

After missing a few pre-games races due to a hip issue, Canadian Paula Findlay had a disappointing last place result in London’s Triathlon, coming in more than 12 minutes behind the photo finish. With the fans cheering just as loudly as they had for the winner, those attending gave Findlay a round of rousing applause for refusing to drop out. She later said she owed it to her supporters to finish.

As seen with Hamadou Djibo Issaka in the rowing event and again here, fans are quick to their feet to offer respect and compassion for athletes who give their all to finish the race and never quit. This is a very positive trend in this year’s Olympic Games and I for one am very pleased with the message that is being sent to our kids, that finishing the race and doing your absolute best is sometimes better than winning.

After the race, a disappointed Findlay apologized to Canadians for not doing better in her first Olympic appearance. She has nothing to apologize for. If I may speak for Canadians across the nation, we are very proud of her for her efforts and her refusal to surrender. Thank you Paula for proving to the world that the word quit is not in the Canadian Vocabulary…

Editor’s Note:
My Entertainment World would also like to recognize Brent Hayden on the occasion of his final Olympic race. The Canadian relay team may have come in last place in today’s finals but the country’s best swimmer finished out the race as hard as he could in the freestyle lap, days after becoming the first Canadian to ever medal in the 100m freestyle (with a bronze). One of Team Canada’s most compelling characters, Brent’s was a hard-fought path to the podium and the country will miss him in 2016.

On a personal note, I would like to congratulate Alex Bruce (of Bruce-Li fame) on her outstanding display in the women’s doubles badminton, finishing in fourth place after a controversy-filled games. The 22-year-old Canadian is, like myself, a Bishop Strachan School old girl and we couldn’t be prouder of her. Way to go, Bruce!