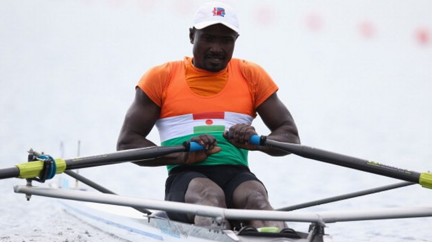 Since we’re starting this feature a little late, I am going to pick one person to highlight from the first four days of competition in London, then go from there. Based on what I have seen so far, the winner of our very first Olympian Of  The Day is a no brainer: Nigerien rower Hamadou Djibo Issaka.

The thirty-five year old from Niger in West Africa only started learning how to row three months before the London games. The first from his nation to compete in this sport, Issaka finished last in his heat far, far behind the rest of the boats. Despite the fact that he finished more than a minute behind the winner of that race, he received cheers and applause from the audience in attendance for rowing as hard as he could to finish.

Encouraged by the crowd and their support, this is what the Olympics, at their best, are all about: people from all over the world coming together to compete in sports without any politics getting in the way. Issaka’s journey to the games and his unwillingness to give up even though he was guaranteed a loss is far more inspirational to the kids watching at home than a cocky swimmer winning a millionth gold medal could ever be.

Like the Jamaican bobsled team or Eddie the Eagle, Issaka proved to those watching that there is more to the Olympics than just winning. The spirit of the games was down there at the rowing event and I couldn’t have been more proud of the people in attendance that recognized the effort being made and rooted for Issaka to finish the race and win something more valuable than any medal: self respect.

Word is Issaka has every intention of competing again in four years and I, for one, look forward to seeing him do just that. His example will be a shining light to inspire others in many nations like his own in Africa to try the same and maybe we’ll see some of them at the next games.

So here is my first pick for Olympian Of The Day: Hamadou Djibo Issaka, for winning our hearts instead of a medal and reminding us what the games are really about.