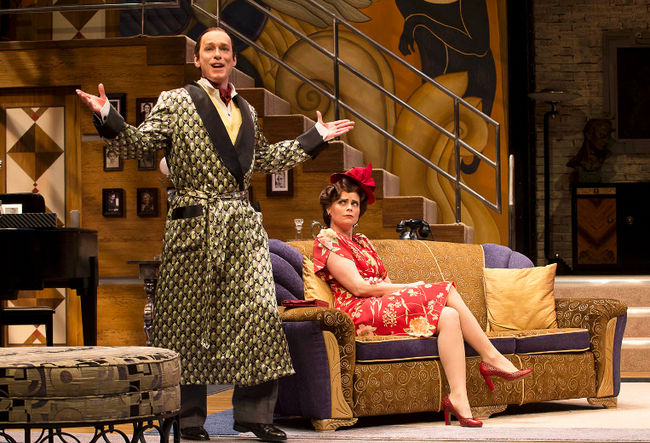 At the Shaw: Present Laughter

Present Laughter isn’t particularly remarkable. It’s a pretty standard Shaw production despite being written by Noel Coward and not George Bernard Shaw (who only wrote two plays slated for the 2012 season, actually). The costumes are pretty, the set is impressive if not interesting and everybody has British accents. Shaw’s Festival Theatre is a typical proscenium arch- more like Stratford’s secondary theatre The Avon than its innovative Festival Theatre- the same thing as The Royal George, just bigger. Comfortable seats and nice lobby aside, the only standout allure of Shaw’s Festival Theatre is that it’s where the company places the shows they expect to sell the most tickets and generally be pretty good. That’s why Ragtime‘s there (because it’s excellent) and His Girl Friday (because it’s famous). So the fact that the Noel Coward comedy about a lonely egomaniac was the lucky third play chosen to fill the biggest theatre at the festival shows the kind of faith the poohbahs have in this production.

They’re half right in having that faith. Director David Schurmann and designer William Schmuck  don’t do much with Coward’s funny-but-not-THAT-funny, insightful-but-not-THAT-insightful text aside from basic high-standard execution (everything looks nice, everything works fine). Neither Schurmann nor Schmuck made any poor decisions in translating Present Laughter from page to stage, but they didn’t make many particularly interesting ones either. What success the production does have in entertaining its audience comes from its cast.

Julia Course is funny but repetitive as Daphne, the silly one-night-stand who won’t go away; Corrine Koslo mostly disappears under a very broad “quirky European maid” caricature (she has a name, Miss Erikson, but she needn’t); and Jonathan Tan is an obnoxious crowd-pleaser in the play’s most useless role, Roland Maule (meaning I thought he was obnoxious and useless, but everyone else was Loving him so what do I know?). But from there it’s smooth sailing with Moya O’Connell in the sly seductress role 2011’s Maggie the Cat prepared her for so well and Mary Haney is great as the quick-tongued secretary keeping the proceedings sane. Claire Jullien is also wonderful as the witty and tough Liz Essendine, but it’s her former/future(current?) husband Garry Essendine who runs Present Laughter. As is the case with any megalomaniac leading man, Garry speaks almost constantly and spends almost every minute on stage. When he’s not there, the other characters are talking about him, thus Present Laughter lives or dies by whether or not Garry Essendine- an ageing matinee idol so “charming” that no one, including himself, really knows who he is- is worth talking about. I won’t keep you in suspense any longer- Garry is played by Steven Sutcliffe, and you all know how I adore Steven Sutcliffe, so you can probably fill in what I’m about to say next. My favourite Shaw actor doesn’t disappoint here, playing Garry with go-for-broke self-loving nerve and just a touch of nagging loneliness underneath his every grand gesture. Each act is separated by a long curtain-closed transition, a directorial misstep aided only by Schurmann’s clever idea of recording Sutcliffe singing Cole Porter songs to play during said ridiculous transitions. Sutcliffe’s singing voice being beautiful and strong as it is, the effect is that the audience gets a sense of Garry’s legendary talent, saving the character from seeming even more disproportionately full of himself. Garry has to be ridiculous but likable enough to carry the show, and Steven Sutcliffe is effortlessly both those things.

The Cole Porter songs (and the Twelfth Night song from which Present Laughter gets its name) were my favourite thing about this production. I didn’t actually dislike it, it’s just that the songs were the only thing that really stood out. Without them, the takeaway lesson from my experience with Present Laughter would have been ever more clear: if you want me to like something without putting in the directorial work, just cast Steven Sutcliffe and he’ll certainly make it work.