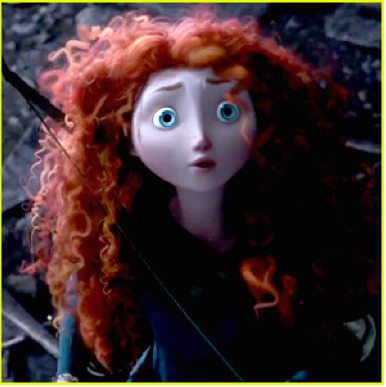 I wish I knew what it would feel like to walk into a screening of Brave knowing nothing. Although I would miss out on the little somersault my stomach does whenever it sees Pixar’s little lamp mascot pop out of frame, I wish I could experience Brave knowing nothing of Up and Wall*E, Tangled and Cinderella. I wish I wasn’t analyzing children’s film history, and Pixar-specific history, from frame one.

But I am. And so it behooves me to point out, up front, that Brave is not like Up or Wall*E or Toy Story. It didn’t redefine children’s storytelling. It didn’t (at least not until the last twenty minutes) explain something amazing to me about the human condition. And it wasn’t as structurally daring and inventive as those other offerings.

Is that enough? Did I sufficiently cage the torrent of praise that’s about to follow?

Brave is stunning, breathtaking beauty rendered across a 3D landscape that carries shades of the real world but feels perfectly imaginary. And Merida, its curly-haired star, is a fantastic, kicky, whiny creation.

It takes a while for Brave to get there (I wasn’t really breathing much for the first thirty minutes, so scared was I that this movie was going to fail me), but it’s also a pretty cool reinvention of the princess tale. Gone are the love interests, the quirky anthropomorphized animal sidekick (okay Merida’s horse is pretty badass, but it’s hardly on the level of Raja or those singing mice), the evil witch or stepmother. In their place is a surprisingly nuanced look at the relationship between mothers and daughters, and the role of obligation among our dreams.

A lot has been made about the fact that Merida is Pixar’s first female protagonist, and I was very ready to dismiss this line of reasoning (for one thing, I’m pretty sure Wall*E doesn’t have a gender), but there is something remarkable about what Pixar does with such decidedly feminine themes. Although Merida is a tomboy force of nature, she is celebrated as much for her garnering the skills of empathy and diplomacy as she is for her Katniss Everdeen-like archery acumen. And her mother, although somewhat over-fond of tradition, is a hero precisely because of things that make her feminine: her caring nature, her manners, her absolute dedication to her children. In contrast to recent fairy tale adaptations, Brave manages to actually create a post-modern, well-rounded female protagonist, capable of protecting herself and others. And the complicated, fraught, loving relationship between mother and daughter portrayed in the story is purely feminine in a way that most mainstream movies don’t seem capable of. Brave is a girl’s movie, even as it could easily be enjoyed by males, and that actually is remarkable.

Plus, it’s fun. It is soaring adventure between mother and daughter, battles, races, and adventures to be had against a gorgeous Scottish background. There are many things that Brave is not, but it is unmistakably Pixar. Devoid of all its baggage, it’s also a fantastic movie.