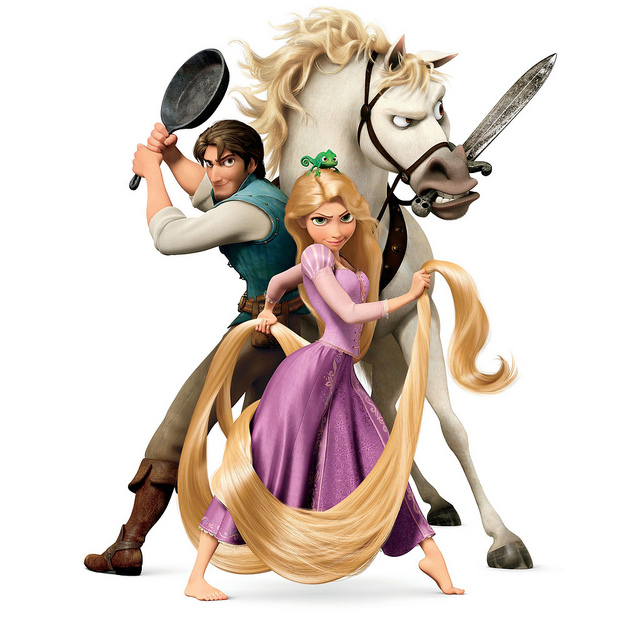 I have a confession to make. Despite years of soccer-playing, action-figure-collecting, comic-book-reading, action-movie-loving tomboy-ery, I’ve always, truly, wanted to be a Disney princess. But I didn’t want to be just any princess: I wanted to be Belle, the confident heroine who ultimately saves herself and her love with her brains and good heart.
This is hardly a unique statement. Generations upon generations of girls the world over have day dreamed about being a disney princess. But it’s the neccessary context around which to understand my reaction to Disney’s Tangled.

The newest Disney film follows Rapunzel (Mandy Moore) and Flynn (Zachary Levi) as they evade a wicked wit, uh Old Lady, chase their dreams, banter, interact with adorable anthropomorphized animals, and, inevitably, fall in love. It was cliched before Enchanted came out and set it in the real world, but it definitely feels worn in this hour of post-modern Shrek-ery and Pixar films.

But god damn. That so doesn’t matter. The beauty of a true Disney film is not in the shocks of the plot (although Tangled is an excellently constructed story), but in the magic that floats off the screen. The animation is top-notch, the voice work across the board excellent, and the songs (as drafted by Disney vet Alan Menken) are fantastic.

top of that, Rapunzel is a heroine for the ages. The movie feels at once classic (there’s no meta-winks at the camera, no irony to be found here) and modern (yet the film doesn’t feel the need to relegate Rapunzel to a pre-Mulan damsel in distress mode). As voiced by Moore, she’s spunky, intelligent, innocent, engaging, and active, constantly working towards her own freedom and her own happy ending. If the feminist in me has always had a sort of love-hate relationship with the princess side of me, both sides happily coexisted while I was in that theater.

A lot of reviews I’ve read feel the need to explain now what Tangled isn’t (oscar-worthy, a Pixar film, going to cure cancer), as if the reviewer feels a little ashamed of how much they fell in love while in that movie theater. But screw it. If my life was the Disney movie I wish it was, then walking out of that theater I was in full blown ballad-mode, and not the beginning, heart-felt longing ballad, but the near end of movie I’m so happy my head could burst ballad. And if that’s all a movie has to give me, I feel no need to appologize for my adoration of it.

Disney recently announced that Tangled is the last of their princess movies, and seeing the film made me realize what a shame that truly is. It isn’t just the songs or the pretty dresses or the cute animals; it’s the princesses themselves who, when done right, are much better than just future dolls, they’re the fully-realized version of who we wish we were. and as long as the princesses are as fantastic and interesting as Rapunzel, that’s a good thing.