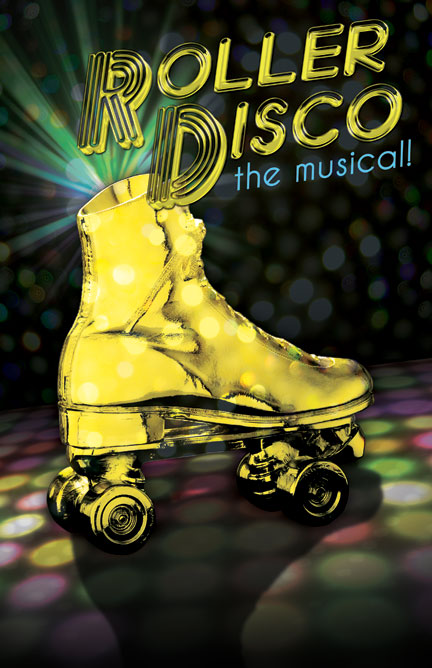 It’s not often that you see a parody of a parody; the style is a difficult skill to master. First, the audience needs to understand the source of the original parody, and only then, the audience needs to understand the references to the original parody. Honestly, it’s difficult to separate what’s the parody of what. Fortunately, Roller Disco: The Musical! rolls through with enough punch and pizazz that it doesn’t matter whether the audience understands the source of the jokes. All that matters in this laugh-out-loud parody musical is that the cast and audience are having fun. Man, it’s a thrill.

Club Oberon is a “totally tubular” venue for any performance. I suggest coming early to the show and enjoying a drink; the wait-staff are super friendly and the show whizzes by with a drink in hand. Part of the appeal of this venue is the versatility of its performance space. It’s a director’s dream, and Jen Wineman does an exceptional job directing and choreographing the production for the venue’s unique spaces. The scenes flow seamlessly from one to the next, and the action zooms around your table. Kick back and have a drink.

Yes, this production is on roller skates, a la Starlight Express. But unlike the iconic but forgettable 1980s musical, Roller Disco’s use of roller skates makes sense within the story. These teenagers compete in a roller disco. And they’re a talented bunch! Most impressive is Ahmad Maksoud as leading man Johnny Max. Maksoud is not a typical leading man, yet he shines with charisma and skill. His acting is superb and his consistency outstanding. But he really excels in his chemistry with Jacqui Grilli, who plays the leading lady Debbie Sinclair. Grilli skates a delicate balance between the ingénue and a real teenager. The dichotomy and Grilli’s ability to alternate between the two extremes is what makes Grilli a strong performer, especially in this production. Grilli and Maksoud develop a reciprocal energy and relationship as performers, and their passion drives the performance forward. Kudos to both actors for making a real commitment to their relationship, despite the parody genre.

The real talent in this production is the especially strong ensemble who play the supporting roles and ensemble. Stand-outs are Mariah MacFarlane, especially as Virginia Sinclair, the pill-popping, advice-giving, and hilariously oblivious mother of Grilli’s Debbie. Equally magnificent is Kenneth Miller as MacFarlane’s stuffy husband, Rodney Sinclair. Their ability to play off each other’s quirks show both strong comedic timing but also an ironic depth and understanding in their relationship. This unexpected nuance is what sets MacFarlane and Miller apart from their equally talented cast mates. Also surprising was Claudia Yanez, a young ensemble member who is a spitfire onstage in group numbers; while she is almost too dynamic for her small role, she’s just too damn good to fault her. Marissa Rae Roberts, as Debbie’s knock-out gorgeous friend Donna, is the best I’ve seen her and she manages the humor with ease; I just wish she sang more! I thought DJ Petrosino, as Fredo/Frederick, and Kenard Jackson, as Rad/Ida, to be mostly forgettable with some clever moments, most notably Jackson’s campy turn as black maid Ida. Equally talented but forgettable was Mark Mauriello as Foster, the token “gay” best friend. I’ll have to blame my unfamiliarity with the original source to why I found some of these characters forgettable, but I also saw MacFarlane and Miller rise above their sources and create characters that parodied a stereotype with a little heart. Overall, I can nitch-pick after the show, but during the performance, the cast is just too damn fun.

The songs are mostly catchy, up-beat numbers, though one person in my group critiqued that she would’ve liked to hear iconic numbers, similar to a jukebox musical. I think a lot of the humor came from the clever book, though the score was a little lacking in interesting numbers, with the exception of a few solos, especially Blocker Mahoney’s number, convincingly sung by Kevin B. McGlynn. I would like to hear a few more revisions before they take it out of Boston, and I think this cast is strong enough for them to do some re-writes to scenes in Act 1 before taking it to New York.

Finally, the lighting design by Daniel H. Jentzen was superb, especially during roller disco scenes, and the projections were particularly effective for the multitude of locations. Melissa Trn’s costumes were also particularly good, authentic to the period and equally as flattering for each cast member. These outfits really fit each personality while making the character “pop,” especially in making the characters extra sexy. Overall, the success of the production is due to the strong ensemble lead by Jen Wineman’s extremely capable and nuanced directing with stellar choreography. If you’re looking for a fun night in a comfortable venue, look no further than Club Oberon’s newest show Roller Disco: The Musical! with its limited engagement until August 30.