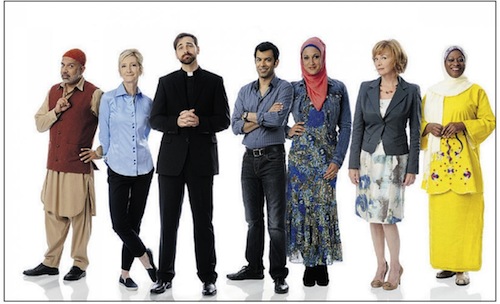 Series Wrap Up: Little Mosque on the Prairie

Little Mosque on the Prairie is largely considered one of Canada’s greatest TV shows. In terms of quality, I don’t know, the pickings are pretty slim and other than maybe Being Erica and Rookie Blue there are few Canadian shows that consistently could compete in the American market (Slings & Arrows, yes, is one of my all-time favourite shows, but the writing and performances are so uneven that it simply can’t factor into this discussion). In terms of content, absolutely I’ll let Little Mosque claim the title of Canada’s best. By “content” I don’t mean the strength of the dialogue and character arcs or the merit of individual plots- those things were pretty weak, actually, especially in later seasons- I mean the foundation of the show and what it was about.

Little Mosque, in its most basic form, was the sort of show that really represented who Canadians are. We’re people who don’t think it’s odd at all to have a leading man of Pakistani descent- Amaar’s from Toronto, that’s all the geographical upbringing information that really matters. The modern Canadian viewer is also likely to immediately buy into the character of Rayyan- she’s a devout Muslim, an outspoken feminist and a capable doctor, descriptors that many people believe to be incompatible, but simply are not. But Little Mosque wasn’t all happy-go-lucky, inclusionary Canadian attitudes. Like the country itself, the show had idiots of all kinds: Baber, a doofy Islamic extremist, and Fred, an ignorant Christian blowhard. There was the Mayor, a woman so outrageously selfish that her lack of prejudice was less enlightened than it was apathetic; Reverend Thorne, who was more interested in keeping his attendance numbers up than doing the right thing; and Sarah Hamoudi- an Islamic convert whose adherence to the rules of the religion was loose at best. It was Little Mosque‘s representation of people who aren’t often represented- religious folk of all kinds, Muslims in particular, people from small town Saskatchewan- that made it special and their representation as both positive and negative figures was all the more impressive.

Had Little Mosque been just a little bit better (sometimes the writing was so pedantic I wanted to scream), it could have been great. Unfortunately, it just wasn’t. The plots of each episode were rarely ones that hadn’t already been played out on every predictable sitcom ever made (Amaar can’t admit he doesn’t know how to fix the plumbing? Really?) and the characters barely grew at all. The wonderful friendship struck up between Baber and Thorne was a rare example of character growth (especially because it came in that dreadful final season). As the finale approached, I remember sharing my predictions of what the final episode would hold. Annoying, predictably, depressingly, the Little Mosque finale was quote-by-quote obvious. *spoilers ahead* After Sarah’s accidental destruction of the Anglican Church (and home of the original Mosque), the Church- in an on-the-nose reversal of the pilot that was simply inevitable- took up residency in the basement of the new Mosque Amaar had built. Mayor Ann Popowitz finally got married, Sarah re-devoted herself to Islam and Rayyan announced she was pregnant- duh.